This is an auspicious moment for a column's birth. But, with all the immodesty of a boundless newborn, it would like to set aside, for a week or so, Pakistan's tour of India... 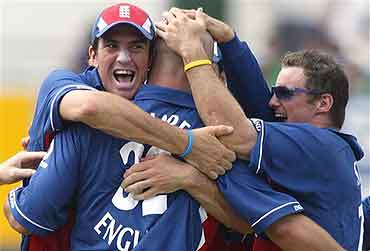 This is an auspicious moment for a column’s birth. All the nakshatras are impeccably placed. And they point to two countries, which have fought four overt wars in the last 58 years, resuming their chequered cricket rivalry in three weeks.

However, with all the immodesty of a boundless newborn, Reverse Swing would like to set aside, for a week or so, this battle between India and Pakistan and look ahead, a long way, to July 21, when the first Test of this year’s Ashes series begins at Lord’s.

Pakistan’s tour of India, during which they will play three Tests and five one-day internationals, will be, like all India-Pakistan encounters, packed with emotion and charged with emotion. It will also showcase some fine cricket. Yet, regardless of the outcome, it will not change the world order. For any encounter to do that, Australia must be a party to it.

Theoretically, such encounters will take place when Australia visit New Zealand next. But, going by how New Zealand were demolished when they played Tests in Australia late last year and, before that, in England, they will be lucky to get away with half their limbs intact.

That brings us to the Ashes, which five successive England captains have failed to win since Mike Gatting’s men triumphed in 1986-87. All of England’s defeats since then have been tame, to the extent that Australia are largely understood to have held at least four generations of England cricketers in a psychological snare.

The build-up has started in earnest. Npower has conducted a survey in which 80 per cent of Britons say they expect England to win the Ashes. Former Pakistan all-rounder Wasim Akram believes the Ashes "could go either way". According to Ian Botham, it will be the closest since the triumph of Gatting’s side.

Australian crowds, watching Tests against Pakistan, cheered whenever news came in about England losing wickets in South Africa. Australian captain Ricky Ponting admits to staying up late to watch the second and third sessions of play in South Africa after ending his own day’s play against New Zealand and Pakistan.

All of this is warranted. The year just gone by has been extraordinary for English cricket. The national team did not lose a single Test during the year. Its victory in the first Test in South Africa was a record eighth consecutive. It rose to number two in Test rankings as compared with its place towards the bottom four years ago.

More importantly, what promises to quench the mass thirst for a credible opposition to Australia – now that India have been vanquished in their own backyard – is a rise of match winners in the England team: Andrew Flintoff, Stephen Harmison, Andrew Strauss, Matthew Hoggard, Michael Vaughan and Marcus Trescothick. And now, they have started the year by becoming only the second side to beat South Africa in Tests on their own soil. (Australia won there 1997 and 2002.)

Yet, ironically, the 2-1 victory in South Africa portends that while England may present a credible opposition to Australia, they are unlikely to do any more than that. Everyone expected England, a side on the up, to beat South Africa, a side in downward transition. Yet, the Englishmen made a royal mess of it, losing the third test in Cape Town by a whopping 196 runs and conceding the first innings lead on more occasion than one.

As Lawrence Booth pointed out in The Guardian, England had gone off the boil before each of the last three Ashes series: against India in 2002, Pakistan in 2001 and Sri Lanka in 1998. This time, they have won in South Africa, but failed to provide fireworks in team performance or flare-ups in individual brilliance save Strauss, Hoggard and Flintoff. These three, and Trescothick at times, were frequently called upon to perform either the winning thrust or a rescue job. In short, England have won a series in which they, as a team, played less poorly than their opponents.

Australia, on the other hand, have conquered the Final Frontier and demolished Pakistan and New Zealand. All three vanquished sides can present searching questions to England.

Still, what will hurt England most is that their best Test batsman and bowler, Vaughan and Harmison, appear to have misplaced their bearings. On occasions last year, they were ranked number one in their disciplines. But what we saw in South Africa were pale shadows of those giants that lorded over cricket fields in 2004.

In sharp contrast, Australia’s two most potent weapons, Glenn McGrath and Shane Warne, have made triumphant returns. Michael Clarke is the brightest star destined for greatness. And the Waugh Brothers are associated with fond memories rather than painful vacuums.

The silver lining for England lies in the laws of probability. Australia cannot win forever. But any side aspiring to beat Australia ought to have eight or nine players performing over five days. Most of England’s recent victories were even contests on the first three days until the opposition wilted on the fourth or fifth. Australia are unlikely to lengthen this pattern. They wilt when extraneous factors, such as the Mumbai pitch, become a distraction. They have never been very happy at Headingley. But the ground is not hosting any Test this Ashes.

Ponting has already pointed out how previous England sides have promised more than they delivered facing Australia. Post South Africa, McGrath’s boast that the Ashes could be very close, ending in Australia’s favour with only a two-Test margin, has begun to look like a prophecy. And Adam Gilchrist’s wish that he should never be a part of an Australian team surrendering the Ashes may still be valid by the time this year’s winner is decided.