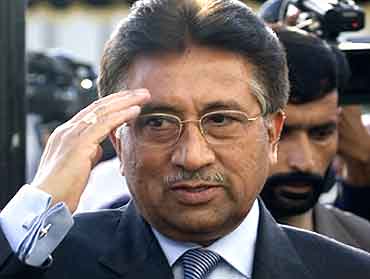 "Whatever be his past attitudes, Gen. Musharraf would be keen to improve his image in the US and to remove perceptions of his proximity to the religious extremists, the Taliban and Osama bin Laden. Though he accused Mr Sharif of being amenable to US pressure, he may not be as insensitive to US concerns over various issues as one would be led to believe from his past record. India needs to wait and watch the evolving situation, while avoiding any open expression of anti-Musharraf views and concerns. Maintain a rational and healthy watchfulness, but avoid irrational fears and reactions, which could prove self-fulfilling. That should be our policy for the present."

Remember how the people of Pakistan sang and danced in the streets on October 12,1999, when the then Chief of the Army Staff (COAS), Gen. Pervez Musharraf, took over as the Chief Executive after overthrowing Nawaz Sharif, the elected Prime Minister?

They did so not because they liked Musharraf, but because they were fed up with their political class in general and with Benazir Bhutto, Asif Zardari and Nawaz Sharif in particular. Corruption, misgovernance and arbitrary rule became the leitmotif of 11 years of political rule under Benazir and then Nawaz.

To add to Musharraf’s woes, his co-operation with the US in the so-called war against terrorism proved a kiss of death. It was unpopular not only with the religious fundamentalists, but also with large sections of the liberals, who attributed Pakistan’s growing instability to the public anger over his perceived closeness to the US.

The realities are grim enough to demand a statesman of clarity and vision at the helm of affairs. There is none on the horizon. Zardari and Nawaz are not statesmen. They are no-holds barred politicians.

Till now, they presented a façade of unity lest any discord between them should redound to be benefit of Musharraf. Now that Musharraf is gone, more and more discord and less and less unity will be the order of the day.

Discord is likely on the following issues:

The political equilibrium in Pakistan could change if the loyalists of Musharraf in the PML (Qaide Azam) flock back to the PML of Nawaz Sharif. Zardari’s position could be weakened, making new elections unavoidable.

The Army’s anti-India reflexes were kept under check by Musharraf. It is doubtful whether either Zardari or Nawaz will be able to do so as effectively as Musharraf did. The temptation to profit from the fresh difficulties of India in Jammu &Kashmir will be difficult for the Army and the Inter-services Intelligence to resist.

India should continue with the peace process with Pakistan. It should build bridges with all sides of the political spectrum there. It should co-operate closely, but discreetly with the US and Afghanistan in monitoring the situation and avoiding nasty surprises. The US still has the capability to exercise moderation on the Pakistani policies through its contacts in the Army. India should encourage the US to keep using that capability in the common interests of India, the US and Afghanistan. Greater vigilance on our border with Pakistan and on the internal security situation is necessary.