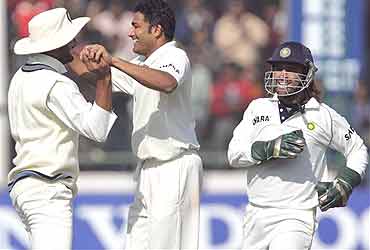 Anil Kumble produced another memorable display of spin bowling at the Feroze Shah Kotla as India snubbed a late fightback by Sri Lanka to record a thumping 188-run win and take an unassailable 1-0 lead in the three-Test series today.

Kumble broke a defiant partnership between vice-captain Mahela Jayawardene (67) and Tillekaratne Dilshan (32) to return with four for 85 as the the Lankans were dismissed for 247 about 45 minutes after lunch on the fifth and final day.

Jayawardene and Dilshan added 68 runs during the morning session and kept the Indians at bay before Kumble broke through Dilshan's defence to take India closer to victory.

Jayawardene played a defiant knock and waged a lone battle for three hours and 26 minutes before Harbhajan Singh had him caught at forward short leg.

The end came when Muttiah Muralitharan top edged a simple catch to wicketkeeper Mahendra Singh Dhoni off Harbhajan, sending the vociferous crowd into a frenzy.

The off-spinner returned with three for 70 while Kumble had match haul of 10 for 157. It pushed the leg-spinner's tally at the historic venue to 48 from five matches.

It was India's ninth Test victory over Sri Lanka and sixth on the trot at Kotla.

The two teams will now travel to Ahmedabad for the third and final Test beginning from December 18.

Resuming at 123 for five, Sri Lanka lost Jehan Mubarak for three in the seventh over of the morning with Ajit Agarkar beating the left hander with his swing to have him leg before wicket. But the dismissal apart, the Mumbai seamer failed to hit the right line and was punished by both Jayawardene and Dilshan who were not afraid to play their strokes.

Dilshan, demoted down the order, played an uppish drive off Agarkar that caressed the fingers of a leaping Mohammad Kaif at cover. But that was the only chance he gave in an otherwise energetic innings.

Kumble went wicketless in the first spell of the day when he bowled nine overs for 26 runs. Irfan Pathan tried bowling around the stumps but could not unsettle the Lankan batsmen.

Finally, the breakthrough came when Dilshan played all over a Kumble straighter one that kept low.

Jayawardene and Dilshan added 68 runs in a hour and 20 minutes before Kumble bowled the latter to end their resistance. Dilshan's knock of 32 came from 65 balls with six fours.

It was a commendable performance by the Indians and everything seemed to go right for the home team after Rahul Dravid won the toss and elected to bat.

Even the decision to promote Pathan as an opener in the second innings clicked as the gritty left hander played a vital role in the Indian victory with a flamboyant 93.