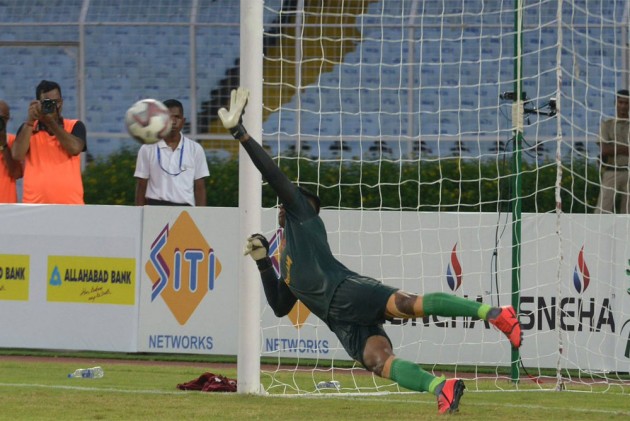 East Bengal's bid for a 17th title in their centenary year ended in a heartbreak with Gokulam Kerala producing a stunning 3-2 win on penalties to seal their place in the final of the 129th Durand Cup at Salt Lake Stadium, Kolkata on Wednesday.

East Bengal's former goalkeeper C K Ubaid, who joined the Kerala outfit this season after being snubbed, made the difference, pulling off two fantastic saves to hand them a 3-2 win in the penalty shootout after a 1-1 stalemate.

For Gokulam, Bruno Pelissari, Justin George and Lalromawia found the back of the net from the spot.

"I knew I would be in the bench so I called up (CEO) VC Praveen Sir who happily welcomed me saying 'Kerala wants you'," said Ubaid, rating this as his best show.

"When I came here, I was nothing. This club (EB) have given me everything. I will always have respect for East Bengal.

"We want to win this tournament for the people of Kerala and the diehard fans. We are all geared up," he added.

East Bengal drew first blood in the 18th minute with Samad Ali Mallick's world class 30-yard long ranger and maintained the slender lead till the second-half injury time where the match changed its course after referee Tejas Nagvenkar red-carded Mehtab Singh for a foul inside the box.

From the resultant penalty, tournament's top-scorer Marcus Joseph brought up his ninth goal to help his team equalise against East Bengal, who were down to 10-man.

East Bengal coach Aljendaro Menendez criticised the referee's decision saying it should not have been a red card.

"There are some doubts about the red card as per FIFA rules. He (Mehtab Singh) was not facing the goal (when he pulled down Henry Kisekka) In this type of cases, rule is not so clear to have a double sanction -- penalty and a redcard," the former Real Madrid youth coach said.

East Bengal defender Samad Ali Mallick struck an incredible long ranger from 30 yards that sailed into the Gokulam Kerala net to give the home favourites an 18th minute lead.

East Bengal, however, failed to swell their lead with Pintu Mahata being unlucky on few occasions, while an alert Malabarians goalkeeper C K Ubaid executed some fine saves under the bar.

Samad Ali too had to be substituted in the second-half after sustaining an injury.

Egged on by the red-and-gold supporters, the home outfit, however, failed to seal the issue inside the regulation time and received a big blow when they were reduced to 10 players in the 90+3rd minute after Mehtab Singh pulled down Kisekka inside the box.

With two minutes left for the final whistle, the Kerala outfit grabbed the opportunity to score the equaliser with Marcus converting from the spot.

Playing with 10 players in the extra-time, East Bengal managed to keep a clean slate with their goalkeeper K Mirshad executing three fine saves.

It was Kerala's Trinidadian forward who got all the three chances in front of the goal, but he failed to get past Mirshad.

In the 10th minute of extra time, Henry Kisekka's brilliantly placed shot found Joseph near the goalmouth but his header went straight to Mirshad's safe hands.

Then in the 17th minute, Joseph surged from the left flank and found himself in a one-on-one position with Mirshad but this time too the East Bengal goalkeeper stuck to his task, putting up a diving save.

Fighting cramps, Mirshad once again denied Joseph who cut past a defender but only to be blocked by the East Bengal custodian.

Earlier, East Bengal were denied by the woodwork inside three minutes with Pintu Mahata's shot hitting the cross-bar.

Mahata had another opportunity in the 36th minute when Jaime Colado set it up for him from the right flank as the former ran into the box but only to be thwarted by C K Ubaid.

In the 86th minute, the Malabarians had another chance but substitute Bruno Augusto Pelissari missed the target by a whisker.

But Kerala had the last laugh with Mehtab's game-changing foul in the dying minutes that virtually knocked out the home favourites' bid for a 17th title.