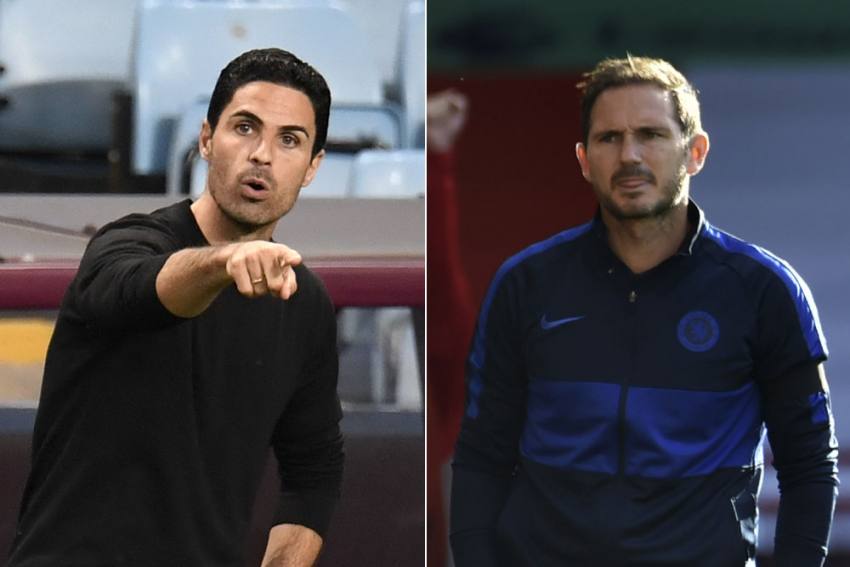 A look at what's happening around the Premier League on Saturday with the other major European competitions on a Christmas break:

The pick of the Boxing Day matches in England sees Arsenal in desperate need of a win.

When Mikel Arteta oversaw Arsenal's FA Cup final victory over Chelsea in August, it seemed like the Spaniard was laying down a marker for a brighter future for the north London club. Five months later, the two sides meet again at the Emirates Stadium with Arteta in turmoil.

Arsenal is languishing in 15th place in the Premier League, without a domestic victory since beating Manchester United on Nov. 1.

Arsenal is sweating on the fitness of captain Pierre-Emerick Aubameyang, who has a calf problem, while Thomas Partey is expected to miss out again with a thigh injury.

But fellow midfielder Granit Xhaka is back from suspension and Gabriel Martinelli is likely to be fit after limping off during a League Cup loss to Manchester City on Tuesday.

December started with Ole Gunnar Solskjaer's Manchester United job looking precarious again. Even though United has been eliminated from the Champions League, the team has won seven and drawn one of its last eight domestic matches, reaching the semifinals of the League Cup and moving up to third in the Premier League, five points behind Liverpool with a game in hand on the champions.

A point above the Red Devils is the team next awaiting them — Leicester — which rose to second by beating Tottenham last weekend.

Leicester striker Jamie Vardy will be fit after coming off with a minor groin problem at Tottenham.

Manchester City will be without striker Gabriel Jesus and defender Kyle Walker for the visit of Newcastle following positive tests for the coronavirus.

City, the 2018 and 2019 champion, is unusually low in eighth place in the Premier League, while Newcastle is five points behind in 12th.

The pressure is mounting on Newcastle manager Steve Bruce following a rocky patch on and off the pitch, including a League Cup loss at Brentford of the second division.

Bruce said he cannot put a timeframe on the returns of star man Allan Saint-Maximin and captain Jamaal Lascelles as both continue to suffer the after-effects of COVID-19. The illness has hit the key duo so hard they will not be available for the upcoming games against City, Liverpool and Leicester.

Fulham remains in the drop zone but has taken points off both Leicester and Liverpool to offer a blueprint of how the team might survive.

But Fulham's plans for the visit of Southampton have been complicated with manager Scott Parker self-isolating after a positive COVID-19 case within his household.

Seventh-place Southampton has several selection concerns ahead of the trip to Craven Cottage. Defensive midfielder Oriol Romeu is suspended, while striker Danny Ings and defender Jannik Vestergaard are trying to recover from injuries.

Chris Wilder's Sheffield United is bottom of the standings with only two points from 14 games, while Everton is in fourth.

Everton is set to be without playmaker James Rodriguez for a fifth successive match as he is struggling to fully recover from a calf injury. That leaves manager Carlo Ancelotti without three of his key players as midfielder Allan is also out with a hamstring problem.

The Italian had spoken earlier this month about having to rest forward Dominic Calvert-Lewin, who has started every Premier League match and played the majority of minutes in each.

Ross Barkley is expected to be available for Aston Villa's meeting with Crystal Palace. The midfielder has been out for a month with a hamstring problem but has returned to training while defender Ezri Konsa has also shaken off an illness.

Palace will be without former Villa defender Gary Cahill at Villa Park. The experienced center back has been ruled out due to a hamstring injury following last weekend's 7-0 loss to Liverpool.

This game epitomizes the change in fortunes of Villa and Palace. Villa was seven points adrift of safety when it hosted Palace in July with four games to go last season.

Now Villa is ninth, three points behind the top five with two games in hand. Palace is 13th.