The 'peace process' seems confined to the trashcans as both sides decide to exploit it for tactical advantage, even as they seek consolidation through hostilities on the ground. 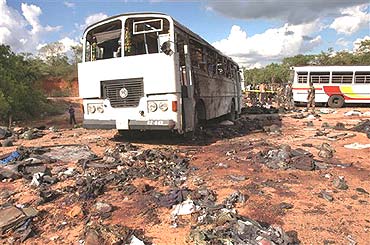 The six days between October 6 and 11 saw the highest number of deaths in fighting between government forces and the Liberation Tigers of Tamil Eelam (LTTE) since the two sides signed a ceasefire in February 2002. More than 400 combatants from both sides could have died in fighting in northern Jaffna and eastern Mankerni, if numbers quoted by the government and the Tigers are tallied.

[Add to this at least 103 naval personnel killed and over 150 injured today in one of the deadliest attacks in Sri Lanka, when LTTE rebels rammed a truck packed with explosives into their convoy of buses -- Ed, outlookindia.com]

Ironically, as fighting erupted first at Mankerni, early in the morning of October 6, Norwegian peace facilitators were winding up what appeared, till then, to be a successful mission to renew peace negotiations. After meeting separately with Jon Hanssen Bauer, the special Norwegian Peace Envoy, both sides agreed to talks in Geneva on October 28 and 29. But the announcement was quickly relegated to a footnote, when full frontal clashes erupted.

The rekindling of negotiations had done nothing to ease the tensions that had gripped the country since August 11, when the fighting had started in earnest. The Army confirmed that it had lost 129 soldiers in engagements along the northern forward defence lines at Muhamalai, south of Jaffna. The Tigers handed over 74 bodies through the International Committee of the Red Cross (ICRC) and said that there were another three dozen, highly decomposed, strewn in the area of battle. The government asserted that, though estimates of Tigers causalities could not be confirmed, radio intercepts suggested they could be as high as 200. LTTE sources, from its political headquarters in Kilinochchi, downplayed their death toll, claiming just 30 fatalities. More than 500 were believed injured in the fighting that erupted when government troops broke out from the defence lines in Muhamalai and attacked Tiger positions. The government claimed that troops had retaliated to continuous Tiger artillery and mortar fire, but the Tigers accused the Sri Lanka Army (SLA) of unprovoked forays into their areas. The Tigers had, in fact, issued a warning a day before fighting erupted that, if attacks continued, they would reconsider supporting the truce. "We asked him (the Norwegian ambassador to Colombo, Hans Brattskar), to convey to the government that one more attack and we will pull out," Tiger military spokesperson Rasiah Illanthariyan told this writer, soon after talks with Brattskar. The Tigers had issued the same warning in letters to the Norwegians and truce monitors. "The letter came on Saturday night (October 7) and the contents indicate the sentiments," SLMM Spokesperson Thofnnuir Omarsson stated. The Tigers alleged that the government was engaged in a buildup along the northern front. Despite the warnings, fighting erupted the day after Brattskar concluded his visit and, almost simultaneously, as Olso announced the dates for new talks.

On the other hand, right through the efforts spearheaded by Norway and supported by USA, Japan, the European Union and India for the resumption of talks, President Mahinda Rajapakse’s government had stood firm on its decision to retaliate if attacked by the Tigers. government forces under Army commander Lt. Gen. Sarath Fonseka, who survived a suicide attack in April 2006, had achieved some spectacular successes against the Tigers since August. They pushed the Tigers out of the strategic eastern coastal town of Sampur, overlooking the Trincomalee harbour. The LTTE was previously able to direct artillery fire across the Bay at defence establishments in the harbour and had attacked one troop transporter with 700 men on board when it was returning to Trincomalee from its bases around Sampur. Sampur had been under LTTE control since 1997.

Troops also gained control of the irrigation dam at Mawilaru, south of Sampur, when the Tigers blocked the sluice gates. They were also able to advance the forward defence lines in Jaffna, and the October 11, 2006, setback, when 129 soldiers were killed in a single day of fighting, was the first recent failure.

With movement and access in the areas of the fighting limited, claims of provocations and unwarranted attacks could not be independently verified. No one appears to be quite clear about who started the fighting in Mankerni, on October 6. The government said that Army camps along the line of control had come under mortar fire in the early hours of the morning, forcing troops to retaliate to smoother LTTE fire. The Tigers claimed that their areas were attacked without any provocation by government troops, who were guided by members of the breakaway Karuna-led Tamil Makkal Viduthalai Pulikal (TMVP). The TMVP, led by LTTE’s former eastern military leader, Vinyagamoorthi Muralitharan alias Karuna, told this writer that some 300 of their cadres were involved in the attack, but that they did not work with the security forces at any point of time. Pradeep Master, a high ranking TMVP military commander, stated that they had attacked Tiger camps north of Mankerni, at Panichchankerni, from their bases in Welikanda, from the north western side. The LTTE had started firing mortars at the Army camps to divert attention from the attack by the Karuna group, according to Pradeep. Other sources in the east claimed that the Karuna group had first moved along the A15 Highway, followed by government troops.

The fighting in east left more than 60 dead. The Tigers handed over 11 bodies to the Army through the ICRC, while accepting three among 11 that the Army had recovered. Both sides put the death toll of opponents at above 30. The Karuna group claimed that they had killed 43 Tigers and suffered eight fatalities and 11 injured.

This fighting is nothing new, given what has taken place over the past 10 months, since December 2005. More than 1,000 persons have died in the fighting, including over 400 civilians. Peace talks hit a snag in April 2003, and an earlier effort by the Norwegians to get them going proved futile earlier in this year. The violence has forced more than 200,000 Sri Lankans to flee their homes and another 15,000 to flee to southern India. Further, more than half a million in northern Jaffna have been living on a knife’s edge since mid-August, when the only overland supply route that runs through LTTE-held areas was closed. The ICRC has suspended its escorts to convoys because of the lack of security guarantees, and Jaffna has only been surviving on government-sponsored ships. Though the situation eased briefly towards late September, the latest fighting at the southern entrance to the Peninsula could once again disrupt supplies.

While the LTTE has repeated its threat to completely pull out of the talks unless the government stops attacks, the government appears to be sticking to its earlier position. Illanthariyan said that the Tigers would decide their future action after meeting Hanssen Bauer on October 19, even as the government declared that the violence was no barrier to the progress of talks. "The government categorically stated in the conditions to resume talks that the Security Forces retain the right to retaliate if the LTTE continues with their attacks," an official release stated. Evidently, both sides have decided to exploit the peace process for tactical advantage, even as they seek consolidation through hostilities on the ground. Under the circumstances, prospects of a return even to the unstable peace of the past four years appear to be rapidly receding.