Post-truth represents a situation when facts take the backseat and emotional appeals and personal beliefs start shaping public opinion. Post-truth politics (also called post-factual politics and post-reality politics) is defined as a political culture in which debate is framed largely by emotional appeals, and by the repeated assertion of talking points ignoring factual rebuttals. Post-truth differs from the traditional contesting and falsifying of truth by relegating truth to be a concern of secondary importance. In 2016, ‘post-truth’ was chosen as the Oxford Dictionaries’ Word of the Year subject to the Brexit referendum and the U.S. presidential election.

In 2015, media and politics scholar Jayson Harsin coined the term ‘regime of post-truth’ covering many aspects of post-truth politics. He argues that a convergent set of developments have created the conditions of post-truth society: the political communication informed by cognitive science, which aims at managing perceptions and beliefs of segmented populations through techniques like micro-targeting which includes rumours and falsehoods; the fragmentation of modern and more centralised media; the attention economy marked by information overload, user-generated content and fewer trusted authorities to distinguish between truth and lies; the algorithms which govern what appears in social media and search engine rankings, based on what users want and not on what is factual; and news media which have been marred by plagiarism, hoaxes, propaganda and changing news values.

With regards to fake and false news, there is a conceptual error here. When we cite fake news, it is presumed that there is an original piece of news which is being faked. However, it is largely about false news, news that does not exist or perhaps exist in a totally different form.

The digital culture allows anybody with a computer and access to the internet to post their opinions online which may become legitimised through echo-chambers. Content may be judged based on how many views a post gets, creating an atmosphere based on click bait that appeals to emotion. Content, false or post-truths, which gets more views is continually filtered around different internet circles, regardless of its legitimacy. The internet allows people to choose where they get their information, allowing them to reinforce their own opinions.

In the Modi-Shah-Adityanath era of post-truth politics in India, cattle traders are lynched, every Hindu-Muslim marriage is love jihad, becoming a Hindu is ghar wapsi, anyone questioning the efficacy of an army act is considered an anti-national, slogans of freedom from poverty are considered to be secession calls and the likes, Priyanka Chopra meeting Rohingyas as a humanitarian cause is vilified and she shown in burqa, Sushma Swaraj taking a perfectly right step on the issue of an inter-faith couple's passport issue is viciously attacked online.

Globally, in the Western world, rumour cascades are usually investigated through six independent fact-checking organisations (snopes.com, politifact.com, factcheck.org, truthorfiction.com, hoax-slayer.com, and urbanlegends.about.com) by parsing the title, body, and verdict (true, false, or mixed) of each rumour and investigations are reported on their websites.

Both technology companies and governments have started to make efforts to tackle the challenge of ‘post-truth politics’. In an article for the journal Global Policy, Prof. Nayef Al-Rodhan suggested four particular responses:

2. Greater involvement and visibility for scientists and the scientific community.

3. Stronger government action. The most important challenge here is to ensure that such state-led efforts are not used as a tool for censorship.

India, one of the biggest internet markets in the world, has its share of troubles with fake news, but Indian society has also given birth to important initiatives to tackle the issue. For instance, a news portal called The Quint has started a section called Webquf that debunks fake news. Some of the leading grassroots citizens-driven anti false-news initiatives as of today are: (1) Boom FactCheck (BFC), established by Govindraj Ethiraj; (2) Social Media Hoax Slayer (SMHS), started and run by Pankaj Jain; (3) Pratik Sinha’s Altnews.com and (4) check4spam.com initiated by Shammas Oliyath and Bal Krishn Birla.

As news of two Indian soldiers allegedly beheaded by Pakistan broke, several thousand WhatsApp groups came alive. A video purportedly showing the beheading, one by a chainsaw and another knifed in the throat while singing Vande Mataram, went viral. A week later, it turned out that the video was shot in 2011 and the men were Spanish drug dealers. It was exposed by Mumbai-based businessman Pankaj Jain who runs the SM Hoax Slayer. 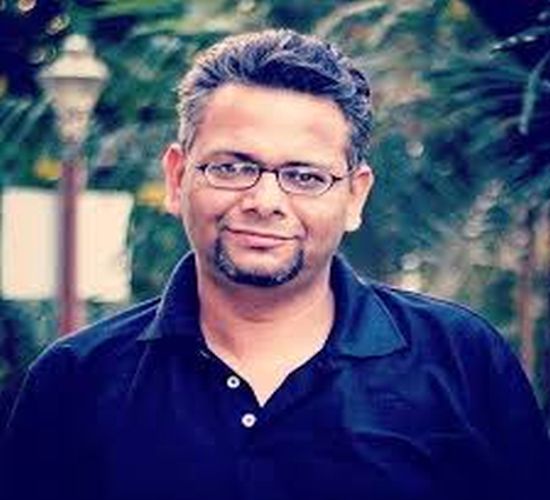 In 2015, for instance, the police said WhatsApp messages had led to a man being lynched in Ahmedabad, Gujarat, and four beatings in nearby Gandhinagar. Mohammad Akhlaq was murdered by a mob in his house in Uttar Pradesh the same year after villagers said they had seen pictures on WhatsApp proving he had slaughtered a cow. Such visuals could never be proven, though. WhatsApp messages have led to the lynching of more than 30 Indians in the last three months across India, largely on rumours of child-lifting, found untrue in all cases.

But how do these hoax-slayers dig out the lies? While software tools are used to trace videos on YouTube, key words are reverse googled to find the original context. Pratik Sinha of Altnews.com explains, “Sometimes, I break a video into frames and then search for the original. It can take an hour or a whole day."

Data scientist Rishabh Srivastava says fake news in India is of deeper concern since it is primarily spread through WhatsApp. Data analytics can show us the ethnicity and gender profile of those forwarding a certain piece of news that help us determine whether it is false or not but the nature of WhatsApp encryption makes it difficult to counter it, he adds.

One of the most common techniques of the fake news industry is to take images out of context. Fake news with stolen and doctored images is found worldwide and could even lead to real social strife. In India, some of the most out-of-the-blue cases of images taken out of their original context include a story claiming that an old Hindu temple carried images of modern technology – such as an astronaut — or that researchers unearthed the 80-foot-long skeleton of Ghatotkacha, a giant described in the Mahabharata epic.

Pratik Sinha reveals that he does the same with videos by breaking them into frames and then putting these stills in the reverse image search. As revealed on SMHS, the image of the astronaut on the ‘temple’ turned out to originate from the New Cathedral in Salamanca. The astronaut and other modern touches were added to that church during the 1992 restoration. The skeleton of a ‘giant’ was in reality a sculpture by an Italian artist. 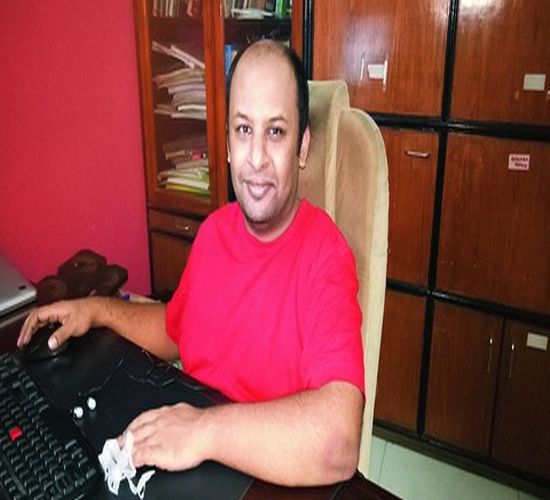 Reverse image searching also helps to counter the doctors of doctored images. Photographs are not just being stolen – they are also being morphed or altered. A clever combination of two historical photographs created the image of the members of Rashtriya Swayamsevak Sangh, a Hindu nationalist organisation, saluting before the British queen.

The hoax slayers also refer to verified accounts on social media such as Twitter or Facebook. This method may have its limitations: many times, well-known people such as politicians or journalists share fake news and doctored images accidentally. Yet, looking at the social media user profiles, while not necessarily helpful in judging the credibility of the news, helps in uncovering the agenda behind the news.

Going beyond the web by contacting official institutions to verify a story also helped in a number of cases. For example, Ethiraj and Jacob of Boom FactCheck recommend contacting local police when the news clearly relates to a smaller locality. Boom FactCheck did exactly that in assessing the validity of a story about a violent abduction in the state of Rajasthan. The importance of verifying a story with the authorities was recently confirmed when a school bus was attacked by goons in the city of Gurugram. While it was widely believed that the attackers came from a fringe, right-wing Hindu group called the Shri Rajput Karni Sena, many netizens shared the news that the men that pelting stones at the school bus were Muslims. The Gurugram police, however, denied that any followers of Islam were arrested in connection to the event.

As dystopian as it may seem, the fake news problem in India is very real. In all, seven people lost their lives in two separate incidents in Jharkhand, in a fury that was based on falsified social media information. A couple of months after the Jharkhand incident, amidst a communal flare-up in the state of West Bengal, a BJP leader, Vijeta Malik, shared a screenshot from a local feature film and passed it off as an incident of a Hindu woman being molested by Muslims.

Multiple videos were circulated on WhatsApp allegedly showing Indian Muslims celebrating the victory of Pakistan. All except one of those videos was genuine; it was from Indian-administered Kashmir, as one of the exposes finds.

The only driving force in fake news is the existing, strongly-held bias among people. What this means is that, a lot of the time, social and mainstream media feed off one another to get more eyeballs. However, the larger issue is still one of media literacy and the fight against fake news still needs to be led by mainstream legacy media. People segment organisations into those they trust and those that they believe are there to entertain them. There is a higher onus on those that they trust to do more. This could be as simple as breaking down an article and educating readers how they work. It can be as basic as distinguishing an opinion piece from a news piece and breaking down articles and identifying things like sources, facts and analyses.

Finally, it is the protracted efforts of the civil society, assisted by a movement for media literacy through academia and alternative media that can to an extent combat the menace of false, fake, post-truth news and trolling. 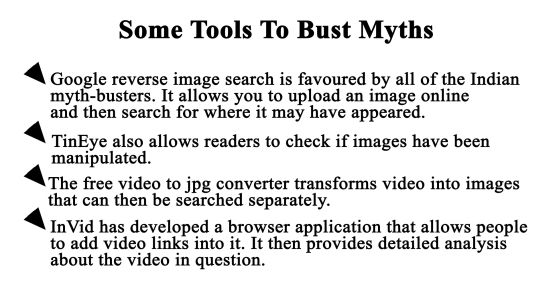 ¡  Fight against misinformation by providing them with in-depth and hands-on verification training. The training will be imparted to 8,000 journalists across English and six other Indian languages over the coming year

¡  Select 200 journalists from cities across India, who will hone their skills in verification and training during five-day “train-the-trainer” boot camps.

¡  They will be trained in person by global verification experts and top Indian fact-checkers, including First Draft, Storyful, AltNews, BoomLive, Factchecker.in, and DataLeads

¡  The network of certified trainers will train more journalists in and around their region at two-day, one-day and half-day workshops organised by the network.

(The author is the school head, School of Media, Pearl Academy, of Delhi and Mumbai. He was earlier the Dean of Media in Symbiosis and Amity Universities, and Whistling Woods. He has been a research fellow with the Ford Foundation, in Mumbai University. Views expressed here are his own.)