Rahul Gandhi being shoved around by UP police personnel at the Yamuna Expressway, on Thursday, was arguably the most politically potent image of the Congress leader yet. 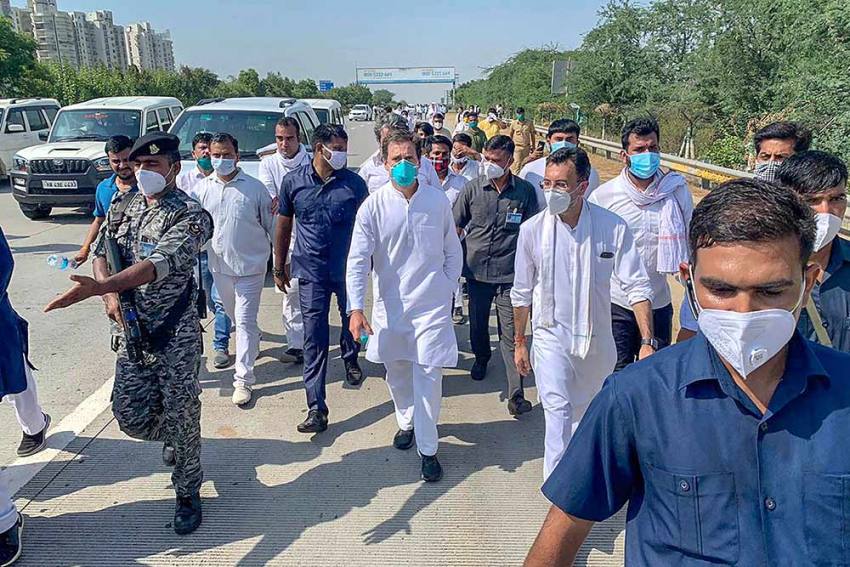 Former Congress President Rahul Gandhi with party leaders marches along the Yamuna Expressway to meet the family of the 19-year-old Dalit rape victim in Hathras, after their vehicles were stopped by the authorities, in Noida.
PTI Photo/Ravi Choudhary
Puneet Nicholas Yadav 2020-10-01T21:51:47+05:30 Can Rahul Gandhi Seize The Hathras Moment For Reviving The Congress? 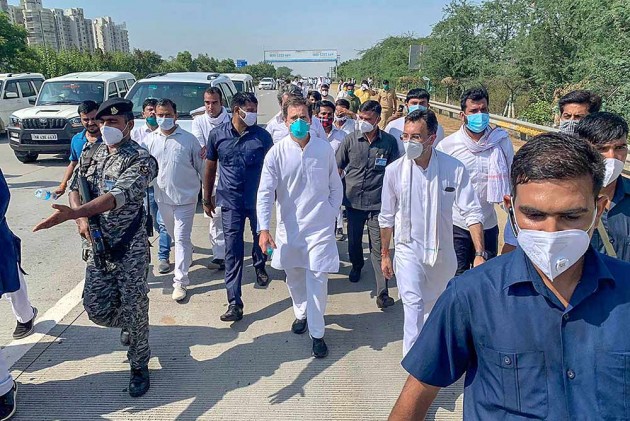 It’s that question again. Is it Rahul Gandhi’s ‘Belchi’ moment? Has the ‘tried and failed’ former Congress president finally found the issue that can re-launch him as the BJP’s nemesis and pull his crisis-ridden party out of morass?

Rahul Gandhi being shoved around by UP police personnel at the Yamuna Expressway, on Thursday, was arguably the most politically potent image of the Congress leader yet. With his sister Priyanka Gandhi Vadra and a large posse of supporters in tow, Rahul was trying to reach Hathras to meet the family of a 19-year-old Dalit girl who was allegedly gang-raped by upper caste men and later succumbed to the barbaric injuries inflicted on her.

Predictable accusations of the Gandhi siblings politicizing the horrific Hathras incident have come from the BJP. The might of the Uttar Pradesh government was, undoubtedly, on display as the police and district administration sprung into action to stop Rahul and Priyanka from reaching Hathras – the duo couldn’t even cross Greater Noida. The accolades from critics of the BJP and sundry Twitter-happy folk came pouring in too – many hailing Rahul as the only Opposition leader who has consistently shown the courage to raise the right issues, others praising his audacity against a formidable political rival and imploring him to not give up the good fight.

Over the past six years, any defiant act by Rahul against the BJP regime, at the Centre or in states ruled by the saffron party, immediately brings back the ‘Belchi’ analogy. In August 1977, five months after she and her party had been thrown out of power in the post-Emergency general elections, Indira Gandhi had decided to visit Belchi, a small hamlet in Bihar’s Patna district. Though there was no 24X7 media circus back then, the visit had changed the course of Indian politics and also Indira’s political fortunes at a time when the horrors of the Emergency and the result of the Lok Sabha polls had many writing obituaries of the Congress’s electoral domination. Trudging through sludge atop an elephant, Rahul’s grandmother had made the four-hour journey to reach Belchi where eight Dalits and three others from deprived communities had been killed a few weeks earlier by upper caste landlords. Indira met the families of the victims of caste violence and, in the weeks and months that followed, capitalized on the publicity that her arduous trek generated to project herself as saviour of the oppressed.

India’s political landscape has changed much since then and the days of Congress’s electoral domination are now a distant memory. The Belchi imagery, however, has survived and remains, even 43 years later, a symbol of the Gandhi family’s appetite for political combativeness and fortitude.

However, Rahul’s uninspiring career graph; replete with instances of gaffes, electoral failures and the perception of him being a non-serious, transient politician, has often led to the impression that he lacks the credentials for laborious political combat. The recent upheaval within his party following demands by 23 senior leaders for a leadership overhaul too can be seen as an extension of this taint against Rahul. It is true that no political leader in recent decades has, perhaps, been as ridiculed by his peers and rivals alike as Rahul has been. That he still manages to trudge along is often dismissed as a ‘lust for power’ and rarely applauded as a mark of a leader.

Can Rahul’s Hathras outing, interrupted as it was due to the scuffle with UP police, change the course of his politics and that of his party? What perhaps differentiates Rahul from Indira is that the latter never slipped into inaction after her Belchi sojourn. Rahul, on the other hand, has had a few moments of his own which have variously been touted as his Belchi encounter. The most recalled one is of his rebellious ride to Bhatta Parsaul villages – again in Greater Noida – in July 2011 to show solidarity with farmers after four people from the villages were killed in police firing while protesting against forcible land acquisition by the then Mayawati-led UP government. Rahul promised to always fight for the rights of the farmers and for a while, he did. The Land Acquisition Act passed during the UPA regime in 2013 was largely attributed to Rahul’s push. However, two years later, when farmers in the villages and his own party workers were protesting against the Narendra Modi government’s attempts at diluting the Land Acquisition Act, Rahul  failed to turn up for a padyatra to show solidarity with a cause he had himself championed.

Rahul’s interventions for rights of the Kondh tribals in Odisha’s Niyamgiri hills (in 2010) or the people of drought-prone and economically backward Bundelkhand (2008), too met a similar end. He simply never bothered to follow up on his promises – or even if he did, no one really got to know about it. Some months ago too, Rahul took up the cause of migrant workers who had been forced to walk hundreds of kilometers back home from their places of work due to the coronavirus-induced lockdown and its economic cost. The issue was then left for his party to raise occasionally at press conferences. He skipped the recent Parliament session in which three controversial agriculture legislations were passed following clearly ‘unparliamentary’ means. Rahul’s absence from Parliament was because he was accompanying his ailing mother, Sonia Gandhi, for her medical check-up in the USA and that is certainly laudable in a son but Rahul is also a politician – and often an absentee one at that.

The Hathras incident has given Rahul another chance to redeem himself as a leader who raises the right issues and takes them to their logical conclusion – or at least keeps up the fight. Of course, there are clear political and electoral considerations that must have shaped up his intervention. His party is desperately seeking revival in UP under Priyanka’s charge and the Dalits constitute a sizeable vote. Bihar, where elections are due later this month, too has an electorally significant Dalit votebank and reverberations of the Hathras horror are bound to be felt in the eastern state too. The Congress is a fringe player in Bihar too but Rahul’s public solidarity with the Dalits in Hathras may allow his party to capitalize the incident to some extent, particularly since he and his Congress colleagues were the first ones to take to the streets in protest while Dalit parties like Mayawati’s BSP, Ram Vilas Paswan’s LJP and others continued to pay lip service.

To pounce on a day’s event and claim that Rahul has finally arrived as a leader to reckon with on an increasingly saffron political firmament may be have its lure for those who desperately seek the BJP’s ouster. However, whether this really was Rahul’s Belchi moment will be determined by his own perseverance. If he gives in to Wednesday’s discomfort – or decides to bask in the publicity over his scuffle and eventual arrest – Rahul will only prove his critics right once again. He needs to return to Hathras; no matter how many attempts it may take or how bruised he may get while trying.