Shafath is the father of Asghar Ali Khan, the man who shot tigress Avni in Maharashtra's Yavatmal district last week. 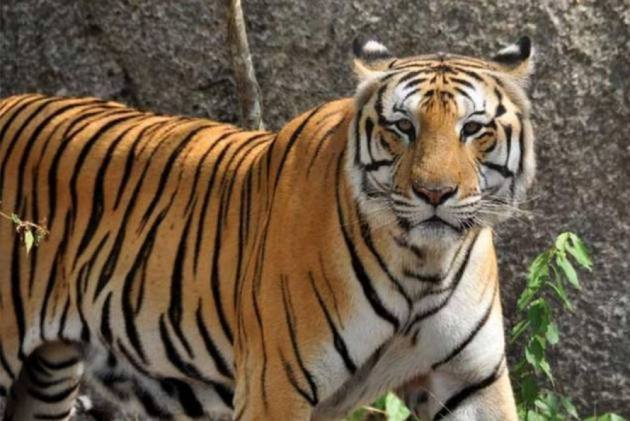 In five years, India will have so many tigers that people will poison them and the "terror" caused by these animals is going to be such that no government can control it, warns celebrity hunter Nawab Shafath Ali Khan.

Shafath is the father of Asghar Ali Khan, the man who shot tigress Avni in Maharashtra's Yavatmal district last week.

Shafath believes human-animal conflict will spiral out of control unless the government takes steps to maintain the land-to-animal ratio, fence all national parks and ensure availability of food and water for animals in forests so that they don't venture into human habitations.

Shafath  and his son are under attack from animal lovers after Avni's killing. Referring to the last week's incident in Uttar Pradesh in which a tiger was crushed to death by villagers after it killed a man, he warned that this would happen at more places around the country.

"Till 1972, the number of animals was under control because killing of animals entering fields was allowed. Today the law provides full protection to animals, and as a result, their numbers are increasing," said Khan, who is wildlife adviser to nine states.

"In 1980, there were 15,700 elephants and today their number is 30,000. They are venturing into human habitations and creating havoc. Nilgais are causing terror in Gujarat, Bihar and other states. Thousands of nilgai are destroying fields," Khan told IANS in an interview.

With the population of tigers also going up to 3,000, Khan underlined the need to make base prey and water available to big cats in their natural habitat. Each tiger needs a kill every week. He believes lack of proper maintenance of forests have turned 5.5 crore people living in 1.87 lakh villages adjoining the forests into enemies of animals.

"Last year, 18 tigers were killed due to poisoning and electric fencing in Maharashtra alone. Nobody talks about it. Here when one man-eater tiger is killed they are raising all sorts of questions," said Shafath.

Last year, they captured alive a tigress near Tadoba National Park in Maharashtra after it had killed two people.

On the allegation by animal lovers that he is trigger-happy, Shafath says that not even once in his life had he requested any state government to call him. "I have received 50 orders from governments since I was 19. They called me because of my work, experience and expertise which they lack," he said showing the latest order issued by Maharashtra government, seeking his services to capture Avni alive or to kill it.

Rubbishing all charges made by animal rights activists, including Union Minister for Women and Child Development Maneka Gandhi, he said he never took money for the operations.

Shafath claims he dedicated his life for those poor for whom there is no one take care of. The happiness which he sees in poor farmers, tribals, widows and orphans on successful completion of operations inspire him to work.

"I don't need awards, media publicity or money," said Shafath, whose grandfather was adviser to the British colonial rulers in the 1930s and whose father was also a renowned hunter. "Show me the pugmark of a tiger, I will tell you if it is male or female, old or young, healthy or ill. That's our expertise and that's why we are called," said the man from an erstwhile royal family.

He said it was the government's responsibility to ensure that animals don't cross the borders of forest . He pointed out that tigress Avni covered a distance of 60 km to reach human habitations and killed 13 people in two years.

"If such a thing happens in US, the officer concerned will be tried for manslaughter. The life of a human being is more important, there but here a man-eater tiger has become more important," he said.

Khan alleged that activists have a hidden agenda and get foreign funds. "They have nothing to do with wildlife and the man-animal conflict," he said and demanded a probe by the Central Bureau of Investigation (CBI) into the funding of such individuals.