India On The Mat Despite Fightback

After conceding a 228-run first innings lead, the Indians hit back to reduce Australia to 127 for four in their second essay but the visitors tighten the noose with a massive overall lead of 355. 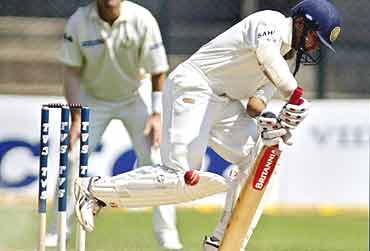 India tried to stage a fightback but still faced an uphill task to save the first Test as Australia tightened the noose around the hosts with a massive overall lead of 355 runs today.

After conceding a 228-run first innings lead, India hit back to reduce Australia to 127 for four in their second innings but with the middle order defending stoutly, the world champions remained in the driver's seat.

Damien Martyn was unbeaten on 29 with first innings centurion Michael Clarke on 11 at stumps after the visitors decided not to enforce the follow on despite India falling 28 runs short of the mark.

India's defiance after a top-order slump was personified by the tailenders who resisted the Australian attack for close to four hours, forcing skipper Adam Gilchrist to decide against enforcing the follow-on.

Indian bowlers then did well to get regular breakthroughs and not allow a big partnership to build up.

With two full days play left, and the pitch holding out better than expected, the Australians can look to add some more runs to pile on the misery.

Parthiv Patel (46) and Irfan Pathan featured in a 60-run partnership for the seventh wicket before India were bowled out for 246 with 20 minutes to go for tea in reply to Australia's first innings score of 474. Resuming at 150 for six, India added only 49 runs in the opening two hours but it was a frustrating session for the Aussies.

The visitors had a lucky break when Pathan, after making a disciplined 31 from 96 balls, was ruled caught behind by Billy Bowden moments before the break.

Television replays, however, showed a huge gap between bat and pad as Pathan stretched forward to defend against Shane Warne's leg break.

The Aussies had to withstand another partnership between Patel and Anil Kumble before the second new ball did the trick.

Patel showed gumption in handling the Aussie quicks who got little help from the slow pitch, and played Warne with a broad bat.

His 46 came off 125 balls and contained five fours. His innings came to an end when Jason Gillespie made the new ball skid through and take the inside edge off his angled bat before hitting the stumps.

Glenn McGrath foxed Harbhajan Singh with a slower one before Gillespie uprooted Kumble's off stump.

Australia lost Justin Langer in the very first over to Pathan but still maintained a brisk scoring rate. Matthew Hayden (30) and Simon Katich (39) pushed the total to 65 in 16 overs. Hayden once again fell after being in good touch, having struck four boundaries in his 53 ball knock before he was run out.

But Katich, who in the first innings had handled the spinners comfortably, was guilty of a casual shot.

After an attacking innings in which he hit five fours, Katich tried to hit Kumble across and popped a simple catch to Rahul Dravid in the first slip.

Darren Lehmann (18) seemed to feel the pressure to hold his place after Clarke's magnificent performance as he fell cheaply for the second time.

Damien Martyn then turned out to be the key for the tourists as they set about to post a huge target for the Indians.

Martyn was impressive in his varying tactics to counter the 'Turbanator' and 'Jumbo'. He batted with an off-stump guard to counter Harbhajan's vicious off-spinners but was less worried to come out in front against Kumble.

He repeatedly cut Kumble behind point while managing to keep himself out of danger of becoming a bat-pad catch victim, as had been the case in the first innings.

Harbhajan bowled better than he did on the second day when he had adopted a negative line and length. Today, he not only spun from outside the off, but also extracted considerable bounce to push the batsmen on the back foot.

Whereas he attacked the left-handers' leg yesterday, today he was willing to come round the stumps even to the right handers in order to give himself a better chance of a leg before decision.

Pathan was the other bowler who troubled the batsmen with his accurate arcs from middle and off to outside off.

Unfortunately, the other two specialist bowlers failed to rise to the occasion. Both Kumble and Zaheer Khan were guilty of bowling more loose deliveries than wicket-taking ones.

Kumble was clearly struggling at one stage, so much so that after claiming Katich, he bowled a rank full toss for Lehman to open his account with a boundary.

Zaheer, although he beat the bat regularly, released the pressure by straying down the leg side.