The 81-year-old activist was admitted to Nanavati hospital on November 18. 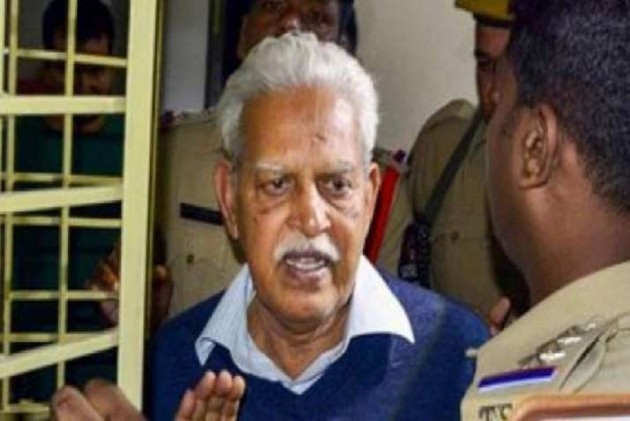 The Bombay High Court on Thursday said the condition of poet-activist Varavara Rao, arrested in the Elgar Parishad-Maoist links case, had improved but he will continue to remain at a private hospital till December 14.

A division bench of Justices SS Shinde and MS Karnik perused a medical report submitted by the Nanavati hospital here where Rao was admitted on November 18.

"There is some slight improvement. He shall continue to remain admitted there till December 14," the court said.

The HC will hear the petition filed by Rao seeking bail on medical grounds and another filed by his wife Hemalata seeking that he be shifted to Nanavati hospital from jail for medical treatment on December 14.

On November 18, the High Court had noted that Rao was 81 years old, suffered from neurological ailments and also needed post-Covid-19 care after recovering from the viral infection.

A person was on death bed and in such circumstances, the state government cannot say that he should be treated in the jail, the Court had said.

Following the court's observations, the Maharashtra government had on November 18 agreed to shift Rao from Taloja prison in Navi Mumbai to the Nanavati hospital and also to bear the expenses of his treatment.

The HC on Thursday said that the lawyers of the petitioners as well as the National Investigation Agency (NIA) -- which is probing the case -- shall go through the medical report, and posted the matter for further hearing on December 14.

Rao had been in and out of the state-run JJ hospital in the city and the Taloja prison hospital since his arrest in June 2018.

On July 16 this year, he tested positive for coronavirus and was shifted to the Nanavati hospital. He was discharged on July 30 and sent back to the prison.

His and his wife's petitions claimed that he was suffering from several ailments.

Rao and a few other left-leaning activists were arrested for alleged links with Naxals following the Elgar Parishad conclave in Pune on December 31, 2017.