Odisha's Chief Secretary Asit Tripathy explains that when disaster strikes, there's a single line of command in the state government, and hence, no confusion. 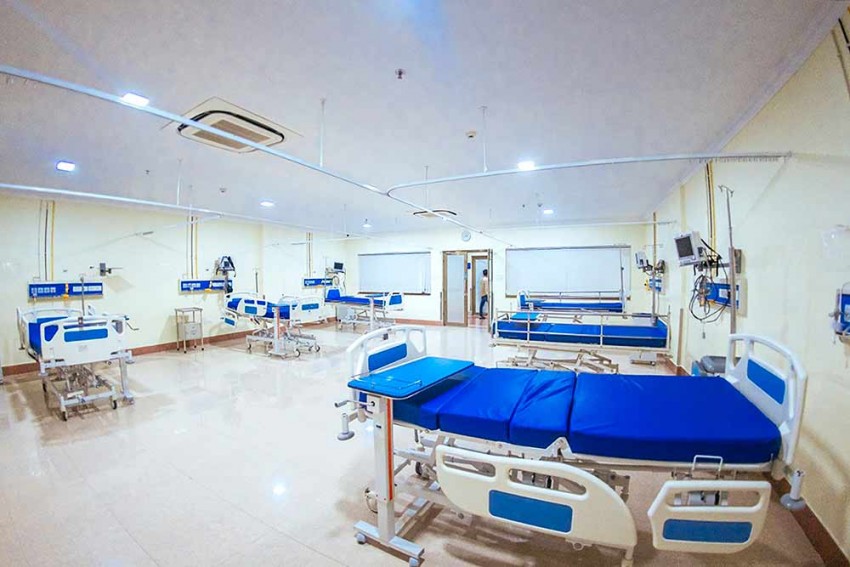 Odisha Government has set up Odisha Govt sets up two COVID-19 dedicated hospitals with a capacity of 650 beds including 500 bedded facility near KIMS in Bhubaneswar and 150 bedded facility at Ashwini hospital in Cuttack. Both were completed in a record time of one week.
PTI Photo
Sandeep Sahu 2020-04-04T11:43:09+05:30 'Preparing For The Worst': Odisha’s Chief Secretary Explains Strategy Against COVID-19 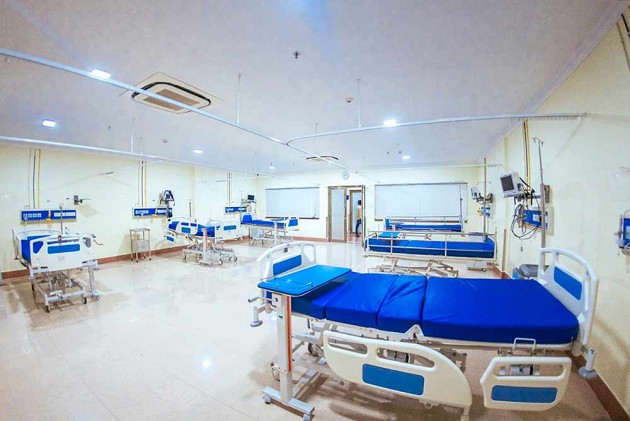 Odisha has been a role model in disaster preparedness for other calamity-prone states. And true to its record of staying ahead of others, it got off the blocks and got going before most other states had even fully grasped the enormity of the biggest disaster mankind has faced in the last several centuries: the deadly novel coronavirus, also known as COVID-19.

Odisha has been acknowledged as a pioneer in disaster preparedness. Have the systems put in place since the Super Cyclone helped in preparing for the coronavirus pandemic better?

The answer is an emphatic ‘Yes’. The way we approach a disaster is extremely professional. We have a decision-making process that is extremely streamlined. As a result, there is no confusion in the agencies that implement the decision. Once a decision is taken here, it is immediately passed on to the Collectors, who implement the decision in the districts.

Fortunately, our social organisations, like Panchayati Raj Institutions (PRIs) and Mission Shakti bodies are very strong. Hence, the implementation of the decisions taken is instantaneous. During Cyclone ‘Fani’, for example, we decided to evacuate everyone on the route that the cyclonic storm was expected to take after landfall, numbering about 1.3 million. And we actually managed to evacuate 1.2 to 1.3 million in just 24 hours before the cyclone – of course, after planning for it over the preceding 48 hours. The strength of our governance is: there is absolutely no confusion at any level once a disaster strikes. There is a single line of command.

Secondly, we have a very efficient and capable team of officers who can do the job. For example, there is a procurement committee, currently headed by the Industry secretary, which liaises with the suppliers and agencies to ensure that we get adequate supplies of testing kits, masks and PPEs (Personal Protective Equipment) in time. Then there is a committee for essential commodities, headed by the Water Resources secretary, which coordinates and oversees onion supplies from Nasik, oil loading in Kakinada, dal supplies from Nagpur and potato procurement from West Bengal. These officers handle different responsibilities in normal times. But now all of them are working 24X7 for COVID-19 management.

Thirdly, we use a lot of technology. To the best of my knowledge, we were the first state to make registration mandatory for all those who had come or wanted to come here from foreign countries as early as March 4 through a toll-free number and a dedicated portal. We also ramped up the existing health department call centre (104) to a dedicated inbound call centre for all COVID related queries and converted the Mo Sarkar call centre into an outbound call centre. Whenever the person manning this centre feels that someone needs medical attention urgently, the calls are diverted to the Smart City call centre at Bhawani Mall where doctors work in shifts round the clock to provide medical advice and counseling. Similarly, there a dedicated call centre at the Home department which is keeping track of people from Odisha, who got stranded after the announcement of the 21-day lockdown by the Central government. It is currently handling about four lakh such people.

To what extent did the fact that the Odisha government got off the blocks early help in keeping the number of cases down? Are the numbers low because not enough people have been tested, as some are claiming?

This is one calamity no one has any previous experience of. In such a situation, all that one can do is to plan in advance. One of the things we have been doing is to closely monitor the spread of the virus across the world since its origin in China. That has helped us to procure medicines for at least nine months. But we do have a shortage of test kits and personal protection equipment (PPE) for which the Hindustan Latex Limited (HLL) is the company mandated by the Government of India for supply of these two items to all state governments. However, because of the prior planning, we have been able open up a few Track II supply sources outside it, but it hasn’t been enough. Besides, we also put in place the statutory provisions under the Indian Epidemic Act required for this extraordinary situation. As you know, we were the first state to enforce a statewide lockdown, even before the central government imposed it. Together, these measures have certainly helped.

The state government has signed MoUs with three private hospitals to set up three COVID-19 facilities at short notice with a combined bed strength of 1,100 to deal exclusively with corona cases. Why could not the same facilities be created in government health institutions like the SCB Medical College in Cuttack, the MKCG Medical College in Berhampur and VIMSAR in Burla? Why was the private sector preferred?

As I told you, we have been tracking the developments and trends on Corona since the beginning. And we didn’t want to repeat the mistake that Italy committed by mixing up Corona patients with other patients in government health facilities. Hence, we knew at least a month ago that we would need hospitals to deal exclusively with Covid cases.

How does the government plan to use these facilities created for COVID-19 after the crisis is over and things get back to normal?

It’s a rental model. Our arrangement with the private hospitals would come to end after three to six months. It is difficult to say at this stage exactly when because it’s an evolving situation and we don’t really know how it is going to pan out in the days ahead. So, disassociation will not be a problem. In government hospitals in the districts, the facilities being created now would have improved the infrastructure immensely, which would benefit the state at large. Only in the private hospitals funded by private companies, the gains would go to the private entities.

Now that Odisha appears to be entering the crucial and most difficult phase of community transmission with as many as 15 new positive cases in a single day on Friday, do you see the situation deteriorating fast and even going out of hand in the coming few days?

We are preparing for several scenarios. We can only speculate about what is in store for the future at this stage. We have the example of the US, the most advanced nation in the world. And yet, the condition they are landing in some of the states there is really bad. I have no hesitation saying we are preparing for the worst.

Has the participation of many people from Odisha in the Tablighi Jamaat event in Nizamuddin derailed the state government’s preparation to an extent? Already, the case of the one person in Cuttack who has tested positive has been traced back to the event, hasn’t it?

I can tell you that it has derailed the whole Indian preparation. You have asked a very important question. We have already identified 27 people from the state who attended the event. But I have reasons to believe there are more. We have to track them down quickly, test them and also identify those who have come in contact with them and put them in quarantine. To help trace them quickly, we have now roped in the police and designated the IG, crime Branch as the state coordinator for contact tracing, a job which was being done by health and municipal officials earlier. Like other states, we are also concerned about the trail of those who attended the TJ event. But we are doing all we can to track them down and put them on quarantine in the quickest possible time. Fortunately for us, many of them have stayed back in Delhi or are in other states. Most of them have already completed their quarantine period successfully. That certainly is a matter of relief. But we are not lowering our guard yet.

How easy or difficult it has been to track them down and put them in quarantine in view of reports coming in from several states about doctors, health officials and police being pelted stones and attacked?

Mercifully, no such thing has happened in our state. But we should not bring in religion here. It’s a general problem. Due to misplaced fear fuelled by lack of awareness, many people dodge, resist or thwart efforts to put them in government quarantine facilities or isolation facilities, if they test positive. And this resistance is irrespective of caste, class or religion.

What are the chances of the 48-hour shutdown in Bhubaneswar, Cuttack and Bhadrak from 8 PM announced on Friday getting extended to the whole state in the coming days as was the case in the lockdown?

Honestly, I don’t really have a ready answer. As I have said before, it’s a constantly evolving situation. Like you and everyone else, I am also waiting every day for the results to come. The shutdown has been clamped in the three cities identified as hotspots. If other hotspots emerge in the days ahead, we will obviously have a containment strategy in place which may or may not require a complete shutdown as in the case of these three places. As it is, we have a lockdown in place. But there are far too many exceptions in that. That’s why a total shutdown is necessary in some cases as part of a containment strategy. But it goes without saying such shutdowns can only be a brief period and cannot be extended indefinitely.

'I Hang My Head In Shame': Poet Rahat Indori On Attack On Health Workers In Indore