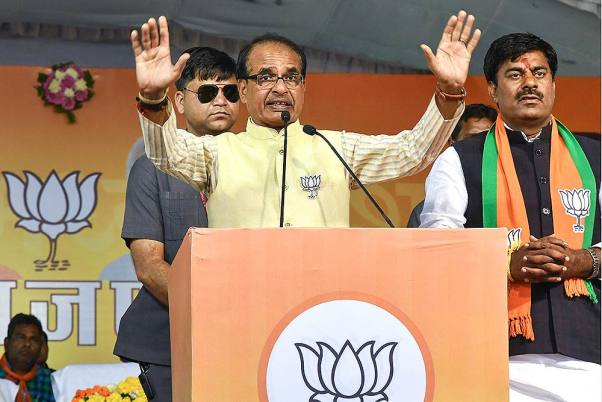 Madhya Pradesh Chief Minister Shivraj Singh Chouhan on Thursday said his government will provide 200 days of work under MNREGA, instead of the present 100 days, in the Left-wing extremism-affected Balaghat district of the state to ensure its development.

Road connectivity and mobile phone network in the areas will also be improved, he said.

Chouhan made the announcement in Maharashtra's Gondia district, where he reviewed the arrangements in the Naxal-affected areas with the collector and superintendent of police of MP's Balaghat district.

He was in Gondia to attend the funeral of his father-in-law Ghanshyam Das Masani (88), who died of a heart attack in Bhopal on Wednesday night, party sources said.

"The chief minister said that 200 days of work will be given in place of 100 days in a year under the Mahatma Gandhi National Rural Employment Guarantee Act (MNREGA) to the labourers in Left-wing extremism-affected areas, including Baihar, Birsa, Paraswara, Lanji development blocks of Balaghat district," an official statement said.

"Special recruitment drive will be held at the local level for the Scheduled Tribe (ST) communities of Baiga and others," it quoted Chouhan as saying.

The CM said that special facilities will be made available in those areas, so that they can be properly developed, law and order can be strengthened and employment opportunities can be made easily available to the people in the region, the statement added.

Programmes will be organised to promote special skills in these areas. Besides, arrangements will be made to provide a market to the local products, he added.