The India Meteorology Department has said that the rainfall intensity along the west coast is expected to decrease over the next 24 hours. 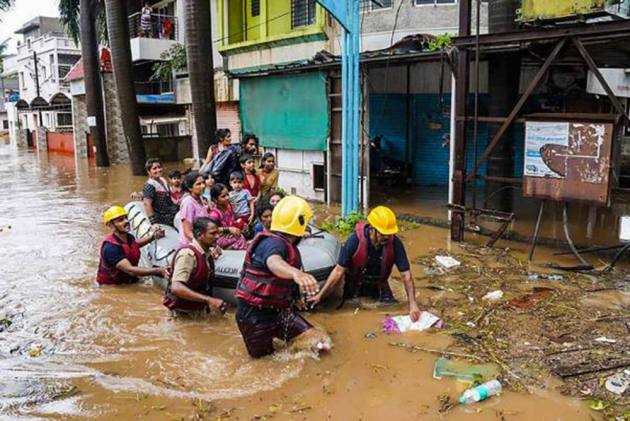 Torrential rains continue to wreak havoc in Maharashtra’s Pune and Konkan divisions with as many as 1,35,313 people being shifted to safer places while 112 people lost their lives due to various rain-related incidents including landslides and flooding, the state government said in a release on Saturday.

Of the 112 fatalities, 52 were reported in the state’s coastal Raigad district, officials said adding that 78,111 and 40,882 people in Maharashtra's Sangli district and Kolhapur district respectively, were evacuated as of Saturday.

Western Maharashtra's Satara district is one of the worst affected due to the torrential rains with as many as 379 villages being severely impacted. Further, six bodies were recovered from the landslide-hit Mirgaon village on Saturday as the death toll in rain-related incidents in Satara district rose to 28 by yesterday evening while at least 14 persons are still missing, an official said.

As many as 41 bodies have been recovered at Taliye village in Raigad where a landslide struck on Thursday. Several others are still missing, Deputy Inspector General of Police (Konkan) Sanjay Mohite told PTI.

The India Meteorology Department (IMD) said rainfall intensity along the west coast was expected to decrease over the next 24 hours.

A total of 99 people are missing in these areas, including 53 in Raigad, 27 in Satara, 14 in Ratnagiri, three in Thane and one each in Sindhudurg and Kolhapur. At least 53 people were injured in rain-related incidents.

As many as 3,221 cattle also perished, including 3,024 in Satara district and 115 in Ratnagiri, the official release said.

The National Disaster Response Force (NDRF) has deployed 34 teams for rescue operations in the state, its spokesperson said. Besides, teams of local administration and the Army are engaged in rescue and relief work.

In Satara district, at least 13 bodies have been recovered from the sites of landslide at Ambeghar and Dhokawale villages, collector Shekhar Singh said. The landslides had occurred on the intervening night of Thursday and Friday.

President Ram Nath Kovind called Maharashtra Governor Bhagat Singh Koshyari during the day and expressed his concern over the loss of life and property in the state due to rains and floods.

Deputy Chief Minister Ajit Pawar said financial assistance of Rs 5 lakh each will be given to the kin of the victims, while the Central government has announced Rs 2 lakh each. Besides, ration kits including rice, pulses and kerosene will be distributed in affected areas, he said.
The Maharashtra government was coordinating with the neighbouring Karnataka to ensure timely release of water from Almatti dam so as to ease the floods in the Kolhapur district which is upstream of the reservoir, he said.

As landslides proved fatal in many parts of the state, the government would come up with a plan to permanently relocate people living in hilly areas, said Chief Minister Uddhav Thackeray.

He was speaking to reporters at Taliye village, the site of the deadliest landslide.

"People living on hill slopes and hilly areas would be shifted and relocated. A plan would be made to shift small settlements from such places,” he said.

Two more landslides took place in the Raigad district, while three took place in Satara district including the one at Ambeghar village.

“Flooding is witnessed in Western Maharashtra during monsoon due to rise in water level of rivers. Hence, a policy would be formulated for the management of water in this region,'" the chief minister added.

"You will be taken care of. Don’t worry," Thackeray told the villagers.

In Ratnagiri district, towns of Chiplun and Khed were among the worst-affected by the floods.

“Schools as well as some private properties are being used as shelters as well as primary treatment centres for the injured. The real challenge is identifying and tracing missing people," a senior official of the NDRF said.

State minister Uday Samant said water has receded from some areas of Chiplun town, but some parts are still inundated.

The topography of Chiplun town is like a bowl, said a district official. "In the past, locals have seen roads going under water when it rains heavily. But this time it was different. In many places, the water level was higher than 14 feet, submerging entire houses," he said.