According to reports, India has a shortage of 1.9 million units of blood. The Covid-19 lockdown has further aggravated the blood shortage situation in the country. 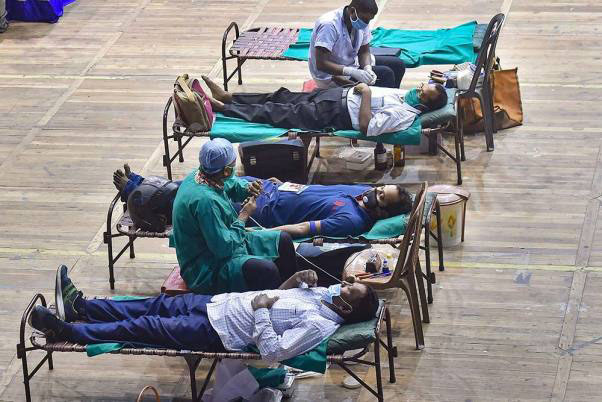 Blood transfusion usage ranges from trauma situations, elaborate medical and surgical interventions, cases of post-partum hemorrhage and in-patients suffering from cancer, anemia, sickle cell disease, hemophilia etc. Hence it is imperative that patients who require transfusion of blood as part of clinical management, have access to safe and adequate blood. However, many developing countries, including India have been struggling to have a robust blood transfusion system where safe blood is readily available.

The WHO Global Database on Blood Safety (GDBS) has projected that 1% of the population of a country need to donate blood to ensure basic necessity is taken care of. By the same calculation India has a shortage of 1.9 million units of blood as per the 2016-17 data.
As per the data released by Office of the Registrar General’s Sample Registration System (SRS) in July 2020, the Maternal Mortality Ratio (MMR) in India has dropped to 113 in 2016-18 from 122 in 2015-17 and 130 in 2014-2016. The goal as set by SDG 3.1 is to reduce the global maternal mortality ratio to less than 70 per 100,000 live births by 2030. If MMR has to be lowered as per the target, maternal deaths related to Post-Partum Hemorrhage (PPH) must be substantially lowered. In India, PPH, which is aggravated by prevalent anemia among pregnant women, accounts for 30 percent of maternal deaths. A significant number of these deaths can be well avoided if timely access to safe blood is not a challenge.

The lockdown owing to the Covid-19 pandemic aggravated the blood shortage situation across the country. This was the case in spite of a decrease in trauma cases owing to less road traffic-related injuries during lockdown and elective surgeries being postponed.
The Constitution of India lays down certain Directive Principles of State Policy (DPSP), which are mentioned in the Part IV of the Indian constitution from Articles 36 to 51. Unlike Fundamental Rights, the DPSP are non-binding in nature, however the Constitution itself affirms that ‘these principles are fundamental in the governance of the country and it shall be the duly of the state to apply these principles in making laws’. Article 47 of DPSP mentions that it is the “duty of the State…to improve public health”.

To ensure access to safe blood, it is imperative that a legislation on blood which guarantees safety, adequacy and sustainability is introduced and passed into a Law. As per a review done by WHO in 2018, 64% of reporting countries, or 110 out of 171 had legislation encompassing the safety and quality aspect of blood transfusion. Universal access to safe blood in India is fraught with several challenges, ranging from fragmentation, of blood banking system, infrequent institutional coordination, inadequate number of trained human resources, inadequate integration of blood transfusion services in health care systems etc. In addition to these low donations in India, rates remain a hindrance towards providing universal access to safe blood. Of the 118.5 million blood donations collected globally, 40% of these are collected in high-income countries, home to 16% of the world’s population.

For a safe blood transfusion service, it is best to switch over to 100% Voluntary Non-remunerated Blood Donors (VNRBD), as it is associated with low levels of transfusion-transmitted infection, including HIV and hepatitis viruses. Thus, as a country, one of our key strategies to enhance blood safety would be to focus on non-remunerated blood donors and phasing out even replacement donors.

The Indian Red Cross Society is one of the flag-bearers helping in promoting and facilitating the altruistic act of blood donation. Emergency situations like the ongoing pandemic reiterated the importance of organizations like that of the Indian Red Cross Society which has amplified ways to ensure availability of blood across the country.
Another initiative at the state level which has managed to promote VNRBD is the Jeevan Bindu programme, which was launched by the Biju Janata Dal (BJD) led by Chief Minister Naveen Patnaik about half a decade back to mark the 99th birth anniversary of former Chief Minister Biju Patnaik. The programme managed to become a “People’s Movement” in the state. Today, Jiban Bindu is a shining example of how safe blood transfusion through VNRBDs can be undertaken in India in large numbers with success.

For a paradigm shift to happen wherein our country will be able to have a sustainable and adequate safe blood supply, we as individuals have to change our perception towards voluntary blood donation and learn to recognize it as a duty which has to be discharged consistently and conscientiously. A critical step is the legislation which enforces and mandates it on the people of India.

(Dr. Sasmit Patra is a Member of Parliament (Rajya Sabha) from Odisha and belongs to the Biju Janata Dal. Sayantani Chatterjee is a Public Policy Consultant at Chase India.)

Doors Unlocked for Corporate Loot as Farmers Kept in Lockdown