Home  »  Website  »  National  »  Heartbreak For Hardik Patel: Is It End Of Road For Gujarat Patidar Leader?

Heartbreak For Hardik Patel: Is It End Of Road For Gujarat Patidar Leader?

With April 4 being the last date of filing of nominations, it may be difficult for Patel to challenge the judgment in the apex court. 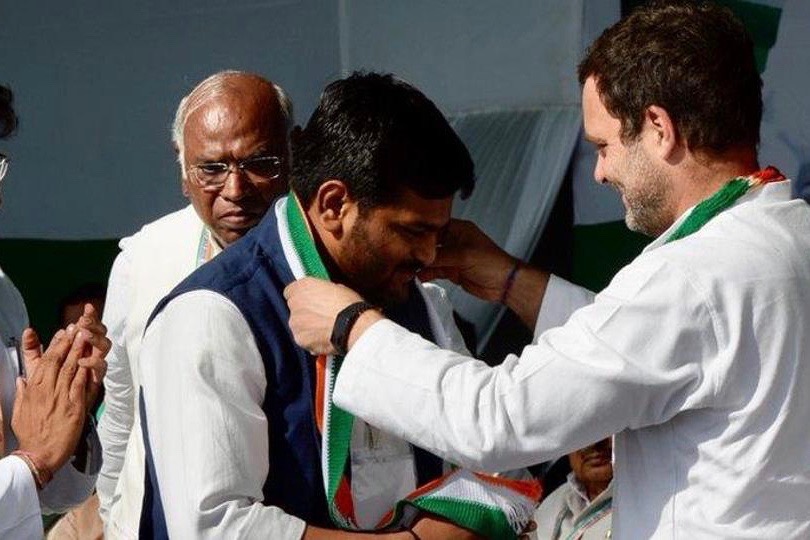 In a huge blow to the Congress, the Gujarat High Court on Friday refused to stay a sentence awarded to Patidar leader Hardik Patel in a 2015 rioting case. Patel, who recently joined the Congress party, was expected to contest the Lok Sabha elections from Gujarat's Jamnagar constituency.

The court order will have major implications on the Patidar leader’s political ambitions too. The judgment means the end of the road for Patel's political career as he will not be able to fight elections for at least eight years from now.

In July 2018, the Visnagar sessions court had sentenced him to two years’ imprisonment for rioting and arson in Visnagar town during the 2015 Patidar quota agitation. Though he was granted bail and his sentence was suspended in August by the high court, his conviction was not stayed.

“It is extremely unlikely that he contests the elections unless he files a special petition and secures an order from Supreme Court suspending the sentence. Normally, the suspension of sentence is not granted. Here the problem is that the appeal has gone to High Court and High court has refused to suspend the sentence,” said senior Supreme Court advocate Sanjay Hegde.

With April 4 being the last date of filing of nominations, it may be difficult for Patel to challenge the judgment in the apex court.

A convicted person, as per provisions laid down under Section 8 of the Representation of People (RP)  Act is banned from contesting elections for six years after the completion of his/her prison term. In 2013, the Supreme Court had also ruled: "A person convicted of any offence and sentenced to imprisonment for not less than two years shall be disqualified from the date of such conviction and shall continue to be disqualified for a further period of six years since his release."

Since Hardik Patel has been sentenced to a two-year jail term, the ban on him from contesting elections will continue for a total period of eight years. However, if Patel succeeds in getting his conviction quashed by the Supreme Court, the ban will automatically become void.

Given that the Lok Sabha polls for constituencies in Gujarat are just weeks away and the legal process of appealing against the Gujarat High Court verdict in the apex court and getting a verdict on the appeal will take months, if not years, it can be safely assumed that Patel is out of the electoral fray for now.

Justice Uraizee of Gujarat High Court in his order observed that Patel had several criminal cases and 17 FIRs registered against him submitted by the state government. The entry of the Patidar leader was expected to infuse fresh energy into the Congress party as some recent surveys showed that Congress is gaining ground in the state.

Patel, who led a massive movement for reservation in government jobs and education for Patidars in Gujarat, joined the Congress party on March 12 in the presence of party president Rahul Gandhi.

Congress leaders were unavailable for comments on the court case.

Why Am I Being Asked About My Religion, Asks Urmila Matondkar