The fact that people lowered the guard and didn’t follow Covid protocols after the first wave was over is 'certainly one valid explanation' for the surge, say experts. 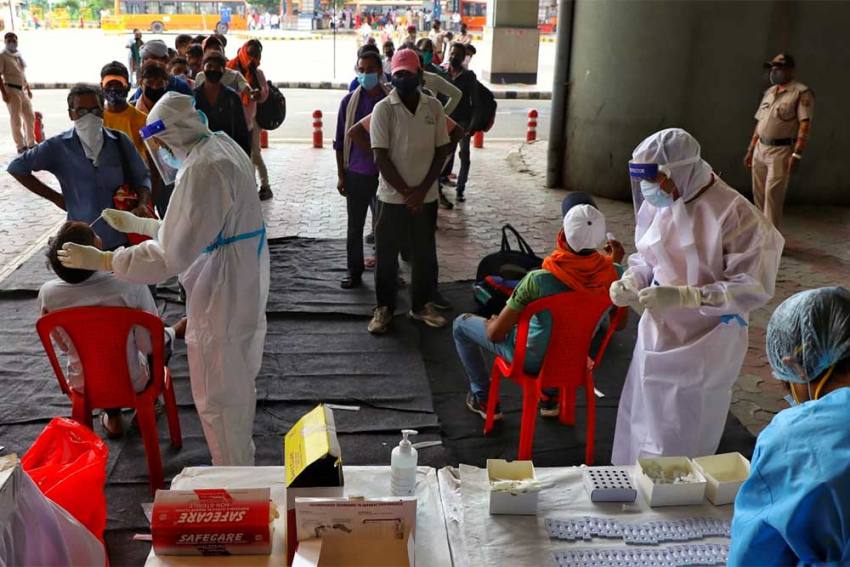 India’s Covid-19 cases are rising exponentially but what is the cause behind it? There are no clear answers but top scientists say the complex interplay of mutant strains, a hugely susceptible population made more vulnerable by-elections and other public events and the lowering of the guard are primarily to blame.

India’s COVID caseload rose to 1,32,05,926 (1.32 crore, 13.2 million) with a record spike of  1,45,384, the Union Health Ministry said on Saturday, in what many say is a second wave that is surging more powerfully than the first. And just like there were no answers to why there was a slide earlier this year, there is no clarity on why the numbers are rising so sharply.

While there are many imponderables and many things unknown, virologists Shahid Jameel and T Jacob John are agreed that not following COVID-19 protocol, including informing people they must continue with precautions even after being vaccinated, and a sluggish vaccination drive are responsible.

Jameel said the interplay of mutants and vaccines over the next couple of months will decide the future of Covid in India and the world.

“The intensity of the surge also suggests that there were a huge number of susceptible people after the first wave,” the director of the Trivedi School of Biosciences at Ashoka University in Haryana told PTI.

The Centre warned earlier this week that the next four weeks are critical and people’s participation in helping control the second wave of the contagion is pivotal. NITI Aayog Member (Health) V K Paul said the pandemic situation has worsened with a sharp rise in cases and a large part of the population still susceptible to the virus, without giving any clear explanation on why this is happening.

The fact that people lowered the guard and didn’t follow Covid protocols after the first wave was over is “certainly one valid explanation” for the surge, Jameel said.

“Everything opening up to pre-Covid levels and behaviour that was no longer risk-averse exposed the susceptible population in a big way. A new factor is emerging mutants -- both imported and homegrown,” the eminent virologist added.

“Lowering of the guard was led by the central government and followed by all political parties, all religious groups, and the public at large. Schools and colleges were opened without vaccinating all staff. This explains partly the second wave,”  John told PTI.

“Wherever infection was rising, stricter imposition of discipline should have been taken but with the elections ahead, no leader wanted that. Elections during pandemic had to be carefully planned,” the renowned virologist told PTI.

The scientist also agreed that variants are the other reason for the second wave, adding that it was too late for India to look for mutants.

“The two factors came together and we were leaderless in response at the critical time. The speed of spread in the second wave is twice as fast as in the first wave.  Partly due to variants and partly lowering of the guard,” John explained.

Referring to a Health Ministry briefing on March 24, Jameel noted that the UK variants now show up in about 80 per cent of cases from Punjab.

“A new double mutant has emerged in India and is reported in 15-20 per cent of cases analysed from Maharashtra. If this percentage goes up further, it would be a clear indication of its role in the Maharashtra surge,” said the virologist.

In India, variants first identified in the UK, South Africa and Brazil have been found.

In late March, the National Centre for Disease Control (NCDC) announced that a new variant had been identified in samples of saliva taken from people in Maharashtra, Delhi and Punjab.

The genome sequencing carried out by Indian SARS-CoV-2 Consortium on Genomics (INSACOG), a consortium of 10 labs in India, identified two important mutations in the variant dubbed as “double mutant”.

Explaining that the UK variant is known to be about 50 per cent more infectious, Jameel said one of the two mutations in the double mutant was also found in California, US, where it was associated with increased transmission.

According to John, the government started the drive too late and no outcome goal of vaccination was defined.

“India started slow vaccine rollout in January third week, but it was first a token reward to healthcare workers who were vaccinated even when there was no need -- and we wasted a lot of vaccines,” he said.

“Was advance purchase order given to vaccine companies to get production accelerated during last year itself before approvals were obtained? “ John asked.

Jameel said there was “poor communication” by officials to people who were vaccinated on how they must continue with precautions like masks and social distancing.

Describing India’s COVID-19 situation as “curious”, Jameel said the country was on a falling curve of daily infections when vaccinations started in mid-January.

“For various reasons, those eligible, including healthcare and frontline workers, were hesitant to get vaccines. Those above 60 also did not show enough eagerness even though cases had started going up by early March.

“Now we are on a very fast rising curve with only 0.7 per cent Indians having received both doses and only about 5 per cent having received one dose. That is too low to make an impact,” he added.

He noted that there was no way to predict that younger people would be affected in this surge.

Noting that supply may be an issue, Jameel said India has the capacity to inoculate with 10 million doses of Covishield vaccine per month and three million Covaxin doses per month.

“Supply can also be boosted by giving emergency use approval to Johnson & Johnson vaccine and Russia’s Sputnik V vaccine. Both of these have received approvals in other countries and have manufacturing partners in India,” he added.

According to the Health Ministry on Saturday, the number of active cases has breached the 10 lakh mark again after around six-and-a-half months, while the death toll due to the viral disease has gone up to 1,68,436 with 794 more fatalities, the highest since October 18 last year.

The active caseload was at its lowest at 1,35,926 on February 12, accounting for only 1.25 per cent of the total number of cases in the country.

In a recent study, scientists, including those from the Indian Institute of Technology (IIT) Kanpur, predicted that the ongoing second-wave could peak by mid-April, following which the infections may see a steep decline by the end of May.

No Lockdown In Delhi But New Restrictions To Be Imposed Soon: Arvind Kejriwal