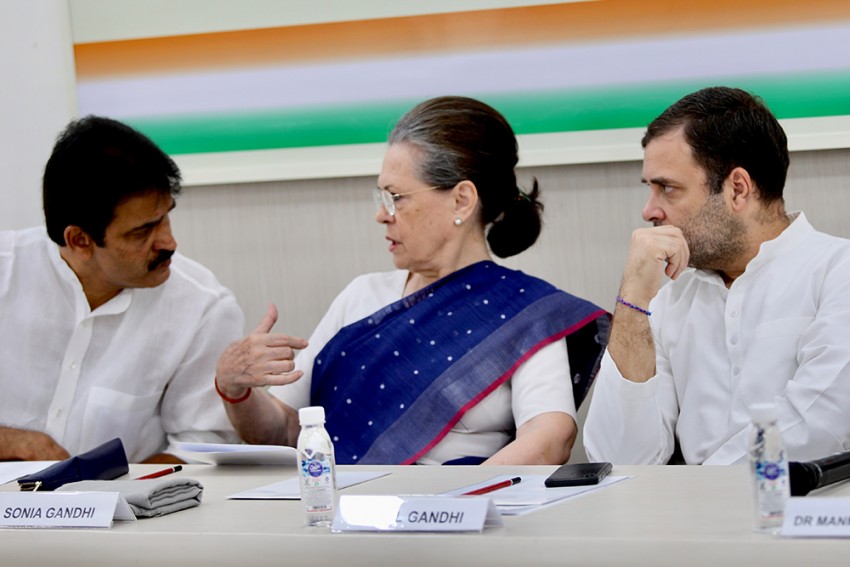 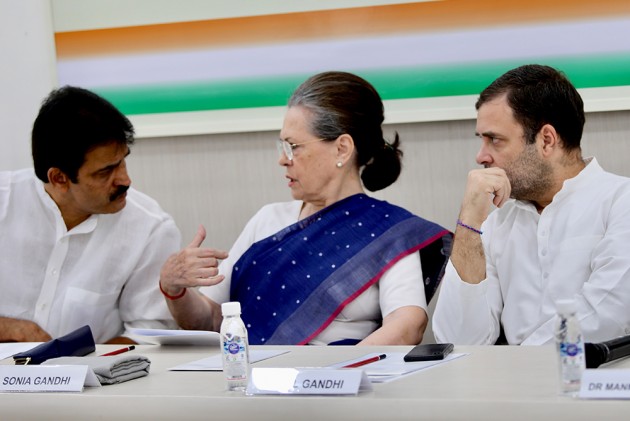 Sonia Gandhi was named interim Congress president on Saturday, returning at the helm after almost 20 months.

The announcement was made Saturday night after Congress Working Committee (CWC) accepted Rahul Gandhi's resignation during its second meeting of the day.

A number of leaders, including state chiefs and MPs, backed Rahul Gandhi to continue on the post despite his refusal to reconsider his resignation.

The CWC then decided to name Sonia Gandhi as the interim party chief.

Below are the highlights from the meeting:

11:19pm: New Congress president to be elected at AICC session

11:13pm: Rahul Gandhi's instinctive moral compass evident from his taking accountability for taking responsibility for the defeat. We look to him for continued support and guidance, says Venugopal

11:12pm: Rahul Gandhi gave a new sense of aggression to the party and opened up new opportunities to the younger generation. Emerged as a beacon of hope for those who cherish the idea of India: KC Venugopal, AICC general secretary

11:11pm:  Resolution 1: CWC places on regard our sense of appreciation for leadership of Rahul Gandhi. Rahul Gandhi stood up fearlessly on issues, he raised his voice boldly against the growing atmosphere of fear in the country

10:38pm: In the absence of consensus, CWC also urges Sonia Gandhi to take over as interim chief. But Sonia reluctant, insists it will be counterproductive after the tough stance taken by Rahul Gandhi for a non-Gandhi chief, sources tell Outlook

10:25pm: Important that the PM and govt makes it clear what exactly is happening in J&K. The PM and government must assuage the people, says Rahul Gandhi

10:23PM: Some reports have come that things in J&K are foing very wrong. We stopped our dleiberations to have  a presenttaion, says Rahul Gandhi

9:36PM: Rahul Gandhi is back for the meeting

9:22PM: Several senior leaders continue to insist that a non-Gandhi Congress President will not enjoy a pan-party mandate and urge CWC to convince him to stay on. Rahul Gandhi is not present at the meeting.

8:54PM: Resolutions by 5 sub-groups endorsing faith in Rahul and appreciating his contribution as Congress President likely, say sources. However, resolutions unlikely to influence Rahul's decision to quit as the party chief.

8:50PM: A section among senior leaders says the next party chief should be announced today itself, sources told Outlook, adding a further delay after the hype will allow BJP to build on the narrative of infighting within the Congress.

8:38 PM: UPA chairperson Sonia Gandhi and Congress general secretary Priyanka Gandhi have arrived for the CWC meeting at the party headquarters in the national capital.Â  Sonia and Rahul had earlier recused themselves from deliberations.Â

8:00PM: The grand old party is unlikely to announce the name of the party chief today, sources told Outlook, adding the announcement may come in another day or two.

Earlier on Saturday, it was speculated that the next Congress president may be named by 9 pm tonight after the five regional groups complete their discussions and present the names before the CWC. However, the lack of consensus seems to have prolonged the process and therefore the announcement, for now.

4:20pm: Mallikarjun Kharge rules himself out of the race

2:20 PM:Â Senior Congress leader and Rajasthan Chief Minister Ashok Gehlot on Saturday ruled himself out of the race for party chief.

Speaking to reporters after the Congress Working Committee (CWC) meeting, he said: "I am not among those leaders who push their names for the party president's post. My opinion in this matter is known to all."

1:57 PM: Congress spokesperson Randeep Surjewala has said thatÂ CWC asked Rahul Gandhi to remain party chief, but he refused saying he wanted to accompany party workers in the fight against the government. "Rahul's resignation as Congress chief still under consideration, CWC to make a decision in the evening," he said.Â

Sonia Gandhi on leaving from Congress Working Committee meeting: Now consultation(to decide next party chief) is going on and naturally me and Rahul ji cannot be a part of it pic.twitter.com/OcMoztJtuQ

12:35pm:Â Sonia Gandhi, Rahul Gandhi leave consultation process on next Congress chief, saying they can't be part of this exercise

12:05pm:Â Mukul Wasnik is being seen as a frontrunner - neither too old, nor young. Wasnik has vast organisational experience, has worked in the NSUI and Youth Congress before moving to the AICC and has served as a Union minister.

11:59am:Â Rahul Gandhi not in favour of an ageing leader, several CWC members believe the next party president should be a compromise between the Old Guard and younger leaders, say sources

11:39am:Â The meeting comes after several senior party leaders such as Shashi Tharoor and Karan Singh voiced concerns over lack of clarity on the leadership issue.