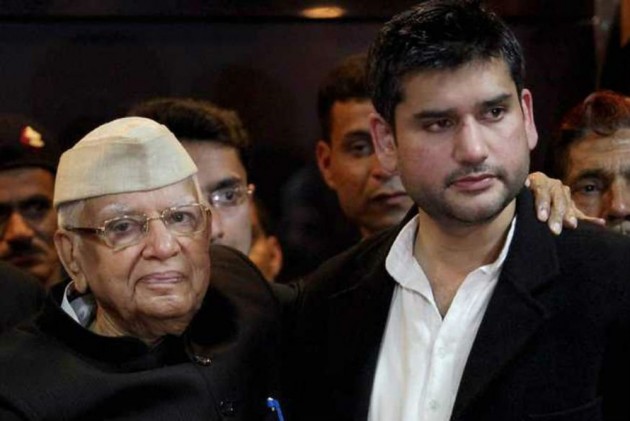 The Delhi Police Crime Branch Saturday questioned the wife and family members of Rohit Shekhar into his unnatural death case.

She was questioned about her entry in their Defence colony residence, her schedule -- what she did during the day and why she did not find it odd when Shekhar was sleeping throughout the day, they said.

Shekhar's brother Siddharth and househelps -- Martha and Golu -- were also questioned since they, too, were present at his residence at the time of his death, the sources said.

The officials suspect that an insider was involved in the murder, they said.

The Delhi Police had Thursday registered a case of murder into the death of Shekhar, 40, hours after his autopsy report stated that he died of asphyxia due to strangulation.

Shekhar, son of late Uttarakhand chief minister ND Tiwari, was brought to Max Hospital in south Delhi around 5 pm on Tuesday in an ambulance and doctors declared him dead.

The case has been transferred to the crime branch for investigation.

Shekhar's cousin Rajeev and his wife Kumkum are also being questioned in connection with the case.

Police sources said at least five-six calls were made from Rohit's phone to Kumkum from 2 am to 4 am on the intervening night of Monday and Tuesday. They said police is trying to ascertain the reason why did Shekhar contact her at the odd hours.

Neighbours claimed that the couple often had fights and just last month a PCR call was made by one of them.

"They had a fight last month. A PCR call was also made in this regard. The local police had come to the residence of Shekhar. We could hear noises and we were out to check," said a neighbour requesting anonymity.

"My son was under some stress but I don't want to talk about it. By the time I reached home, Apoorva had made him lie down in someone's car. When I saw his condition, I had little hope left about his survival," she said.

"I trusted Apoorva and did not question her as to why was Shekhar sleeping till so late," she said.

Ujjwala said Shekhar, 40, and his wife did not share a cordial relationship and "they had issues since day one of their marriage".

"Apoorva and Shekhar tied the nuptial knot in 2018. It was a love marriage. Before that, they were seeing each other for a year," she said.

"They even took a break in between. Shekhar maintained distance from her and said he did not want to marry her. After elections in March 2017 UP, we took a flight and came to Delhi," she said.

Shekhar's father-in-law said, "My daughter cannot do something like this. When I got to know about his death, I came down here. Police are probing the matter and soon we will know how he died."

Among the seven CCTV cameras installed in the premises, two were not functioning, sources said. PTI