Saurav's presence in the dressing room can be destructive and might disintegrate the team if he is not treated with importance and given the respect that he, by all means, deserves. 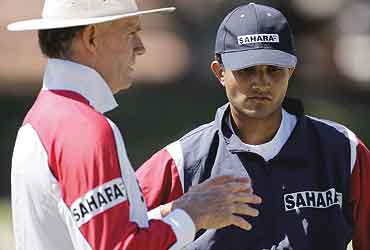 India's coach Greg Chappell has made it difficult for his Pakistani counterpart Bob Woolmer to chalk out game plans against his team because every Indian batsman today is now capable of batting at any number. It would be interesting to see how Woolmer counters that ploy during the India-Pakistan series.

The other point that would be interesting to see is if Chappell and Rahul Dravid are brave enough to throw their batting order surprises at Pakistan. It can become very tricky and can also backfire, needless to say people have short memories in this part of the world and past achievements can easily go down the drain by just one mistake.

As I see things, it becomes extremely difficult for any captain to see Mahendra Singh Dhoni coming out with Virender Sehwag to open the innings instead of a more conventional pair of Sehwag and Gautam Ghambir with Irfan Pathan following at one-down instead of Dravid.

So you first need to assess and visualise what the opponent is capable of and how he can surprise. And then be prepared with plans and contingency plans.

Woolmer might be under pressure because of it being a home series but Chappell will have a mountain on his shoulders because of the Saurav Ganguly factor. Their feud resulted in Ganguly's sacking and then controversial ouster after the second Test against Sri Lanka.

Ganguly is the only captain to win a series in Pakistan. Now Ganguly's presence in the dressing room can be destructive and might disintegrate the team if he is not treated with importance and not given the respect that he, by all means, deserves.

Naturally, every player should be selected on present day form that makes it even more interesting to watch how the Indian team management handles the situation if it decides to prefer Wasim Jaffer or Yuvraj Singh over Ganguly.

Chappell's role again becomes important. But trust me, this Ganguly factor is extremely sensitive and crucial!

Chappell and Woolmer are personalities with contrasting backgrounds and present reputations. Most cricketers of my generation were still toddlers when both of them hung their boots. But Chappell remains the one who is still admired, respected and followed because of his heroics with Australia.

Woolmer, we respect, because of his ability to do something different and to transform a struggling multi-talented team into a winning unit, be it Pakistan or South Africa or Warwickshire.

I have the highest respect and regard for Javed Miandad, but the same team was struggling under his stint. I believe, all great cricketers somehow find and will continue to find it difficult when they wear the coach's shoes and we have the examples of Kapil Dev, Sir Viv Richards and Miandad.

Chappell also had his share of problems very early in his tenure in India with his infamous feud with Ganguly. But you don't find any more of these disputes with Pakistan. These problems between the players and coaches are basically clashes of personalities and egos. Legends of the past want to do things their way while the present day masters have different ideas, approaches and perceptions towards the game.

The role of the coaches, as far as I am concerned, is to organise and coordinate quality training camps, individually discuss problems with the players, chalk out match plans and strategies, and leave the rest to the captain.

Unfortunately, legends of the past, in their capacities as coaches, go overboard and get involved into team selections and then making it an ego issue if over-ruled by the captain. The lesson we learn is simple -- both the parties need to increase their tolerance and patience level, and accommodate each other as much as possible. To achieve the desired results in every series. Particularly in the mother of all series, this is the key.

It would be unjustified if I lay all the responsibilities on Chappell and exempt Dravid of his charges. But Dravid has his own problems. He is coming as captain to Pakistan that is certainly the hardest tour in terms of cricket and expectations any Indian team can have.

Dravid will be the backbone of Indian batting as Sachin Tendulkar is also coming after missing most of last year with a tennis elbow and V.V.S. Laxman is still searching for his maiden big innings against Pakistan.

We all know Sehwag is entertaining but at times poor and the Indian team would prefer to rely more on Dravid rather than Sehwag. While saying this, I am not at all questioning the talent of Sehwag but he is definitely not the man to trust, he is more like Shahid Afridi.

As regards Pakistan, Inzamam-ul Haq is in form and he is leading the team well but Shoaib Akhtar is the man to watch. Besides his fitness and form, I am particularly impressed with his slower ones that he used effectively and with perfection against England.

Believe me, it is not as simple as it looks like when a bowler with the run-up as long as that of Shoaib sprints in and then drops his pace in the same action. It not only deceives the batsman, but also puts unusual pressure on the body of the bowler, and particularly on someone like Shoaib who does not have the physique of a genuine fast bowler. A couple of excellent spells by Shoaib and the series can become easy for Pakistan and difficult for India.

Among other Pakistani batsmen, Younis Khan is due for some runs after his poor form against England. He should have the confidence particularly after he scored more than 500 runs in India last year. Mohammad Yousuf is looking good but he needs to start developing the habit of converting good starts into big scores rather than throwing away his wicket while trying an extravagant shot.

At least in this series, he has to be precise with his calling between the wickets because as far as I am concerned, he is worse than Inzamam when it comes to judging cheeky singles.

I have been reading that Inzamam is concerned about the opening partnership. I think it is an exaggeration and over-statement because if you have someone like Afridi in the team and you are playing against India, you don't think for a second and tell Afridi to pad up and open the innings. The logic is simple: Afridi enjoys psychological advantage over Indian bowling.

This series, weather permitting, will be thrilling, full of excitement and fun to watch for more than one reason. I will have my fingers crossed and though I still believe Pakistan is the best bet, I would not like to put my neck in trouble by predicting in this game of glorious uncertainties.