'Confidence An Important Ingredient For Success'

The left-arm seamer says the confidence gained in New Zealand, where he bowled well, has been helping him to perform well in the World Cup. 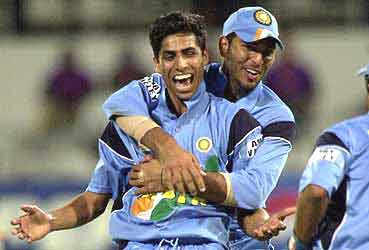 The tour of New Zealand may have been disastrous for the Indian cricket team but for Ashish Nehra, the highly-improved fast bowler, it marked the turning point of his career.

Nehra, who has been highly impressive in this World Cup, says the confidence gained in New Zealand, where he bowled well, has been helping him to perform well in this competition.

"To my mind the tour to New Zealand was very important," said Nehra. "I could take important wickets and my line and length was good.

"Confidence is a very important ingredient in a fast bowler's success." There is no doubt that Nehra has been bowling with a lot of confidence in this World Cup. He has satisfied his captain whenever the ball has been given to him.

His crowning glory came in the match against England which he played despite an ankle injury and returned a career best six wicket haul. His 6-23 was the fourth best recorded in a World Cup, though later it was pushed to sixth by Andy Bichel and Shane Bond.

"I thought the team needed me and I volunteered to play in that game," Nehra said. "An ankle injury does not heal easily. But I wanted to go through the pain barrier and play my part for the team.

"I still go with my ankle fully strapped. It is not easy but I manage," he said.

Nehra has been prone to injuries but he says people should stop talking about his fitness now that he has been playing international cricket non-stop for the last one year.

"You cannot stop people from commenting whatever they want to say but my track record in the past one year is an apt comment on my fitness," he said.

"Since the tour to West Indies (last year), I have played non-stop cricket, whether in Tests or one-dayers. I toured West Indies, then England and Sri Lanka and continued with the series against West Indies at home and then the tour to New Zealand.

"This is an ample testimony about my fitness. Even Zaheer Khan missed the one-day series against West Indies (at home) and (Javagal) Srinath, of course, was missing for a long time," he said.

And lest anyone feels that there is a rivalry between him and fellow left-arm seamer Zaheer Khan, Nehra said the two enjoyed the best of relationship.

"We share a very healthy relationship. If he takes two wickets, I too want to do my bit and claim wickets." Nehra also does not grudge that Zaheer gets the new ball with Srinath while he comes only as a first change bowler.

"It does not matter to me whether I use the new ball or not as long as it helps the team. I am okay," he said.

Nehra said the important thing about any bowler is to maintain a tight line and length and that is what he has been trying to do in the World Cup.

"The line is very important. I use my wrist to get the ball to move in and out but I like to be very accurate in my line and length.

"In one-day cricket, you could go for runs quickly. It's a fast game and one should be careful with experiments. Even with your bouncers, you need to be careful."

Nehra was pleased that New Zealand captain Stephen Fleming rates him as a very impressive left-arm seamer in world cricket at the moment.

"I got him four or five times in New Zealand and as I said, it all boils down to confidence."

Nehra had a miserable tour to South Africa a couple of years ago and he put it down to injury which was hampering his performance.

"I did not have a good tour to South Africa but it was because I was coming out of injury and it's easy to find your rhythm in Tests straightaway. I also suffered because two practice games before the second Test were washed out." But thanks to the new-found stress on fitness in the Indian team, Nehra is certainly enjoying the results.

"I can see it even after playing so much of cricket, we still have the energy to carry on. The same goes in fielding and I feel even this part of my cricket has improved because of fitness," he said.

Nehra is also keen to make a contribution with the bat though he would not want it to come to him in the World Cup.

"I have contributed with the bat whenever given a chance. But I hope I am not required to bat and our batters do the job," he said.

He gushed at the mention of Pakistani legend Wasim Akram and says it's a tribute to his fitness, that the great left-armer has lasted this long in international cricket.

"Everything about him is impressive. He has been doing it for the last 15-16 years. I am a big fan of his. He has variety, line and length... everything. To take 500 wickets and last that long is a tribute to his fitness," he said.

'Any Resemblance To Azhar Is Incidental'