Subhash Kapoor’s web series is a classic example of Bollywood’s ingenuity in blatantly stealing episodes from real life and proffer them with an unabashed disclaimer that it is purely a work of fiction. 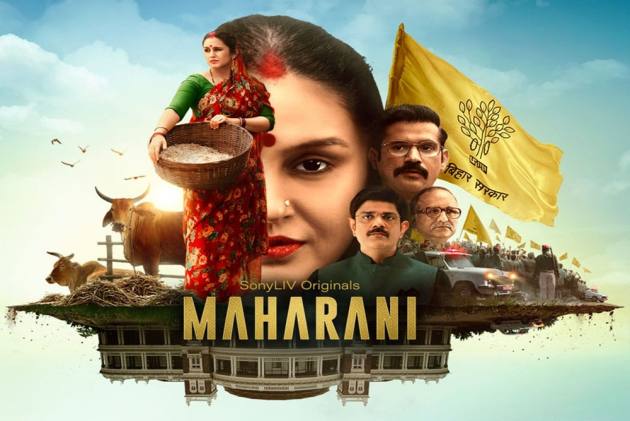 Is Maharani, the much-talked-about web series, now streaming on SonyLiv, a biopic on Rabri Devi? Well, yes and no! Yes, because the eponymous character played by Huma Qureshi has unquestionably been modelled on Bihar’s former chief minister. And no, because the sequence of events, as narrated in the series has been distorted enough to make it appear totally fictional. The lines between the real and the reel are, in fact, so blurred that one begins to wonder whether it is a case of the art imitating life or life imitating art.

Subhash Kapoor’s web series is a classic example of Bollywood’s ingenuity in blatantly stealing episodes from real life, tweak them in the name of cinematic licence, spice them up with the usual filmi masala and proffer them with an unabashed disclaimer that it is purely a work of fiction. And then, let the PR cat quietly out of the bag about the “real inspiration” behind the series to create all the hype in the run-up to its release.

So, even if a disclaimer proclaims at the start of each and every episode that it has nothing to do with anybody living or dead, one gets an uncanny feeling that it has a lot to do with what Bihar was like during the 15-year-long era when Rashtriya Janata Dal president Lalu Prasad and his wife Rabri Devi took turns to rule the state. Among other things, it shows the fodder scam, the massacre at Laxmanpur-Bathe, where 58 Dalits were killed by Ranvir Sena, an outlawed upper-caste militia headed by Barmeshwar Mukhiya. It is a different matter that in the series, chaara ghotala (fodder scam) is called daana ghotala, Laxmanpur-Bathe simply as Laxmanpur and Ranvir Sena as Vir Sena led by Rameshwar Mukhiya. All through the web series, there are several references to the incidents that took place between 1990 and 2005 in Bihar. Even the characters have been drawn liberally from real life. Huma calls her screen husband played by Sohum Shah, Sahab -- that is what Rabri does in real life while addressing Lalu.

Hardly surprising then, Maharani has raised the hackles of Lalu Prasad’s family. Lalu’s daughter Rohini Acharya has hit out at the makers for mocking her mother Rabri Devi as being an illiterate chief minister. She says that her father may not have provided the proverbial heaven to the people of Bihar during his reign but he gave a voice to those who had until then no right to live a life of dignity. Rabri’s estranged younger brother, former MP Sadhu Yadav, too came in the defence of her sister saying she was not an illiterate woman, as shown in the web series.

Rabri has been portrayed as the reluctant chief minister of Bihar who was happy raising her children, milking the cows and looking after her village home in the Gopalganj district of Bihar before she was anointed the head of the state government much against her wishes, by her husband. In the web series, she takes over the reins of the government after her chief minister-husband is confined to bed after an unsuccessful assassination attempt on him.

In real life, however, Rabri was chosen only after Lalu was charge-sheeted and jailed in the fodder scam. She had to learn the nitty-gritty of governance from his trusted lieutenants in the party and the bureaucracy. But nothing can be farther from the truth than what has subsequently been shown in the web series. Here, Rabri has been depicted as someone who actually unearthed the fodder scam after she took over as the chief minister. Also, she evolves into a strong chief minister who sends her husband to jail for his complicity in chaara, err daana ghotala.

It is to the credit of the makers and the writers of Maharani that they lifted the abundant materials available in the public domain about Lalu and Rabri – true as well as apocryphal -- and presented them as if everything was a figment of their imagination. In doing so, they apparently saved themselves from the possible defamation suits. Of course, there are thousand and one references to the real incidents, and the characters are drawn from the Lalu-Rabri era in Maharani. Anyone who has kept a tab on Bihar’s politics in the past three decades cannot help getting an uncanny sense of déjà vu while watching it. Officially, they may claim the web series to be a work of fiction but in reality, most of it is certainly not.