After Wrecking Havoc At Ramjas, ABVP Threat Forces Another DU College To Call Off Drama Fest

Khalsa College has been forced to call off a drama festival after ABVP threatened over 'anti-national' themes. 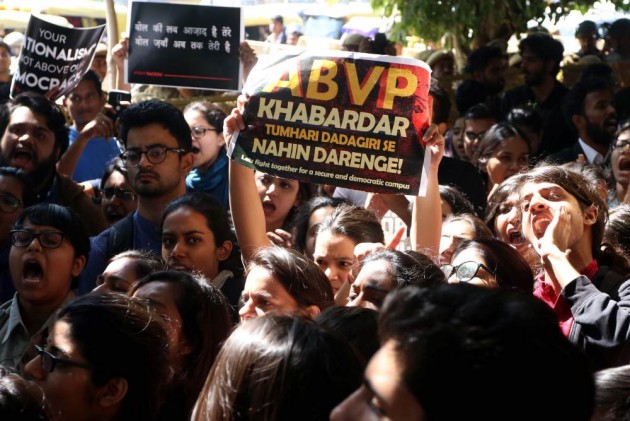 After wrecking havoc at the Ramjas College, RSS-backed student organisaion ABVP has forced the organizers of a drama festival in another Delhi University College to call of the event.

The Indian Express reported that SGBT Khalsa College was forced to “postpone” a street theatre festival after ABVP-led Delhi University Students’ Union (DUSU) issued repeated threats over the themes of some of the plays, which they deemed to be anti-national. Staff advisor of the theatre society at Khalsa College, Saikat Ghosh, told the newspaper that the programme was cancelled “under duress”.

Read Also: ‘Then They Started Chasing Us Three Girls And Screamed 'Azadi Legi’

“The police also appealed to us to call off the event in the interest of restoring peace and normalcy on the campus,” said Ghosh.

According the report, DUSU president Amit Tanwar has claimed that they did not threaten anyone but said he had told the college principal to cancel the competition if the plays contained anti-national themes. Tanwar claimed that principal Jaswinder Singh had called him up on Thursday morning to ask if it was a good idea to hold the festival.

But the principal said the festival was not cancelled and has only been postponed. “We will hold the competition at a later date, when the environment is more peaceful,” he said.

The Delhi university campus had witnessed clashes between student protestors and ABVP workers after ABVP stalled a seminar at Ramjas College questioning the invite to JNU student Umar Khalid, who was arrested last year on charges of sedition for a rally at JNU where some allegedly shouted anti-national slogans.