Time For A Rethink

It's time for the APHC to rethink priorities. To make up its mind whether it is pro-India, pro-Pakistan, anti-India or pro-Kashmir. (Also See: Amanullah Khan Arrested ) 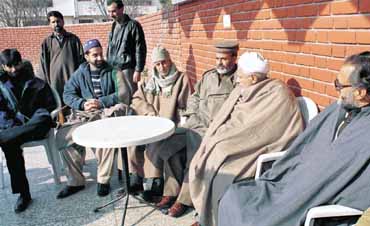 A Role For Pakistan

The simultaneous announcement of the withdrawal of the ceasefire and the invitation to General Musharraf from Mr. Vajpayee has established an unequivocal relationship between the Kashmir issue and Pakistan. This amounts to an implicit admission by India that Pakistan has a role to play in the establishment of peace in Kashmir as well as the resolution of the problem.

The fortitude of the Kashmiris played a decisive role in securing the elusive invitation for Pakistan. However, ad interim the message for the Kashmiris is de trop. Their fate will be discussed in absentia.

The Indian perception in search of a solution has come a full circle. Pre-invitation efforts to seek peace in Kashmir were overtly biased in favour of an internal solution. The APHC was the focus of attention. Involvement of Pakistan at a later stage was subject to fulfillment of certain conditions. An end to crossborder terrorism was a prominent pre-condition. The APHC has no role in the new scenario. The variables are the same. The intensity of militant activity has shown no signs of abating. Yet, there is a complete u-turn in New Delhi's policy.

The shift may have been dictated by exigencies at home or external considerations, and left New Delhi with little room for manoeuvring. Whatever little manoeuverability New Delhi may have had, it has used to elbow out the Kashmiri leadership, with Pakistan quietly acquiescing.

The absence of any strand of Kashmiri representation at the negotiating table needs to be analysed. The main topic under discussion is supposed to be Kashmir, the brunt of military action from either side is being faced by the Kashmiris and, yet, they have no representation. India and Pakistan view the issue as a territorial dispute and will at the most discuss Kashmir (the land), but who will discuss the Kashmiris (the people)?

The quixotic behaviour instrumental in the banishment of the APHC from the talks finds its chronological origins in the unilateral ceasefire announced by the Hizbul Mujahideen commander, Abdul Majid Dar. It was a unique opportunity to portray a more humane face, and to convey the message that Kashmiris do understand the language of peace, if an honourable settlement is made.

The ceasefire was announced from Srinagar for a period of one month. It was called off after 15 days by a fellow Kashmiri, Syed Salahuddin, from the safe confines of Islamabad. Throughout these 15 days, Mr. Salahuddin indulged in provocative flummery, making it blatantly obvious that he was against the ceasefire.

The non-combatant APHC was not too happy either. Far from welcoming the ceasefire, it termed the step hasty.

India played its cards well. It welcomed the ceasefire and termed the Hizb its very own people. But it cleverly procrastinated under the garb of framing the modalities of the ceasefire to allow the differences among the Kashmiris to grow.

An enervated, maliciously isolated Majid Dar quietly withdrew in his shell. Pakistan was never happy with the ceasefire. It worked cleverly behind the scenes through Syed Salahuddin, and saw to it that the ceasefire was called off. India earned its share of brownie points, Pakistan escaped unscathed and the Kashmiris got the flak.

If the APHC faltered at the first ceasefire call, it did not do any better at the second ceasefire call. The APHC was caught in a muddle and waffled around. It was tardy in its response and very grudgingly gave a cautious welcome mired with conditions.

Pakistan welcomed and reciprocated the ceasefire along the LoC. Covertly, the militants upped the ante and recorded the highest number of hits during the ceasefire period. True to its "fault-finding tendency" the APHC was quick to point out the high number of casualties as a result of retaliatory action taken by the Indian military authorities.

The APHC chose to keep silent on the increased intensity of the strikes by militants. Pakistan ensured peace along its side of the LoC and earned some desperate grace marks. India succeeded in conveying its yearning for peace. And what did the Kashmiris convey? India was addressing an international audience through the ceasefire while the APHC was busy playing to the galleries across the border. The Kashmiris once again came out the lone losers.

The Visit That Never Was

Not content with the earlier forays into disaster, the APHC now wanted to visit Pakistan, on the invitation of its foreign office. For the first time, it seemed that the APHC was playing its cards right. A visit by the Kashmiri leadership to discuss Kashmir, cleared by Indian authorities by issuing travel documents, and facilitated by Pakistan by issuing visas, would have been an implicit official endorsement of the Kashmiris as a basic party to the dispute.

Too good to be true. New Delhi created a miasma by cleverly making an unofficial leak, indicating that a particular member of the APHC would not be given travel documents. An attempt was made to lionise this particular member, whose rabble-rousing demagoguery had invariably gone against the interest of the Kashmiris.

The APHC ignored the importance of the visit and instead joined issue with India over the composition of the delegation. In the melee of claims and counter claims, the visit could not take place.

In the run up to the summit, another piece of theatre involving the Kashmiris is being enacted. General Musharraf in a recent press conference expressed his resolve to consult Kashmiris, before going to India. This was in stark contrast to the earlier assertions wherein the APHC was almost synonymous with the Kashmiris.

The definition of Kashmiris has been broadened for the purpose of the theatre. The General did invite Kashmiris. The Pakistan unit of the APHC, and  some other Kashmiris around the globe have been invited to confer with the General. And what does the APHC  'Srinagar' have to say about it? Mum is the word.

The same APHC indulged in blustery and taunted, mocked and jeered at Mr. K.C. Pant for collecting an unrepresentative crowd. The crowd collected by Mr. Pant was at least present in Kashmir.

Time For A Rethink

The APHC has to rethink its priorities. It has to make up its mind, whether it is pro-India, pro-Pakistan, anti-India or pro-Kashmir. It has to recognise that Pakistan has international compulsions and its own interests which unfortunately do not coincide with the interests of the Kashmiris. A tiny minority may subscribe to Pakistani advocacy on Kashmir, but an overwhelming majority of Kashmiris would want the Kashmiris pleading their own case. There is a lurking danger, that the two powers might draw up the contours of a solution, and the Kashmiris may be saddled with a Hobson's choice. It is too early to call Pakistan an adversary but clash of interest does not fit Pakistan in the category of a friend either.

(The writer is the son of Abdul Gani Lone, Chairman of the J&K People's Conference, and son-in-law of the JKLF leader, Amanullah Khan. These are his personal views.)