...and his critics. So much of hai-tauba over what Advani said about Jinnah and Ayodhya and what he should or not have said, but what did he say? And what are his critics going on about? M 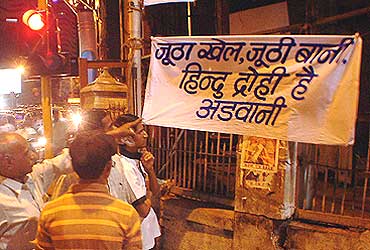 June 6: On return to India, when asked about the furore his remarks had created in the Sangh Parivar: It was the most memorable and unforgettable week of my life. I went to Jinnah's mausoleum and over there I just made a mention of him without referring to any text. I heard that there was a lot of controversy over it. I have no objections to the debate. I want such debates to take place. [Perhaps now's the time for the BJP chief to shift the debate to who was responsible for Partition and what Secularism means and results in, as well.]

June 5, He was prompt with his clarification about the context in which he said what he said about Jinnah.

June 4 Remarks in the visitors' book at the Jinnah mausoleum): "There are many people who leave an irreversible stamp on history. But there are few who actually create history. Qaed-e-Azam Mohammed Ali Jinnah was one such rare individual. In his early years, leading luminary of freedom struggle Sarojini Naidu described Jinnah as an ambassador of Hindu-Muslim unity. His address to the Constituent Assembly of Pakistan on August 11, 1947 is really a classic and a forceful espousal of a secular state in which every citizen would be free to follow his own religion. The State shall make no distinction between the citizens on the grounds of faith. My respectful homage to this great man"

Later when speaking to the press, he read out the above and added: I believe my visit here (at Jinnah's mausoleum) will prove to be a milestone in relations between the two countries.

On May 31, at a news conference on arrival in Islamabad he was asked about December 6, 1992 when the Babri Masjid was demolished in his presence, to which he answered: "After that incident I had written in The Indian Express where I had said that it was the saddest day of my life"

On June 2, addressing a function organised by SAFMA, he went on to describe Partition and creation of Pakistan as

"unalterable reality of history" and said he made this statement because:

"There are still some misconceptions and false propaganda about what the BJP thinks of Pakistan. The propaganda has no legs to stand(on) now because it is the BJP-led NDA government that kick-started the peace process and continued it for the six years it was in office. Even now when we are in the Opposition, we have been supporting it equally vigorously. Both Indians and Pakistanis have to recognise and respect each other’s desire for sovereignty, security, prosperity, unity and territorial integrity of their respective countries. No solution to any of the outstanding issues between India and Pakistan, including the issue of Jammu and Kashmir, can work if it erodes the sovereignty, security, unity and territorial integrity of the two countries.

Ram Madhav, spokesman, RSS:
Ideological questions are involoved here and it is not possible for the Sangh to compromise on them. They (Advani's remarks on Ayodhya and Jinnah in Pakistan) should be reviewed.

spokesman, Congress:
It is truly ironic and astounding that Advani considers Jinnah secular. Perhaps Advani would like to explain to the nation the new definition of secularism. For Advani, as for Jinnah, as indeed for Veer Savarkar, secularism can mean a two-nation theory. Jinnah had demanded separate electorate on the basis of religion and if it was this secularism it can mean a division of India on religious line which Congress always opposed. Jinnah always demanded it and Advani now supports.Advani desires Jinnah's brand of secularism in India.

leader, CPI(M):
It does not mean anything. He was there (at Ayodhya) when the Masjid was being demolished. Three of them were present there of whom he (Advani) was one. Did he utter such words of praise by visiting Pakistan during the demolition of the mosque. Now what is he talking about? These people have no principles, no morality. He will be properly judged and condemned by the people of this country.

Abdul Hameed Nomani, spokesman Jamiat Ulama-e-Hind:
There is no change in Advani. He is still an RSS man. He has been giving such statements on Babri masjid regularly. There is nothing new in it. We will take him seriously if he takes some meaningful steps in finding the solution of the problem of Ayodhya. He is not doing that. We believe that Jinnah was communal. His two-nation theory was so destructive that Muslims in the subcontinent are still bearing the burnt of it. Muslims got divided among three countries (India, Pakistan and Bangladesh). What can be more destructive than that?

Mohammad Sajjad, historian, Aligarh Muslim University:
Advani is trying to step into the shoes of former prime minister Atal Bihari Vajpayee, who had a liberal image and thus became the consensus candidate to lead the coalition NDA government. Now that Vajpayee's political career seems to be ending, Advani is trying to make himself more acceptable to the electorate so that he can become a prime ministerial candidate. It is just an image building exercise. I will call it a mask because this is Hindutva's old strategy of confusing people and retracting from statements. Next day he may something else. That is how their politics work

leader, JD-U:
I salute Advani for giving such a courageous statement... He has uttered the factually correct thing in a particular context quoting from his (Jinnah's) speech and there is no point raising protest over it.

Advani is throwing dust in the eyes of the people of the country and distorting history. How can Jinnah, who put forth the two-nation theory, be termed a secular man? Jinnah was responsible for the killing of 10 lakh Hindus in Pakistan. There is no Hindu who does not know that Pakistan was formed because of Jinnah and Advani did the unthinkable by paying floral tribute to him. The era of Atal and Advani is over and the Sangh Parivar will now surely decide the new direction for BJP. The question is about who will form national policies. Surely, it cannot be just Atal (Atal Bihari Vajpayee) and Advani. If he (Advani) feels free to make such statements, that he is the ‘Lord of all I survey', then his survival in politics could also prove to be difficult. To make statements like these on Pakistani soil is a matter of concern for our nation, especially for Hindus.

Pakistan is not an established fact, Akhand Bharat is. If the Berlin Wall could come down, Akhand Bharat is also a possibility. (On Advani calling Pakistan an established fact of history). Advani owes the nation a reply, and it has to come from his conscience. He should know that the earth, which rotates around its axis, also has to revolve around the sun. Similarly, he is also bound to the Sangh Parivar.

As for Ayodhya, and Advani's characterising of it as the saddest day of his life: To make statements like these on Pakistani soil is a matter of concern for our nation, especially for Hindus...such a statement is an insult to Hindus. Why did he take out the Rath Yatra if he now feels this way? Advani was at the forefront of the Ramjanmabhoomi campaign and present on the spot when the disputed structure was demolished. The slogan of his yatra was `Mandir wahin banayenge' (We will build the temple at that very spot).

It is shameful for Advani to speak like this. He has betrayed the entire Hindu community. He should publicly apologise. For Advani to be expressing remorse on Pakistan soil, a country inimical to us, is an insult to the 90 crore Hindus in the country. Why had Advani led the Rath Yatra if he had not believed that the Babri Masjid was built on the ruins of the Ram temple? How can a Ram temple be built unless the disputed structure is pulled down?

international general secretary, VHP:
How can Advani describe Jinnah as an ambassador of Hindu-Muslim unity? Jinnah was a traitor, is a traitor and will remain a traitor and person glorifying him is also a traitor. No leader from India, not even from the Congress, who has visited Pakistan in the last five decades, ever visited Mr. Jinnah's mausoleum or praised him so lavishly. By doing so, Mr. Advani has insulted the feelings of 90crore Hindus. If Mr. Advani has so much affection for Pakistan and their leaders, he should stay back. Advani's name will be written in black letters in the history of India. He cannot be in the same party as the Hindutva-vadis and should immediately resign.

Jagatguru Purushottamacharya, senior member, Sriram Janmabhoomi Trust:
The Muslim appeasement being increasingly followed by the BJP, as reflected by the recent statements of Advani in Pakistan, is a serious issue and would be taken up at the Mandal's meeting in Hardwar from June 13 to 15. Advani's appreciation for the creator of Pakistan Mohammad Ali Jinnah is a cruel mockery of the sacrifices made by the freedom fighters for the country's independence. The BJP president, under a trap laid by Pakistan President Pervez Musharraf, has shed his pro-Hindutva image and started appeasing Muslims but this attitude could bring doom to the party

vice-president, BJP:
Advani is a senior leader of the party. The remarks made by the VHP and Bajrang Dal leaders regarding Advani's utterances are senseless.

spokesman, BJP:
I will not make any comment on it. Advaniji is returning tomorrow. He will meet you. I will not comment on the remarks attributed to the party president.

president, RJD:
Advani's praise of Jinnah is his natural reaction towards Pakistan's founder. All his earlier utterances against Pakistan seemed to be artificial. They (the VHP and RSS) seem to have forgotten that Advani is a Pakistani by birth. How can he speak lies at his birthplace?

senior international vice-president, VHP: A person who caused division of the country and killed so many people through direct action.., to call such a villain secular is making fun of secularism.

He (Advani) must have made the statements for Muslim appeasement and to speak good about the person (Jinnah) at his memorial. But it is an insult of Hindus on a foreign land.

spokesman, RSS
All these years, we had been taught that Jinnah was responsible for the partition of India on religious lines. The Lahore resolution, passed by the Muslim League in 1940, explicitly stated that Hindus and Muslims cannot stay together. Our cadres are not happy with Advani’s statement.To some extent, they’re angry also. Everyone should keep in mind what impact his statement would have on the cadres. People are not happy, they are angry. They will like to know in what context Advani made the statements. We’re obviously not in agreement with Advani. This is against the basic ideology of RSS. We have been of the view that Jinnah was responsible for division and partition of the country. This (statement) goes against it. If this was Jinnah's view (his secular intentions), then who was responsible for the Partition of India? We want to know what was the intention of his statement?

'A Classic Exposition Of A Secular State'