On Election Day 2006, the U.S. public didn't switch trains but simply ratified a different group of conductors. It's the same old train, on the same tracks, heading in the same direction. 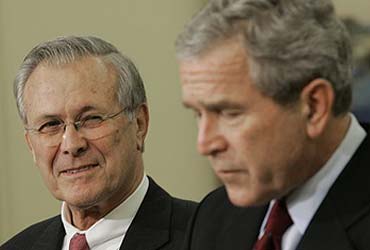 As I stood in line for coffee on the morning after election night, a Democratic Party supporter ahead of me in line said, "Thank God this country is finally switching trains."

If only that were true.

It’s the same old train, on the same tracks, heading in the same direction.

This isn’t an argument that there are never any meaningful differences between politicians; sometimes it does matter who is giving the orders on the train. But on this day after the morning-after, it’s crucial for those with a critical perspective to highlight that this train—contemporary U.S. society—is barreling forward toward disaster, no matter who’s punching tickets.

Here’s the unavoidable reality: Our train is on an unsustainable course in cultural, political, economic, and ecological terms. In a predatory corporate capitalist economy in an imperial state—a system that values the concentration of wealth and power, and devalues people—certain things are inevitable:

The train moves forward, as the vast majority of Democrats and virtually all Republicans avoid these realities. Where can such a train take us? Pick your metaphor.

If we don’t take radical action relatively soon, every ending we can imagine is likely to be brutal and violent, deadly not only for most of the world’s population but also for the non-human world. This isn’t irrational apocalypticism but a rational approach to the evidence in front of us. No one can predict how this will play out, but it will most certainly play out ugly unless we change the trajectory.

Theoretically they could, though I hear little coming from Democratic Party leaders that suggests they will pursue policies that will significantly turn from an unsustainable capitalism or a profoundly immoral empire. Instead, they talk of different strategies and tactics for managing those systems.

But, for the sake of argument, let’s assume that Democratic Party rule could slow down the train and buy us more time. If nothing is done to change the direction of the train, the end remains the same. So, the important question is, what can we do with that time—not off in an abstract future, but now?

The small amount of time we might gain will be meaningful only if we confront the harsh reality that the systems that shape our world—capitalism and empire, rooted in white supremacy and patriarchy—are fundamentally bankrupt and indefensible, yet deeply rooted in our culture.

When I make this point, I’m often told by liberals and progressives that I’m not being realistic, that ordinary people won’t listen to such analysis. That’s not my experience. When I have tried to articulate this worldview in plain language in recent political talks, I have found that a growing number of people not only will listen but are hungry for such honesty.

Of course not everyone agrees—not anywhere near the number needed for a mass movement right now, and certainly not a majority—but one wouldn’t expect that in this affluent society in which many people are still insulated from the consequences of these systems. But more and more people, from many sectors of society, are facing these realities, and we are searching for a community in which to confront this together.

Our political work should focus on connecting with people on common ground, and then working to shape a radically new vision of justice and sustainability. The time for that is now; the direction and speed of the train dictate that we not put it off any longer. It’s time to dig in for what one writer has dubbed "the long emergency."

I think that in the two years to come before the presidential election, pressing this kind of analysis is the crucial political work for those committed to left/feminist/antiracist values and progressive politics. Rather than fussing about how to persuade Nancy Pelosi and Howard Dean of the need for radical action, let’s take that message to ordinary people, who are more likely to listen.

This isn’t about who can be most radical for the sake of being radical—it’s about whether we can be realistic. Such an approach cannot promise political transformation in the short-term, but I believe it is the only hope for our future.

Robert Jensen is a journalism professor at the University of Texas at Austin and a board member of the Third Coast Activist Resource Center.. He is the author of The Heart of Whiteness: Race, Racism, and White Privilege and Citizens of the Empire: The Struggle to Claim Our Humanity (City Lights Books).  .