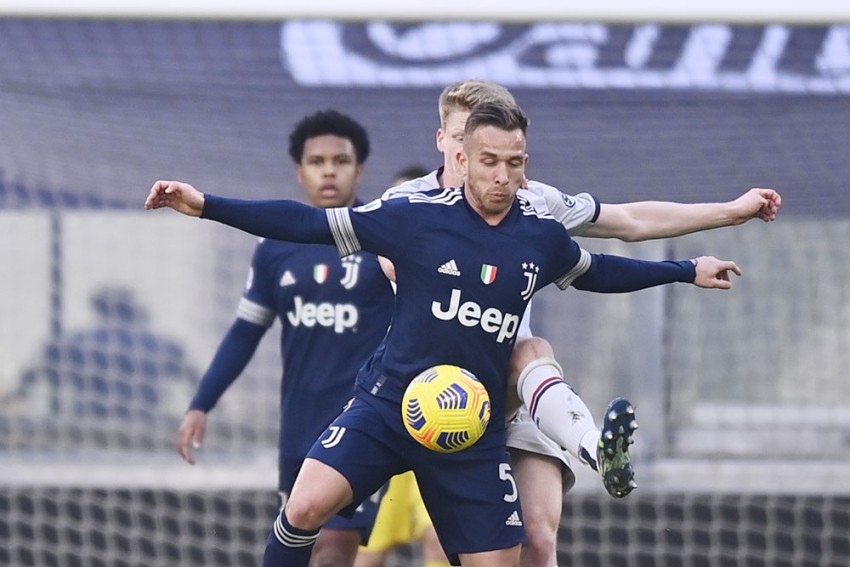 Juventus' Arthur goes for the ball during their Serie A match against Bologna at the Allianz Stadium in Turin, Italy
Fabio Ferrari/LaPresse via AP
Stats Perform 2021-01-24T20:02:09+05:30 Juventus 2-0 Bologna: Arthur Opens His Account As Serie A Champions Go Fourth 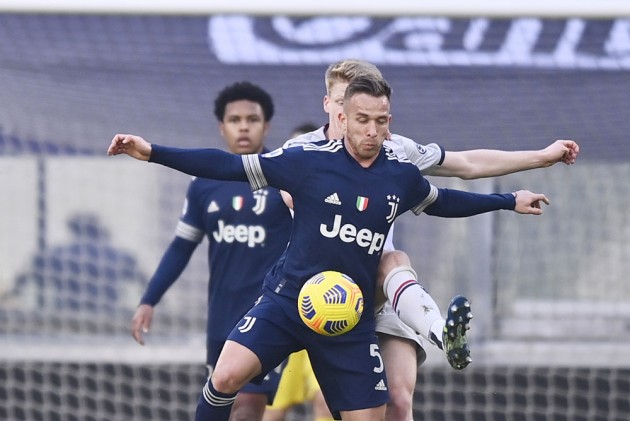 Arthur scored his first goal for Juventus as the defending champions beat Bologna 2-0 to go fourth in Serie A. (More Football News)

Juve claimed their first trophy under boss Andrea Pirlo with a Supercoppa Italiana victory over Napoli in midweek and got their title bid back on track at Allianz Stadium on Sunday.

Juve, beaten by Inter last weekend, were not at their best but although Bologna had their chances, they are now without a win over the Bianconeri in 19 attempts.

Skorupski produced a fine double save to prevent Juve from increasing their advantage, using his feet to deny Federico Bernardeschi from close range after palming away a strike from Cristiano Ronaldo.

Juan Cuadrado fired wastefully off target before Roberto Soriano went close to equalising late in the first half with a shot from inside the penalty area that flashed wide.

A fine reflex save from Wojciech Szczesny prevented Cuadrado's header from gifting Bologna an own goal early in the second half and the Juve keeper once again had to be alert keep out Riccardo Orsolini's left-footed strike.

Bologna were made to pay for their profligacy when an unmarked McKennie nodded in Cuadrado's corner 19 minutes from time.

Skorupski denied McKennie a quickfire double with a great reaction save before preventing Alvaro Morata from adding a third goal at his near post.

The busy Skorupski beat away Adrien Rabiot's left-footed shot and saved a powerful Ronaldo strike as Juve saw out a comfortable win.

Pirlo called for Juve to be more consistent ahead of the game and this was certainly a start, although they were not particularly convincing.

Although more clinical opponents would have capitalised on what was at times casual defending, the champions have now kept back-to-back clean sheets and this was just the fourth time they have not conceded in Serie A this season.

It has been a good weekend for Juve after Milan were soundly beaten at home by Atalanta and Inter drew at Udinese on Saturday.

United States midfielder McKennie put in a big shift and was rewarded with his fourth goal of the season. Skorupski somehow prevented him from claiming a double and McKennie had five shots, and three key passes – no player on the pitch had more in either category.

The usually ruthless Ronaldo cut a frustrated figure as he failed to add to his tally of 20 goals for the season. After the Czech Republic Football Association this week claimed the Portugal forward did not break Josef Bican's all-time goalscoring record at Napoli, Ronaldo was unable to add to his incredible haul of 760 competitive goals.

Juve will be expected to get past SPAL and reach the semi-finals of the Coppa Italia on Wednesday, while Bologna are at home to leaders Milan in Serie A on Saturday.