The win helped Mohun Bagan regain lead in the I-League 2019-20 points table with 13 points, while Indian Arrows remain at the bottom with four 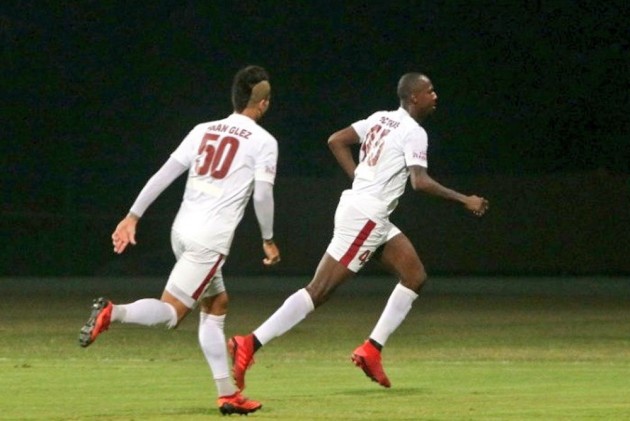 Mohun Bagan registered a 1-0 victory over All India Football Federations (AIFF) developmental side Indian Arrows at the Kalyani Municipality Stadium on Thursday as Daniel Cyrus scored the solitary goal of the match in the 19th minute. (More Football News)

Kibu Vicuna stuck to his winning formula and named an unchanged line-up from Mohun Bagan's thoroughly impressive win in Srinagar.

Arrows head coach Shanmugam Venkatesh made just the one change, opting to field Harpreet Singh in a four-man defence, while Aman Chetri made way for him, leaving Manvir Singh as the sole striker up front.

Buoyed by the 8,538-strong Green and Maroons faithful at the Kalyani Stadium, Mohun Bagan were firmly in the driving seat in the opening stages of the match. The first goal-bound opportunity fell in the way of the hosts, when in the 12th minute, a cross-field delivery by Fran Morante found Papa Diawara completely unmarked, and despite having a free header on goal, couldn't capitalise.

Mohun Bagan, at this stage, were completely dictating the game, as the Arrows struggled for possession, finding themselves restricted to their own half.

The deadlock was broken in the 19th minute, when a Nongdamba Naorem shot ricocheted off Akash Mishra's back, and with the ball still in the air, Daniel Cyrus unleashed a picturesque left-footed volley about 25 yards from goal, leaving Lalbiakhlua Jongte in the Arrows goal completely stranded as Vicuna's men took the lead.

The Green and Maroon brigade kept turning on the style, this time through VP Suhair. In the 24th minute, he made inroads into the eighteen-yard box down the right through some smart footwork and after cutting in to his left, pulled the trigger with his weaker left foot, only to be denied by a great save from Jongte.

Coach Venkatesh was forced into making an early substitution in the 29th minute, seemingly frustrated with how the game was unfolding. He took Harpreet Singh off, and brought on Aman Chetri, thus reverting to his previously tested 4-3-3. The Arrows, despite stringing passes together in the final third following Chetri's introduction, struggled to pose any real threat as Mohun Bagan went in at half-time with a goal to their good.

Mohun Bagan almost doubled their lead following the break. In the 48th minute, a Joseba Beitia corner was met by a towering Fran Gonzales, but his header hit the woodwork.

Much against the run of play, the Arrows almost found an equaliser, when RV Hormipan got to the end of an Ayush Adhikari set-piece, but his header glanced inches across the far post, coming agonisingly close to restoring parity in the game.

In the 70th minute, it was Jongte who gave away the ball with a poor pass, which was latched onto by Beitia, who fed Diawara through and with just Akash Mishra to beat, he got his shot away early, which sailed wide off the post by a fraction.

The referee blew for full-time, signalling a fourth consecutive victory for Kibu Vicuna's side, as Mohun Bagan went back to the top of the Hero I-League standings, with 13 points while the Indian Arrows remain at the bottom, with 4 points.

For his outstanding strike and overall polished display, Cyrus walked away a happy man with the Hero of the Match accolade.