Barring the stylish Hyderabadi (100), the Indians produced a spineless batting performance to be bowled out for 362. But the hosts decided against enforcing the follow-on and raced to 113-4 to take an overall lead of 332 runs and raised hopes of a wi 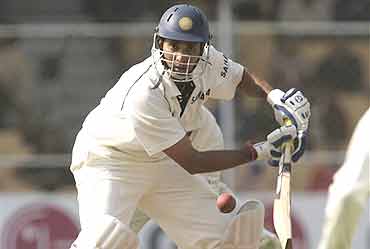 India conceded a huge first innings lead to the West Indies after suffering an inexplicable middle order collapse with the exception of centurion V.V.S. Laxman in the third Test on Sunday.

The Indians produced a spineless batting performance to be bowled out for 362 but the hosts decided against enforcing the follow-on and raced to 113 for four in their second knock to close the fourth day's play with an overall lead of 332 runs.

Daren Ganga, the first innings centurion, was batting on 41 with Dwayne Bravo on nine at the other end at stumps with the hope of pulling off a win in the match that seemed headed towards a dreary draw at the Warner Park stadium.

India owed their total to Laxman who smashed his 10th Test century and some heroic resistance from its tailenders, Anil Kumble (43), Harbhajan Singh (38) and Munaf Patel (13).

Laxman came to the visitors' rescue after Jerome Taylor (3-117) ripped open their batting in the morning with three wickets in five balls.

The Hyderabadi's knock came off 231 balls and was spread over nearly six hours.

Laxman received support from wicketkeeper-batsman Mahendra Singh Dhoni (29) and Kumble (43) with whom he added 61 and 77 runs for the sixth and seventh wickets respectively.

Yet, at 297 for 7, India were still 85 runs from making the West Indies bat again, when the tailenders unleashed their fine resistance.

Harbhajan and Munaf batted together for 17 overs and put on 47 runs before the latter offered a catch to gully.

Harbhajan played a clever cameo, never hesitating to strike mighty blows even to the best of home bowlers.

Harbhajan once took Taylor by the scruff of his neck and thrashed four fours in an over, including a sumptuous flick off his legs which would have done a Viv Richards proud.

The West Indies did not enforce the follow-on even after limiting India within the distance of the mark as Brian Lara did not want to risk his overworked bowlers to yet another stint in the scorching heat.

Lara was practically left with two frontline bowlers after Pedro Collins pulled up with a strained groin muscle in the middle of his 30th over.

Laxman had looked in sublime touch when he smashed Taylor for three fours in an over to move quickly towards his century and as Kumble also took a heavy toll of Collins from the other end, the Indians appeared on ascendancy.

Laxman steered Corey Collymore (3-63) down to third man to complete his 10th Test century in his 75th match.

His innings came to an end when he left his bat hanging for an edge off Collins to wicketkeeper Denesh Ramdin. In all, he batted for 357 minutes and hit 15 fours from 256 balls.

Kumble struck a fierce square cut off Collymore but then injudiciously chose to go for a hook which was finely held by Collins at fine leg.

Kumble batted for nearly a hour and half and his 43 from 61 balls included eight fours.

West Indies began their second innings aggressively before Kumble pulled things back with the scalps of Lara (19) and Shivnarine Chanderpaul (11).

Lara had struck the leg-spinner for two massive sixes when he dashed down the track wildly and was stumped by miles.

Sreesanth picked up the other two wickets when he had Chris Gayle (3) caught down the legside and then Ramnaresh Sarwan (23) sparred a catch in the slip cordon.