Five years back, Mulayam Singh's image was seen as a major contributor to Mayawati’s success. Like any good denize, Mayawati seems to have returned the favour in good measure... 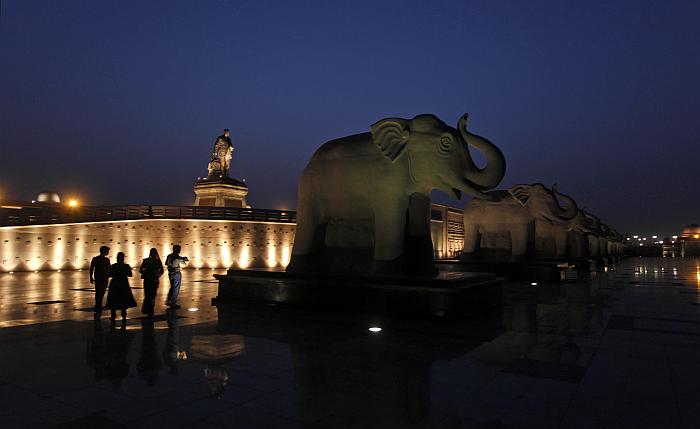 The statues took much less time to uncover than they had taken to hide. The day after the code of conduct monitoring elections lapsed, the elephants were uncovered and the statues of Mayawati were hosed clean and made visible again. It might be some time before they receive such attention again. No more state resources might go towards the maintenance of these sites at least for the next five years but they will be now a permanent item of election expedition. Every election, the dozens of elephants will have to be encased in enormous plastic shrouds and the statues in wooden casing. It will never be clear what impact this exercise had on the results. What had become clear much before the results was that the bicycle had caught the imagination of the people and the elephants, covered or uncovered, would have made little difference.

The mood in Lucknow was remarkably different from five years ago. Then the widespread public perception of the SP was that of a corrupt, sleazy party which had substituted governance by muscle power. Real-estate grabbing by cronies and goondagardi was perceived as the main features of the SP administration. An ever increasing number of family members had begun featuring as movers and shakers. Celebrities and socialites of the filmi kind were seen as its public face. Its claims of being secular were seen as cynical posturing when it embraced arch political foe Kalyan Singh. Mulayam Singh's image was seen as a major contributor to Mayawati’s success. 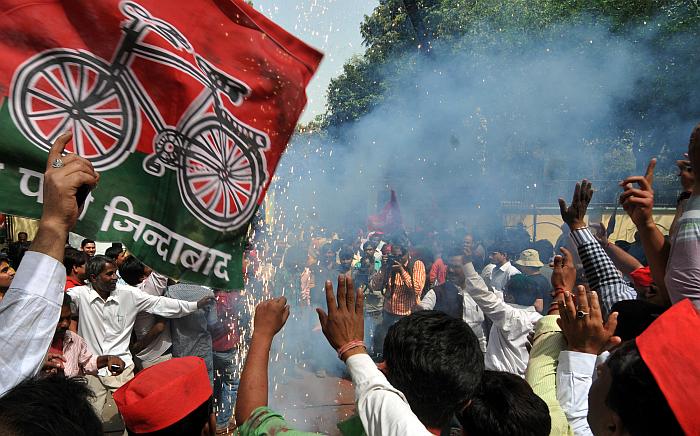 Like any good Lakhnavi, Mayawati seems to have returned the favour to the SP in good measure by prodding the electorate into a verdict that would ensure that on no account could she return to power in 2012. The last BSP government, like its earlier avatars, was also seen as corrupt but corruption seemed to have taken on horrifying dimensions, not just of scale. One particular scam has left in its trail a series of murders of public servants, sometimes disguised as suicides.

Mayawati’s obsession with herself had gone beyond the amusing. Her existing statues were replaced when she fancied larger replicas of herself or when she imagined herself with different accessories or in a different medium, like metal instead of stone. More and more acres of fertile land were made to look like an enormous arid set worthy to stage a pharaonic fantasy in. Lessons in Dalit history were reduced to a farce when her parents joined the pantheon of icons. Political discussions in Lucknow were most often reduced to discussions of disenchantment of the bureaucracy and horrified relating of examples of her arrogant behaviour and her impolite speech. Whispered stories of personal corruption multiplied by the week. The image of her beaming, draped in gargantuan garland of thousand rupee notes is an image that typified her term. 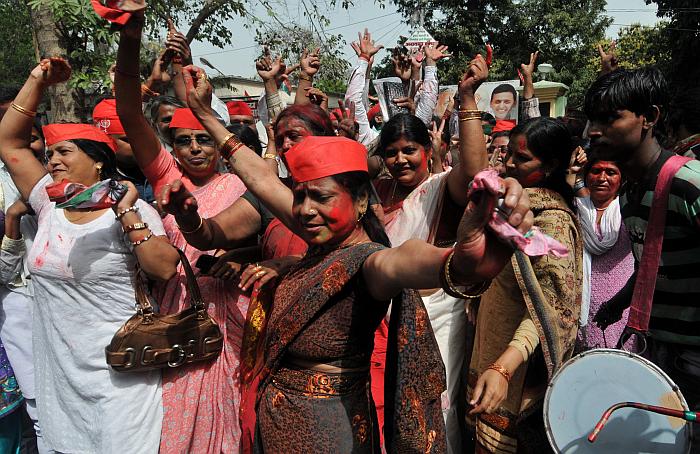 The extent of the SPs victory has surprised us as much as it has the party itself. The party has obviously succeeded in reinventing itself to great extent. It symbolically distanced itself from one notorious candidate. It took on the questions of its image as a party of lumpens head-on with constant assurances that there would be no more compromises on law and order, something that we all wanted to hear. The projection of Akhilesh Yadav as the face to go with the new image also worked. The juxtaposition of images of the new leader was cleverly managed. Representing Gen X, he changed his party’s archaic views on education in English and on the use of computers without straying too far from the son-of-the-soil image of his father. People were willing to believe the image of mild mannered, grounded yet forward looking young leader, who despite his education abroad was too shy to speak English.

As a crucial aside to this new image is the absence of another extremely familiar face which has been extremely welcome. Amar Singh who till the not too distant past was the most visible and over-articulate face of the SP was absent from the scene. His absence was most marked in the innumerable television studios. Without him, the SP sounds like almost an unrecognisable party. Can you imagine how he would have sounded had he been the party spokesman reacting to this enormous victory?

In the meanwhile, chinks in the SP's reinvention of itself have already begun to show within hours of victory. There had been reports of muscle-flexing on the streets by the SP cadre soon after the broadcast of the exit polls. More serious violence has been reported from a number of places following the election results, ending in deaths, including that of a child. Memories of earlier SP rule come back immediately and one therefore hopes that these are only hiccoughs.