In an unprecedented order, the Supreme Court had issued the arrest warrant against Justice Karnan to ensure his presence before it on March 31 in a contempt case. 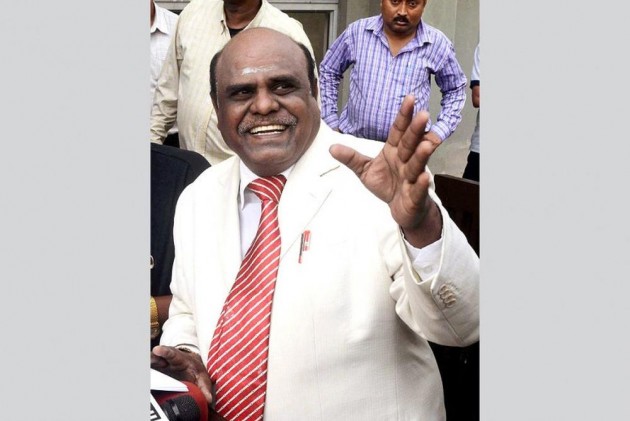 After close to 100 cops landed up at his doorstep to issue a bailable warrant issued by the Supreme Court, Justice Karnan has now threatened to sue the apex court.

According to an NDTV report, the Calcutta HC Justice told the news channel that he rejects the warrant and will demand a sum of Rs 14 crore as compensation from the courts for “disturbing his mind and disturbing his social life”.

The DGP visited the residence of Justice Karnan in New Town area here along with Kolkata Police Commissioner Rajeev Kumar and DIG (CID) Rajesh Kumar and handed him over the warrant.

Reports mention that close to 100 policemen arrived with the warrant at Karnan's residence.

"The DGP handed over the bailable warrant to Justice Karnan at his New Town residence this morning," a senior official of the state police force said.

The large police team was posted outside Karnan's residence when the three senior police officials visited the place.

In an unprecedented order, the Supreme Court had issued the arrest warrant against Justice Karnan to ensure his presence before it on March 31 in a contempt case.

Hitting back at the apex court, Justice Karnan had stated that they have "no locus standi" to issue a bailable warrant against a sitting judge and alleged that he was being targeted for being a dalit.

Justice Karnan also issued an 'order' of registration of a case under Schedule Caste and Scheduled Tribe (Prevention of Atrocities) Act, 1989 against Chief Justice of India Justice J S Khehar and six other judges.