The passenger fought back and fell to the ground in the melee. 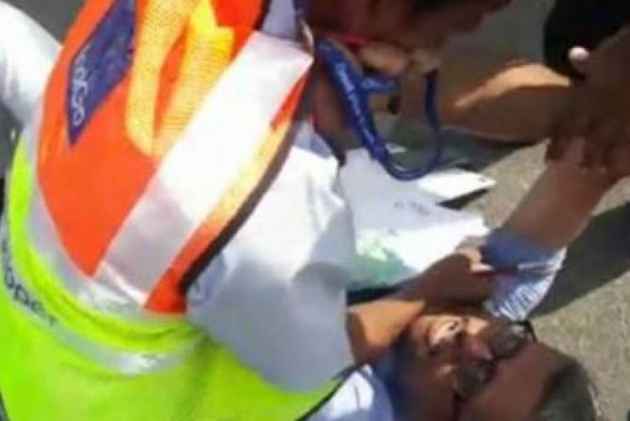 In a replay of the infamous United Airlines incident where a passenger was brutally assaulted, a video surfaced today showing an IndiGo staff assaulting a traveller at the Delhi airport.

In the video, a passenger is first seen being stopped from entering a coach, then pulled back by a ground staff. Another airline employee is seen restraining the traveller.

The passenger fought back and fell to the ground in the melee.

The incident happened on October 15.

Minister of State for Civil Aviation Jayant Sinha condemned the incident in a series of tweets, and said the government has sought a report from the airline.

"I was standing in the shade of a plane when a ground staff started shouting at me in a very rude manner. I asked him why don't you arrange the third bus for which we are waiting. Meanwhile, when the bus came two people said let's teach him a lesson and one of them pulled me out of the bus," the passenger, identified as Rajeev Katiyal, told a telvision channel.

"IndiGo passenger incident from Oct 15 is deplorable and unfortunate. Passenger safety and security is our top-most priority. MoCA (Ministry of Civil Aviation) has already asked for a detailed report from Indigo by tomorrow," Sinha tweeted.

The minister said he will also meet the passenger.

"We hope the passenger will file a criminal complaint. This will enable us to take appropriate action," he said in another tweet.

A Delhi police official said they received a call from the police control room about the incident but no one filed a complaint.

"There was altercation between IndiGo staff, and passenger, Rajeev Katiyal, due to misunderstanding. The matter was amicably resolved," said DCP IGI, Sanjay Bhatia.

An IndiGo statemnet quoted Ghosh as saying he had apologised to the passenger.

"I acknowledge the unpleasant experience our passenger went through, while engaging with our staff at Delhi airport. My personal apologies as this does not reflect our culture. I had personally spoken to the passenger and asked for an apology," a statement from IndiGo quoted Ghosh.

IndiGo President also said the the airline had inquired into the incident and action was taken against the staff, he said without specifying was measure was taken.

"Any act that compromises the dignity of either (passenger or the staff) is of a serious concern to us. Under the code of conduct violation, this incident was investigated and stern action was taken against the staff. Once again my personal and sincere apologies to the affected passenger," the statement added.

Meanwhile, according to media reports, Montu Kalra, an IndiGO ground staff, who was said to have shot the video, was sacked after the incident.

Former Air India CMD Ashwani Lohani, who now heads the Railway Board, waded into the row and hit out at IndiGo for the "disgusting" and "inhuman" act.

He added, "The subsequent action of the airline in sacking the whistleblower is the icing on the cake of gross misconduct."

Earlier this year a passenger, Dr David Dao, was dragged out of a United Airlines plane at Chicago's O'Hare International Airport as the airline needed to free up seats for flying crew members, triggering an outrage, with passengers threatening to boycott the airline.

A video showed Dao bleeding profusely from his mouth after three airport security officials grappled with him.

In India, the aviation ministry unveiled rules for a no-fly list for unruly passengers that imposed a ban on flying from three months a lifetime. However, the rules do not deal with misconduct by airline staff.