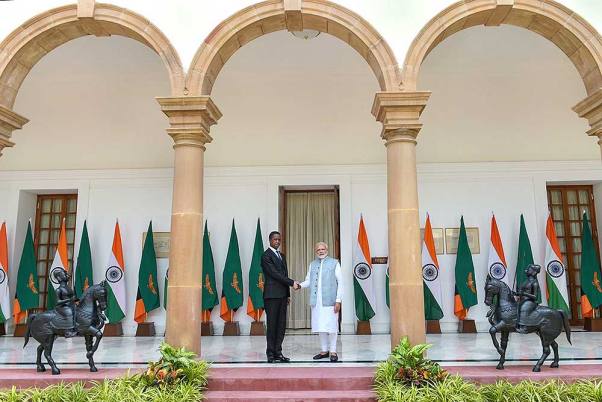 The two leaders also deliberated upon enhancing trade and investment, as well as deepening development cooperation.

Prime Minister Modi, at a joint press statement with President Lungu, said as a reliable partner in development cooperation, India has been sharing its developmental experiences with Zambia.

He noted the progress made in projects related with health, power generation as well as easing traffic in Zambian capital Lusaka, with cooperation from India.

Modi said both the countries will increase their participation in the fields of healthcare, tourism, agriculture, food processing and mining.

After the delegation-level talks, MoUs were signed between the two sides on cooperation in the field of geology and mineral resources, defence, and arts and culture.

A Memorandum of Understanding was signed between between Foreign Service Institute of India and Zambian Institute of Diplomacy and International Studies.

Also, two agreements were inked on 'E-VBAB Network Project' (e-education) as well as between Election Commission of India and Electoral Commission of Zambia.

Modi said the Indian government will cooperate in setting up an Incubation Centre in Zambia.

India will also provide 100 solar irrigation pumps to boost agriculture and send 1,000 tonnes of rice as well as 100 tonnes of milk powder to Zambia, he said.

Zambia is a country rich in mineral wealth and among other minerals, India takes large quantities of copper from the African country, Modi said.

Underlining that an important MOU has been signed on defence cooperation, Modi said it will increase exchanges in the field of defence.

Indian military and air-force training teams will be deployed in Zambia to assist in enhancing the capabilities of the armed forces of that country, the prime minister said, adding India will also deploy five fire tenders in Zambia Air force bases.

Lungu arrived in New Delhi on Tuesday on a three-day visit to India.