The breezy narration makes the novella good to be lapped up without feeling the burden of the underlying issues in a very contemporary Russia. 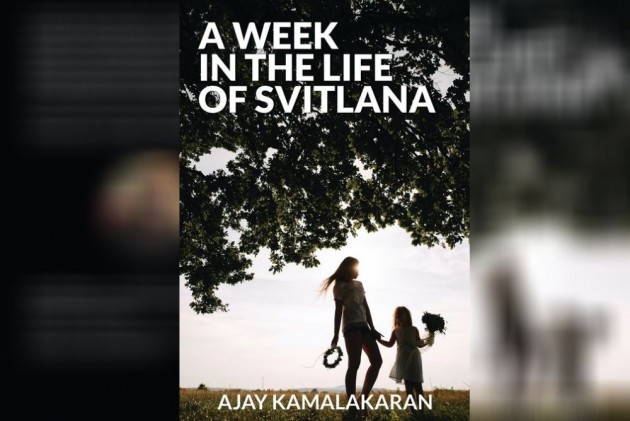 Title: A Week in the Life of Svitlana

It is common knowledge that none has felt the mortification brought about by the collapse of the USSR as deeply as Vladimir Putin, who pledged to put the Russian Federation, which still retains the vestiges of the military and nuclear might of the USSR, back on the global stage.

With its immodest geopolitical ambitions, Russia has made decisive political interventions and military aggressions on its close neighbours even while putting down pro-democracy protests within the country’s own boundaries.

In this context of constant chaos, what about the day-to-day lives of ordinary citizens in Putin’s Russia and its neighbouring countries? We get a peep into this in the novella A Week in the Life of Svitlana, written by author and columnist Ajay Kamalakaran. The story is set in Moscow in the autumn of 2015, following the 2014 Russian annexation of Crimea and offers a quick brush over the daily din, hopes, heartbreak and quick emotional recoveries of a 35-year-old Ukrainian woman Svitlana Khristenko. The twice-divorced, single parent of a four-year-old girl, Svitlana tries to find her space in terms of livelihood and stable relationships in Moscow. As a double passport holder -- of Ukraine and Russia -- the protagonist is a virtual battleground through whom the socio-economic and political fault lines of her contesting national loyalties crisscross. Over and above everything, we see her longing to escape her unstable and stressful circumstances by beginning a new upper middle-class life somewhere in the free and prosperous Western Europe.

Kamalakaran’s sympathetic treatment of Svitlana comes out in the way she connects the depreciation of the rouble and her fading good looks to her sense of urgency in finding a suitable husband, in the way her motherly sentiments come into play even while she considers prospective suitors -- wondering whether they would make good stepfathers to Nelle, her strong articulation of her political views with the right audiences and her choosing not to speak up on other occasions in order not to jeopardise her daughter’s life. She also knows her realistic chance at marriage may lie in finding a wealthy older Russian rather than a European, due to her lack of proficiency in English.

The author packs gentle humour in Svitlana’s reflections and curiosities about the new trends emerging in Moscow with the opening up of the economy, even as she navigates her life through the treacherous landscape of propaganda news, street vigilantism and street crime, arrogance of the nouveau riche and her encounters with urban poverty.

Misha, the boutique owner seeking to profit from the economic boom in Moscow, asks Svitlana to make use of her feminine charm to clinch business deals and intersperses his conversations with salary raise allurements, all the while sarcastically alluding to the number of hours she took off for childcare and other domestic emergencies. Lana has to deal with two house repair emergencies in the course of the week, attend to emergency calls from her mother in Ukraine as the authorities have suddenly frozen her bank account and to reckon with the sudden suspension of flights between Russia and Ukraine due to fresh escalation of tensions.

The story starts on a Monday morning when Svitlana joins the rush hour crowd at Moscow’s underground metro. A Week packs plenty of drama in its pages as the impulsive, superstitious protagonist eventually quits her job by the weekend and rides an emotional rollercoaster with regard to a prospective suitor who smashes her hopes. But there is an almost immediate reprieve as a French guy leaves his number with her; the ending pointing to the resilience of ordinary Moscovites.

Each time Svitlana navigates the city on foot, the important landmarks dotting Moscow come alive with interesting snippets of information. The author also pans his narration over the different ethnicities in Moscow, who have come in search of jobs as part of their respective country’s accession to the Eurasian Economic Union agreement. The hierarchy among the various diaspora and the prejudices against each that get amplified by blogging sites are delved into. Kamalakaran delineates the differing mindsets and temperaments of Svitlana’s ex-husbands. Despite previous bad experiences with men, the women in the novella, Svitlana and Veronika, her friend, counsellor and drinking partner, do not consider a future without a man.

Svitlana at 35 years in the year 2015 means she lived her childhood in Soviet times and was 10 during USSR’s disintegration. Using the technique of throwbacks and memories, the entire sweep of the troubled history over three and a half decades is effortlessly spun into A Week. The breezy narration makes the novella good to be lapped up without feeling the burden of the underlying issues in a very contemporary Russia.