Deendayal has become the political brand equity for the BJP that Gandhi was for the Congress Party. 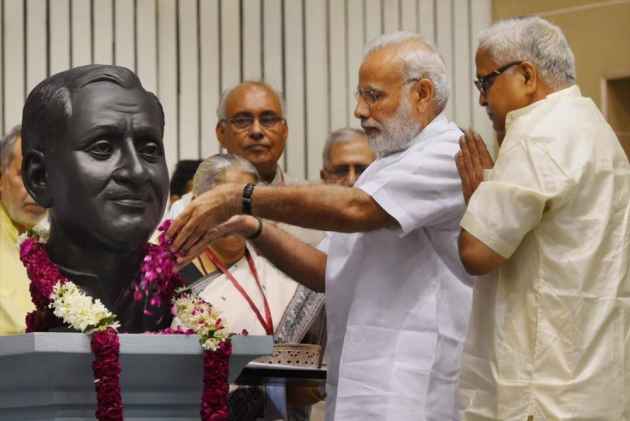 Pandit Deendayal Upadhyaya has come to occupy the central place in political discourse ever since Narendra Modi government took office in May 2014.  On September 25, 2017, the BJP will be celebrating the grand finale of the year-long centenary of Deendayal’s birth centenary. There is a proposal to extend by another year, the programmes and projects associated with the centenary year.  Deendayal has become the political brand equity for the BJP that Gandhi was for the Congress Party.

There is a proposal to extend by another year, the programmes and projects associated with the centenary year.  Deendayal has become the political brand equity for the BJP that Gandhi was for the Congress Party.

What is the mesmeric touch that Deendayal provides the BJP that no other Indian leader was able to impart for the party? Is he a great vote catcher, is his memory so appealing that he could convey a special ideological veneer for the BJP that the invocation of Gandhi gave for the Congress? What is the ideological imagery that Deendayal evokes in BJP supporters when his name is taken to articulate the special and alternative political narrative that the BJP wants to popularize? These questions are relevant as the Deendayal centenary comes to a close and the ruling party of the day has put all its might to make the man and his philosophy a popular theme to explain the BJP orientation.

Let us face it. Deendayal and his philosophy are still not familiar to the Indian masses as compared to Gandhi, Nehru or even Dr Ambedkar. But in political tears, Deendayal holds more sway than any other leader in the present government. Integral Humanism, he propounded is the Das Capital of the BJP dispensation.  Within the BJP there were many towering personalities like Dr Syama Prasad Mukherjee, Dr Raghuvira, A B Vajpayee and many others who are held in very high esteem but no leader is revered as much as Deendayal. This is perhaps Deendayal lived a very simple, exemplary life and because he propounded an alternative economic model and a political philosophy which form the bedrock of the BJP ideological mosaic.  It is different from all other isms, it is intrinsically Indian and its approach is totally opposed to the concentration of wealth and power. It is very liberal, believes in decentralization of power and wealth, man is at its centre and in many ways very akin to Gandhian Gram Swaraj concept. It is very opposite of Capitalism, Communism, Nehruvianism and even M N Roy’s Radical Humanism. It is very close to Guruji Golwalkar’s thoughts as he expressed them in Bunch of Thoughts and Collected Works of Shri Guruji. In fact, Deendayal’s political approach is the theoretical exposition of Guruji’s agenda for the nation. This perhaps is the reason for the wide acceptance Deendayal enjoys in the Sangh ideological family.  It is well known that at every state of the formulation of Integral Humanism, Deendayal consulted Guruji Golwalkar. It was finally approved by the then Jan Sangh as its political philosophy after it was fully endorsed by the then RSS chief. Deendayal, it is said would have become RSS chief had he not been given to the BJS work. But throughout his life Deendayal lived an ideal swayamsevek, the life of an ascetic.

In fact, Deendayal’s political approach is the theoretical exposition of Guruji’s agenda for the nation. This perhaps is the reason for the wide acceptance Deendayal enjoys in the Sangh ideological family.  It is well known that at every state of the formulation of Integral Humanism, Deendayal consulted Guruji Golwalkar. It was finally approved by the then Jan Sangh as its political philosophy after it was fully endorsed by the then RSS chief. Deendayal, it is said would have become RSS chief had he not been given to the BJS work. But throughout his life Deendayal lived an ideal swayamsevek, the life of an ascetic.

He was born ordinary, lived like a commoner and died mysterious, during a train journey at night from Lucknow to Patna. His body was found on February 11, 1968, by a railway man on the track near Mughalsarai station and initially nobody recognized the dead. The police would have buried it as unidentified but for a Jana Sangh worker in the crowd that collected around the corpse yelling its “Deendayalji”. Within minutes the entire nation was sobbing over the tragedy that swamped the then second largest party in the country.

The murder still remains unresolved. Forty-nine years have passed, the party he nurtured has evolved into Bharatiya Janata Party, ideology he formulated Integral Humanism is now fifty. And from September 25, 2016 the birth centenary of Deendayal is being celebrated. He was not a fabulous man but he influenced two generations of workers because of the intensity of his passion to transform lives of ordinary Indians. The Narendra Modi government has unleashed elaborate plans to mark the occasion.

Deendayal is unarguably the most iconic personality produced by the Sangh  school of thought and his basic effort was to establish the role of ideology in electoral polity. For, he lived at a time when the distinctiveness of ideological sharpness was getting blurred in the market of political pragmatism.

The historic and political significance of the massive mandate the BJP won in 2014 is yet to be fully analysed. And the role Deendayal’s strategic formulations and theoretical compass that laid the foundation for this are aspects of focus in this Centenary. This was an occasion to recast, to reinvent the canvas on which the BJP ideological format was designed.

Already dozens of welfare projects named after him are running in states ruled by the BJP. NDA at the centre has launched some schemes and more are on the anvil as part of the celebrations. Deendayal conceived a classless, casteless and conflict-free social order. He stressed on the ancient Indian wisdom of oneness of the humankind. For him, the brotherhood of a shared, common heritage was central to political activism. He emphasised on coexistence and harmony with nature.  Not sustainable development but sustainable consumption was his advice to planners. His ideas came as a fresh breeze of soothing creativity and he inspired a generation of party leaders to create a new political system which was free from the dialectics of competition and envy. He conceptualized a third way from the inertia of Capitalism and Communism.

Ideology has something that is immutable about it. After globalisation, the fall of communism and the end of Congress party dominance in Indian polity, the BJP has become the sole ideological pole, which is essentially Indian in its approach. He shaped the party very different. His was a cadre-based mass organisation. Politics for him was a means to an end. Not an end in itself. For most BJP leaders trained under him this was the case.

Deendayal was a pioneer of many political experiments. He was the architect of the first coalition phase in Indian politics. The Samyukta Vidhayak Dal (SVD) experiments of the post-1967 election when Congress was routed in every state from Punjab to West Bengal Deendayal along with Dr. Ram Manohar Lohia worked to unite all anti-Congress parties and form alternatives in state after state. During that period Communists also joined his campaign and shared power in Bihar with the Jana Sangh. The point is, Deendayal was an innovative politician and he created a paradigm for future politicians to follow.

The 2014 victory of BJP was a clear vindication and reaffirmation of ideology in politics. All the oppositions during the poll campaign and after the formation of the new government are essentially a reiteration of the tectonic shift that has reshaped and reconstructed Indian polity. Deendayal’s idea of Antyodaya is at the centre of this policy shift that is taking place in governance. He was an advocate of less government and more governance. He believed in self-sustaining autonomous units, more power to states and decentralized and competitive federalism, solidly cemented on the cultural mosaic of our tradition, heritage and experience of the past.