From leading the rescue operations to cleaning up the flood-affected houses, the men in khaki uniform put up a brave and humane face in times of the calamity. 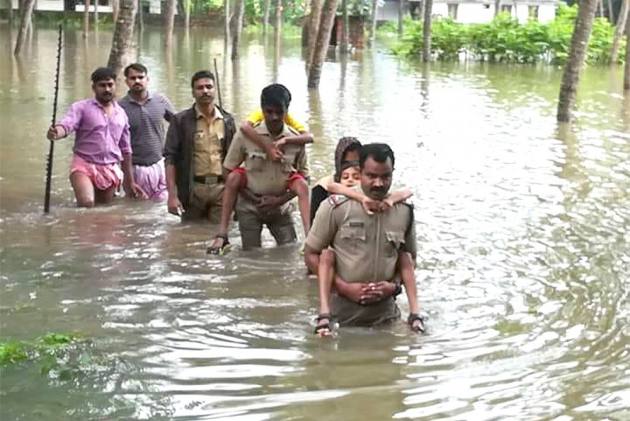 When Kerala faced its worst floods in a century, the state’s police force scripted a new tale of heroism and compassion. From leading the rescue operations to cleaning up the flood-affected houses, the men in khaki uniform put up a brave and humane face in times of the calamity.

“On 8th of August onwards, the situation of the natural calamity vis-a-vis police changed,” Kerala police chief Lokanath Behera told Outlook at the police headquarters in Thiruvananthapuram on August 20 even as he was busy coordinating the rescue operations. “We were rattled.  Police stations were unable to handle the flood of distress calls. ,” he said, pausing to take a call seeking clearance for Maharashtra Health Minister’s visit to Kerala along with medical aid to the flood-affected people. Behera instructed the caller to direct the minister and his team to the Cochin naval base, as the Nedumbassery airport was closed due to floods, or to send them to the Trivandrum airport.

“We had no order (to go by). We decided to go suo moto,” he said. “We put 15,000 policemen on rescue ops along with other officials. Men and women were added as the situation worsened, until 40,000 pairs of boots were on the ground. Most police stations were emptied of staff as the flood took precedence. We did not have helicopters, but we have local knowledge—this saved many lives," he said.

In Kochi, on the intervening night of August 7-8, Sudhesh Kumar, ADGP in charge of coastal security, happened to be handling a search-and-rescue operation after a ship had hit a boat. There was no official word till now, but he noticed the weather . “I could see what was happening…The rainfall was intense and the sea level was visibly rising,”  he told Outlook. Having been around a bit—a UN stint and a key role in setting up the NDMA—Sudhesh could recognise a coming catastrophe when he sees one. And he was seeing one.

“I informed the DGP of the rising wat­ers. He immediately made me nodal offi­cer for rescue, with the Kerala Police in the lead. We were soon joined by other forces,” he said. Within 24 hours, 400 boats were mobilised from fishermen, that became the backbone of the rescue ops. “Fishermen volunteered to help too,” he said.

In the absence of a disaster forecasting and response mechanism, local intelligence acted on its own. “We are gathering all information related to floods and rescue and reporting to the Chief Minister twice a day. We are constantly monitoring all dams in the state,” said T.K. Vinod Kumar, ADGP in charge of internal security.

When Outlook met the ADGP, he was busy on phone instructing his men to bust a specific piece of fake news related to flood that was doing rounds at the time. In times of the calamity, fake news was evidently causing headaches for the force.

Alappuzha SP, Surendran S, who led the rescue operations in the severely-affected district, told Outlook that proper strategy in rescue operations helped minimise the death toll. “Chengannur had become an island. It was tough to carry out rescue at night. Several boats were damaged. Some police men fell in the water,” said the SP. “Rescue ops were managed by available police force and other limited forces for the first two days. Difficult areas were accessed by navy personnel while the air force went to places beyond that,” he said.

As per the data provided by police on August 20, 169 teams of NDRF (with 173 boats), 6 army columns (13 Engineering Task Force and 4 Column Defence Security Force with 104 boats), 83 navy team (with 72 boats), 22 air force helicopters, 30 groups of coast guard (with with 23 boats and 12 life raft) were deployed in the rescue ops. Besides, personnel from BSF, CRPF, RAF, CISF, Tamil Nadu Fire Service, Odisha Fire Service and Kerala Fire Service were also involved in the mission. Local fishermen, who turned out to be the real heroes in the entire operation, were also involved with 514 fisheries boats.

DGP Behera, however, said the challenge for the police is not over yet. “Rehabilitation is the next big thing. Some part of rehabilitation has to be done by the police,” he said. Kerala police is also actively participating in the clean up drive in the state after the floods. “I have arranged the police orchestra to play in the relief camps to relieve people from the mental trauma,” said Behera.