Gandhi On The Auction Block

The seller of the Gandhi items now wants them back. Amidst the welter of confusion that surrounds this entire episode, one wonders what the Mahatma himself would have made of it. 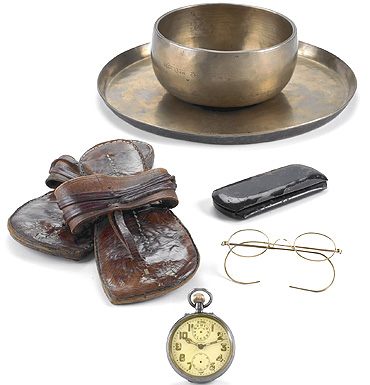 The 'Indian triumph' at the recent auction of some of Gandhi's personal effects was greeted with great cheer in the media. Ignoring the manner of its denouement, it was pronounced that 'All is well that ends well' since an Indian had purchased the items. However, thanks to the controversy generated, the seller of the items now wants them back. Amidst the welter of confusion that surrounds this entire episode, one wonders what the Mahatma himself would have made of it.

Gandhi was no stranger to auctions--even those involving his own belongings. Auctions were a common feature at the innumerable events and meetings he addressed throughout his long public life. Such auctions were often used to raise funds for the many social causes he championed over an eventful period of three decades. In every village and town he visited, Gandhi was presented with a variety of memorabilia. Ever practical, he promptly auctioned them off and spared himself the trouble of accumulating such gifts. In turn, the auctions themselves served as vehicles to raise awareness of poverty, untouchability and other social inequalities that plagued India. In challenging Indians to part with as much money as they could, Gandhi was reminding them of a collective responsibility towards their own people and society.

Gandhi did not have much that he called his own. However, this did not prevent him from lavishing what he had on others. His affectionate care for the many people whom he encountered on a daily basis is legendary. Indeed, the pairing of his gifts and their recipients was done with a refined sensibility and utmost attention to their appropriateness. The current brouhaha surrounding articles Gandhi had originally gifted to various people reminds one of a charming anecdote recounted by his long-time secretary, Pyarelal, in the 1956 BBC radio documentary, Talking of Gandhiji.

In 1931, Gandhi had visited England for an extended period to attend the Second Round Table Conference that was to discuss the political future of India. While the conference itself was a disaster, the trip was eventful for Gandhi who memorably used this opportunity to present his case for India’s freedom directly to the British people. During this trip the British Government deputed two detectives to accompany the greatest enemy of the Empire as he wandered around London.

Such forced intimacy led Gandhi to develop a fondness for the two detectives. On his return to India, he wanted to send them a British-made watch each as a gift. Pyarelal 'ransacked the whole of Bombay and returned with two crates full of watches'. Despite having more than a hundred excellent watches to choose from, Gandhi refused to make a selection as the watches were all Swiss-made!

Here, as with everything in Gandhi’s life, his insistence on British-made watches was no empty gesture. At the time, Gandhi was getting the nation ready to boycott British goods as a mark of political protest. In insisting on the British-make of his gifts, Gandhi wanted to send a message that he had no animosity against the English people as such. He was not boycotting their goods merely because they were British.

During the buildup of the current controversy and in his recent comments asking for the auction to be retracted, the seller reportedly offered to donate the items to India if the Government vastly increased its spending on the poor. In this, he has done well in drawing our attention to India’s shameful neglect of its own citizens. Gandhi would certainly have appreciated the point being made. However, it’s doubtful if he would have approved of the manner in which the seller placed his bargaining chips on the table.

If such bargaining is undesirable, what actually transpired in the auction room is even more problematic. As a life- long advocate of temperance and prohibition, Gandhi would have been absolutely distraught at the idea of an Indian liquor baron bidding for, and winning the items on sale. Despite the chest-thumping about national pride being saved, the final bid represents a low-point in our public life. Throughout his life, even at the risk of alienating his own people, Gandhi had insisted that the right ends could only be achieved by using the right means. In this, both the seller and, most certainly, those ‘representing India’ have failed.