It is India's turn to join the war of words and pour derision over the good General's rhetoric. 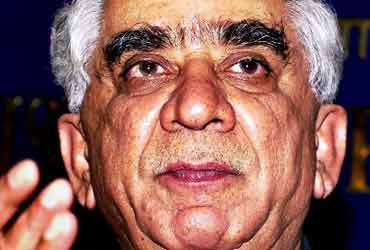 It was India's turn today.

Responding to the bellicose General's belligerence, the Indian government described the television address made by Pakistan's president, General Pervez Musharraf, as "disappointing and dangerous" and warned that it had only increased tensions over Kashmir and that it contained mere repetition of some earlier unfulfilled assurances to curtail cross-border terrorism.

The General's televised address on Monday night was "disappointing because it contained merely repetition of some earlier assurances which remained unfulfilled," India's external affairs minister Jaswant Singh told a press conference in New Delhi today. It was dangerous because "it involved belligerent posturing" which have led to "tensions being raised and not reduced," he said.

Pakistan has not taken any step to stop "the lethal export of terrorism" from its soil, Singh said: "Mere verbal denials" about stoppage of cross-border terrorism were untenable as the situation on the ground was quite different.

'Epicentre of terrorism is in Pakistan'

Saying that the "epicentre of terrorism is in Pakistan", the external affairs minister said that the terrorists targeting India and other countries "have received support from the state structure of Pakistan".

The current war against terrorism will not be won decisively unless the base camps in Pakistan were closed permanently, he said. He said India will take all such measures that are necessary.

He also charged Pakistan with holding threats of nuclear weapons and terrorism simultaneously and asked the international community to take note of it. "General Musharraf and many ministers of his Cabinet are talking casually about nuclear weapons... About nuclearisation of terrorism," he said.

Asserting that India continued to follow the policy of no first use of nuclear weapons, he added "we are not talking of it."

His commitments are not essentially born out of UN Resolution 1373 but make it incumbent on Pakistan to abjure violence, stop infiltration of terrorists, dismantle terrorist camps and stop using terrorism as an instrument of state policy, Singh said.

Asked how much time India was ready to give to Musharraf to fulfill these commitments including handing over of 20 terrorists and criminals, he said "it will be difficult to specify time as sufficient time has elapsed" already in this regard. "The terrorists are taking shelter in Pakistan," Singh said.

He dismissed a question that due to recent developments, the Kashmir issue had become trilateral.

Singh said India could not be "continued to be penalised for its patience" as every time it was attacked by terrorists, the world community told New Delhi to exercise restraint while assuring that Pakistan would take steps.

The minister said "let me share the concern India has. On October 1, 2001 the Jammu and Kashmir Assembly was attacked. We were advised that Pakistan would take action to stop cross-border terrorism, so India should exercise restraint.

"Then came December 13 when Parliament was attacked. We were again told that we should exercise restraint," he said.

Referring to the January 12 speech of Musharraf, Singh said certain terrorist camps were shut down and several terrorists were arrested.

"These camps have come up again. You know how many of the arrested persons have been released. Take the case of Azhar Masood, he lives in his Bungalow and is paid Rs 10,000 every month," the minister said.

Then came the Kaluchak attack, he said adding Pakistan had not lived upto its promises. About the missile tests, he responded that "They are either imported technology or imported hardware."

Condemning Musharraf's remarks on Hurriyat leader Abdul Gani Lone's assassination, Singh charged the Pakistani ruler with trying to give political colour to a "heinous crime". Musharraf had rejected allegations that Pakistan's ISI was responsible for the killing in Kashmir last week and said Islamabad wanted to know how the killers could vanish in thin air in the presence of thousands of troops and people.

Asked whether it would be easier for India to deal with a democratically elected leader in Pakistan and not a military ruler, Singh said "we have to deal with the world as it is and not as it ought to be. So I deal with Pakistan as it is." He said it was for the people of Pakistan to decide their leadership.

Singh refused to comment on the mandate secured by Musharraf at a recent referendum saying it was an internal matter of Pakistan. However, the minister said "we have always stood for democracy. We will be happy if democracy returns to Pakistan."

To a question, Singh said the pressure applied by US and UK on Pakistan was not working. "It is not to my subjective satisfaction....What results we see on the ground was important. On Tuesday there was a third missile test. Monday's Musharraf's speech and there are all other kinds of activities by Pakistan", he said.

"It is really for US and UK to assess for themselves as to whether their pressure is working because this was their stated objective to fight against terrorism. There should not be any deviation. It is for UK and US to consider", he said.

Asked whether Home Minister L.K. Advani's statement that India has to adopt "another strategy" to counter Pakistan's proxy war means India will have to go in for war, Singh said the essence of what the home minister said was that if a particular medicine was not working then try another.

To a question, Singh said suggestions that Musharraf was not having enough control over terrorist activities were "intriguing".

"You cannot have 98 per cent support of people of Pakistan, as I am informed he had got in the referendum, and simultaneously claim that you don't have knowledge of what is happening in Pakistan," he said.

Musharraf has "time after time" said that he was in full control of affairs and there was "unity of command", he said, adding his allies are also saying that he is "fully in control".

"These are simultaneously contradictory assertions... You cannot have it both ways," Singh said.

But when it came to India's demand for handing over of terrorists wanted in India "the facts speak for themselves", the minister said.

The Trigger of Terrorism

Asked why India could not start the dialogue process with Pakistan, Singh said "India had never been against starting the dialogue. But for that you have to create an atmosphere conducive for it.

"You cannot put the terrorist pistol to the head and say have a dialogue otherwise I will pull the trigger of terrorism," he added.

India had been subjected to a proxy war on its land and against its civilian population for two decades, Singh said.

"We have been facing war for two decades," he said when asked as to how long India was prepared to wait.

Singh said that after September 11 terrorist strike in the US, President Bush had said that war has been declared and that threat of terrorism had redefined the conflict from the traditional and conventional sense of war.

Singh said India would reciprocate if it was evident that Pakistan has taken steps to stop infiltration and close the terrorist camps.

"I do not want to comment on hypothetical situation but if it is evident that infiltration is stopped and they have wound up the terrorist camps, not temporarily, but wound up. If the action which could be seen on the ground. India will reciprocate," he said.

Asked whether India was considering carrying out strikes in Pakistan, Singh said there were "assumptions" about it and he did not want to "go into theoretical discussions on such assumptions."

He said the presence of US troops in Pakistan was a "factor" being considered but "not an inhibiting factor" in the framing of policy decisions.

Asked whether India would continue to wait for Musharraf's speeches or do something concrete, Singh said "concrete action is being taken."

Asked why the Prime Minister had said that India should have struck immediately after the December 13 attack on Parliament, Singh said "the Prime Minister had never said that. He said it would have been better if we had acted after December 13. But the international community came to us and requested that we should exercise restraint." Examining the pros and cons, India had exercised restraint, the minister said.

Asked how long would India exercise restraint, the minister said "as I have said India cannot be continued to be punished for exercising restraint."

Singh dismissed as "far from truth" Pakistan's claims that the terrorists and criminals demanded by India were not in that country. "Pakistan government has full knowledge who is where," the minister said adding some people from India who had gone to Pakistan had seen them besides which there is "authoritative information".

He particularly refused to believe that government did not know where Jaish-e-Mohammad chief Azhar Masood was. "Such statements are regrettable," he said.

"India cannot be continued to be punished for its patience", Singh said adding that if Musharraf took any action on the ground which was irreversible one, then India would reciprocate.

Asked about reports that Pakistan has opened a new front in Kargil and Drass by resorting to artillery fire from across the LoC, he said it certainly ran counter to what Musharraf said in his address.

"I am aware of these developments taking place in Kargil sector and particularly Drass sub-sector and artillery fire from across the LoC. Every such assault is immediately retaliated effectively and shall be retaliated", he said.

Dubbing as "sheer irresponsibility" Musharraf's statement terming India "irresponsible", Singh reiterated that the Pakistan President lived in an "Alice in wonderland"-like world. "I am astounded....

But military vocabulary has its limitations," he said. Recalling Musharraf's response after the December 13 attack on Parliament, Singh said "I am used to military malapropism of the general."

Asked whether India's action against terrorism would be approved of by the world community, Singh said "India is not waiting for approval of anybody. Government of India does not work on anybody's approval. It works on assessing the totality of the situation and acts on its own assessment of the situation and in the best interest of the country."

India did not need crutches to fight its war, Singh said adding that nation's fight against terrorism did not start in New York on September 11 nor did it end with Afghanistan.

He said a major factory of terrorism in talibanised Afghanistan, which produced terrorists 365 days a year, had closed.

Its radiation were felt in many parts of the world including India, he said adding that the "epicentre has now shifted to Pakistan".

Singh said he was "deeply disturbed" after reading Musharraf's interview to the Washington Post in which the general had said that if a war broke out with India his country will take the offensive into Indian territory.

Musharraf had dismissed as a "gimmick" reports that New Delhi had given two months time to Islamabad to stop cross-border terrorism.

The escalating tension was stoked further by Pakistan concluding a four-day missile testing programme on the day when the British foreign secretary, Jack Straw, arrived for diplomatic talks with Gen Musharraf.

"I am under no illusions about what I may or may not be able to do," he said.

From Speech To Action