For many in Nagaland the issue became a confrontation between the saffron-inclined CM and a church-body, rather than the issue of women reservation. 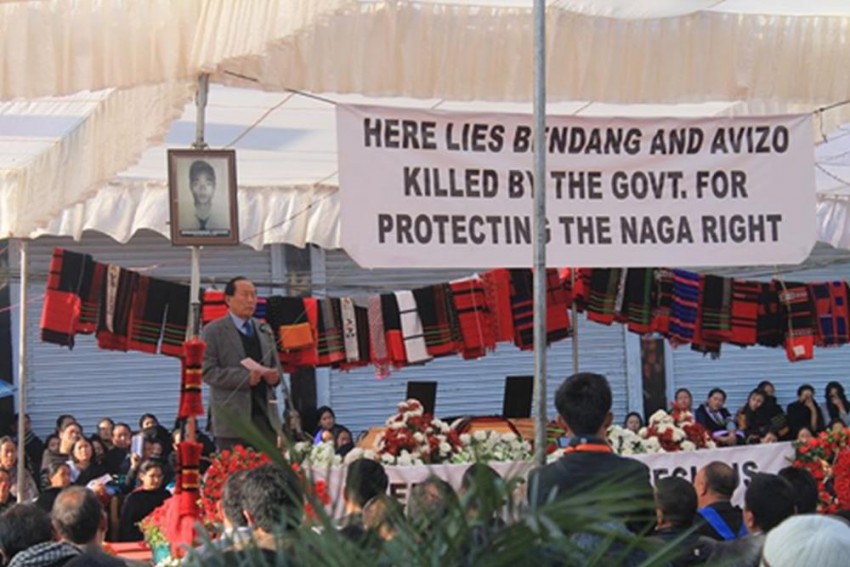 The Joint Coordination Committee leaders and the Nagaland Baptist Church Council (NBCC) leaders sign an agreement on January 31, 2017 with a functionary of the Nagaland Government to postpone urban local body polls
Linda Chhakchhuak 2017-02-08T13:43:04+05:30 Demand For Women-Reservation In Nagaland Is Only One Reason For A Spate Of Violence In The State 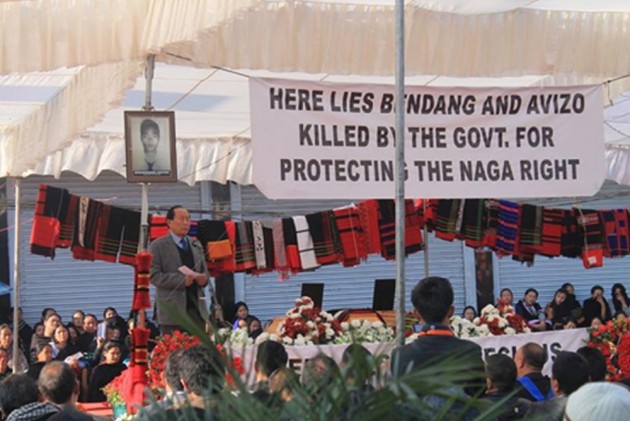 Political heat is burning Nagaland as the temperature, even for this perennially troubled state, hits records levels. The dry prairie is easily catching fire.  Every citizen--youth, woman and man are like cats walking on hot coal. Children shiver in fear remembering the fiery blazes and the noisy violence.

In this current case, the bone of contention they started out with was the pet-punching bag of every player-- women getting 33% seat-reservation in the Municipal and Town councils.  It seems to figure as the most important issue in the state as all manner of alliances are pinned together to punch it down or raise it up. This issue has reached flash points every now and then over the decade since it was enacted in the Nagaland Legislative Assembly in 2006. This time however, the actors never may have bargained for the aftermath—three dead, dozens injured, 42 or more office buildings razed across the state, several to the ground, documents et al(no doubt with major implications for various investigations going on about expenditures and corruption). Several vehicles torched, homes of candidates set on fire, age-old inner tribal alignments strained and fissured and to add to all this, a standing general demand for the chief minister of the state, T.R. Zeliang to resign with his cabinet.  Or else. These two words resonate unsaid as a dangerous tail to every demand or diktat.

Both —on one side the tribal organizations and on the other the Chief Minister Zeliang and his legislators-- are arrayed for what seems to be a fight to the finish.  Nagaland enjoys the dubious distinction of being a state with no official Opposition party as all legislators, totaling 60, have joined the Ruling platform called the DAN. Zeliang with his party, the Nagaland People’s Front (NPF) heads it.

The least that knowledgeable observers expected to come out of this high voltage spectacle of chest-thumping is a change of guard. At the most, it will bring in sea changes in the way Nagas will see and relate to each other henceforth.

Because nothing remains the same.

The most shattering outcome of the preceding days of havoc is that the iconic Naga Mother’s Association (NMA), an organization that has been an anchor and a shelter for the doves in the great Naga debate as opposed to the war-mongers, lies broken amidst the debris in the streets. Being blamed as the cause of the violence with their “stringent” demand for implementation of the 33% reservation for women clause, the 34-year-old NMA has been asked to disband itself by the all male apex tribal bodies platform called the Joint CC. The apex tribal bodies of each tribe has ordered women’s  groups of their individual tribes  to de-federate themselves from  the organization, which since 1984 has worked untiringly to bring the warring factions of the Naga movement  to the negotiating table and bring to the fore the impact of the violence on the women, youth and children.  The Angami apex women’s organization, the virtual backbone of the NMA has withdrawn its membership  and was followed by other tribes.

The Watsu Mungdang was the first women’s organization to be ostracized by its own apex tribal body, the Ao Senden, when in defiance of the latter’s diktat, the Mungdang walked in a procession in support of 33% reservation for women in 2006. They were asked to disband then just as the NMA has been ordered to do so now.  After years in the outhouse, they were allowed to re-group and carry on its work. One can imagine though that the zeal for freedom to decide is rather subdued now.

The NMA is suffering through a similar crisis. No doubt, there are many who feel that the current leaders of the NMA failed to read the signs and re-strategize their campaign to rope in more support among the common people to change attitudes. “Convincing  government people alone is not enough as politicians will only do things for their own selfish interests,”  is how one person put it.

But the loss is enormous for the society at large. At a time when the NMA with its soft power and influence is most needed to help the Naga society tackle the other fires consuming the state, the mother organization is battling for its very existence. Unwilling to be cowed down though, the NMA replied to the demand for its shut down by quoting its own constitution which forbids any external interference in its inner workings.  With its experience it will survive to fight another day.

“No external body can ask the NMA to shut down. It will have to be a decision taken by the association itself and that we are not willing to do,” said its statement. However, under extreme pressure from the male dominated bodies, it has surrendered its right to seek any future relief from the Apex Court which is a major defeat for women’s right anywhere. But as the Chief Minister Zeliang pointed out in another context, anybody from anywhere can file an appeal.

The tribal apex bodies deny that they are male chauvinists and claim they are not against women being part of the governance in municipal bodies.

“We have never forbidden women from fighting elections as candidates; we welcome them. We are only against 33 percent reservation in the councils. When there is no difference between men and women in our society why should there be any reservations for them,” said the Naga Hoho President, Chuba Ozukum.

Moreover, the president also said that there are they are becoming aware of the fact that the Municipal and town council Act endanger the rights of the tribes over their own land and are liable to be taxed eventually. It goes deeper than the argument that reservation for women goes against the customary practices of the Naga and therefore is a  breach of the article 371 (A) of the Indian Constitution.

The women campaigners have their answer to that when they point out that the electoral process in Nagaland is as corrupt and violent as anywhere else if not more. “Women who are without money and power cannot compete in the vicious competition,” said NMA leaders at various times.

In December 2016, the Naga Hoho had hammered out a compromise formula for resolving the issue. Instead of reservations, the Hoho suggested that the various municipalities and the town councils go ahead and nominate women members chosen out of a consensus. They would have voting rights too. This was rejected by the NMA as untenable, which many others feel was a wrong decision by the NMA leadership.

Naga society is an out and out man’s world. In it, women have no agency, say frontline Naga intellectuals. But despite all the odds the latter have managed to come up to a certain standard where gender indicators seem positive, giving the society a bright report card where education and employment of women are concerned.  This does not reflect a change in attitude in the society’s traditional view of the rights of women to be equal citizens. Rather, it is only because they are ‘allowed’ and ‘tolerated’ to participate in these activities because of the needs of modern society.

So under these circumstances, the question arises:  Was the violence between January 31 and February 3 this year only a reaction to the demand for the 33 percent reservation for women?

The knowledgeable point out that the state was already at boiling point with many simmering tensions. One was the call for the full disclosure of ‘taxation’ by the armed groups pleading for implementation of “one government one tax” by a new organization called the ACAUT.  This has shaken the very foundation of the uneasy status quo that has prevailed in the state in which for the past decades people in all walks of life have been silently paying ‘tax’ to several armed factions. At last count the National Investigation Agency was investigating the payment of such ‘taxes’ to nine underground factions by various Nagaland Government departments.

Inter-tribal tensions over turf is a major concern particularly with the opaque Indo-Naga accord signed between the Government of India and the NSCN(IM) which seeks territorial reorganization of the Naga areas, particularly between Nagaland and Manipur. However, the underbelly of these demands was exposed last December, when two apex bodies of the important Naga tribes, the Ao Senden and the Lotha Hoho walked out of the Naga Hoho without much ado over the Hoho’s accepting the CM Zeliang cabinet’s approval given to Rongmei community as an Indigenous Tribe Status in Nagaland . The Naga Hoho soon rebuffed the Zeliang approval to appease the two recalcitrant tribal bodies, without whom the they would be a toothless tiger. The Nagaland cabinet too had to withdraw its approval leaving the smoldering question of Naga unity up in the air.

The Heraka heritage of the chief minister Zeliang is another unsettling force in the predominantly Christian-dominated state. His Government’s penchant to re-institute the legacy of Rani Gaidilui, the Manipur based leader of the Heraka movement in Nagaland, has not been taken kindly in many quarters of the state. Many have questioned the need to install a figure who has hardly done much for the Naga movement or Nagaland as a state. The Heraka culture brings along with it the saffron colors of the RSS-Bharatya Janta Party (BJP) as it has been aligned with it from the beginning.

As far as the municipal council elections and the women’s reservation issue is concerned, observers say that the Nagaland Government hardly showed any commitment to it which was observed in the way the Chief Minister flip-flopped over the elections. After giving the go ahead for holding elections despite reports of law and order not being conducive, the Government backtracked after a while. Then Zeliang signed a three way agreement to defer it for two months with the Joint Coordination Committee; (JCC) a platform of all the tribal bodies and the Nagaland Baptist Council of Churches, in January. Then after receiving a Guwahati High Court order to conduct the elections, the Chief Minister broke the agreement to have the polls again. This was taken as a major insult to the Naga tribal organizations as well as an affront to the NBCC which is revered by the people of the state as an apolitical body. This was the point, where one suspects, that for many in Nagaland the issue became a confrontation between the saffron-inclined CM and a church-body, rather than the issue of women reservations.

To add to the confusion, there was a growing realization that the Municipal Act accepted by the state in 1993 had elements in it that puts the tribes in a complicated position of eventually having to pay tax on their lands, reserve seats for castes and general category populations etc in the hilly councils. This is said to have created a fear psychosis and sparked off public emotions which rumbled up the violence.

For some it was all with an eye on the state elections next year.