In a contest between non-sectarian Indians and sectarian ones, the latter are beginning to lose supremacy. An excellent time to jettison complacence and to drive home the all-important task of exorcising the ghosts that haunt "resurgent" India 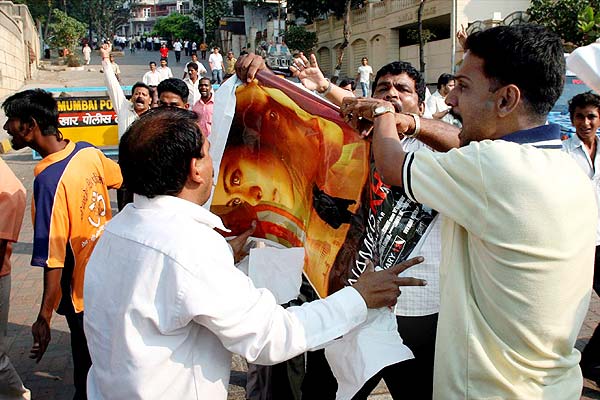 Shah Rukh Khan is a Delhi boy turned a bouncy Bollywood actor. He is married to a Hindu girl, and like most actors, lives in Mumbai. Alas, I do not much like his movies.

He is also staunchly proud of being an Indian (often too loudly so), and unselfconsciously avails of everything that a shining India has on offer—game shows, talk shows, sundry public events, and the IPL T20 cricket tamasha. His groupies span delirious young Indian women from every community and caste. Solid contribution to national unity there.

IPL is a privately owned and conducted tournament. Its inaugural event is a public auction in which different franchisees (of which Shah Rukh owns one) bid for and buy cricketers from India and sundry other nations, complete with the gravel and shouts of "sold".

As in all private enterprises with an eye on the main chance, players are evaluated for their commodity value regardless of what nationality they belong to.

Currently, as per international rankings, the world's top-rated T20 national team is the Pakistani team.

At the recent auction for the coming IPL tournament, some eleven or so swashbuckling players from Pakistan were up for the bid.

Not one of them was bought.

A silent and considered pall of denial seemed clearly to have been at work across competing franchisees. Cricket and money-making seemed to have yielded to politics, however the franchises' spokespersons pleaded a disinterest in everything except cricket and money.

Laudably, many voices came to be raised at this blanket boycott of players from the world's top T20 team. Among them that of India's most hawkish home minister who refused to be taken in by the disingenuous disavowals peddled by the franchises. He was gentleman enough, as he always is, to point out that any nation whose players were thus rejected enblock had some cause to feel slighted.

The home minister is a Hindu (indeed a Brahmin) and most hard on Pakistan for fomenting terrorism. He not only quashed the rumour that the government had anything to do with the sinister decision of the IPL bosses to refuse the Pakistani players, but expressed an enlightened disapproval of what they had done.

Among those others who decried the IPL plot was Shah Rukh Khan. Like all other decent commentators, he expressed the view that the Pakistani players should have been bought, given that they are indeed some of the best in the business.

Which is when all hell broke loose in Mumbai.

The Shiv Sena supremo, Bal Thackeray was quick to comment in the party organ, Saamna, that Shah Rukh was, after all, no ordinary Indian; he was a Muslim.

Unlike any other comment favourable to the discarded Pakistani players, his comment clearly must be seen to harbour a pro-Pakistani bias.

Once the supremo had given his signal, what was to prevent the lumpen armies to go to work. Shah Rukh's posters and effigies have been duly consigned to the flames of patriotism, and his house besieged and vandalized. Instructions have gone out that his forthcoming movie must be boycotted. And he has been advised to make Karachi his home.

All that when one would have thought that the prime target of the "patriots" ought to have been the home minister whose job, after all, is to secure the nation from Pakistani perfidy rather than express sentiments favourable to their cricketers!

But then he is a distinguished Hindu. Whereas, "by favouring the inclusion of Pakistani cricketers, Shah Rukh has proved that he is a Muslim first and foremost and that he will continue to support Pakistan at the cost of our own national interest" (this from the inimitable Praveen Togadia of the Vishwa Hindu Parishad, whose voice was among the loudest at the time of the Gujarat anti-Muslim massacre of 2002.)

As luck would have it, another one of India's finest actors, Aamir Khan—one whose work I do much like—also concurred with Shah Rukh and the home minister to fault the IPL plot. But, as his luck has it, he also is a Muslim. Thus, the Shiv Sena's Dopahar Ka Saamna was quick to rope him in: "according to Aamir, if any cricketer is good, he would like to have him in his team, it makes no difference to him which country he belongs to."

Incidentally, this same Aamir Khan has just received a national award on India's Republic Day when distinguished Indians are thus honoured by the state. No end, the Sena would say, to the Congress Party's "appeasement" policy.

Lest you think the pot is now boiling at white heat, think again.

Until the IPL fiasco broke, the Shiv Sena in Mumbai had been more intimately occupied with another pet hate—that against "immigrants" from north India, especially Uttar Pradesh and Bihar whose denizens are pejoratively called "Bhaiyas" in Mumbai.

Having recently received puissant challenge from Raj Thackeray's tirade against "Bhaiyas" who are seen to gobble up job and other opportunities that "rightfully" belong to the "indigenous" Marathis, the Shiv Sena has had work to do in bettering the intensity and "authenticity" of that tirade.

The RSS makes it known that Mumbai belongs to all Indians after all, not just to Marathis, a position enunciated also by such Mumbai and Indian icons as Sachin Tendulkar and Mukesh Ambani.

Yet, despite being sound Hindus, the Shiv Sena has thought nothing of lambasting both Tendulkar and Ambani, clearly suggesting that when it came to a choice between its communal and regional loyalties, the Shiv Sena will privilege the latter.

Happily for them, however, the Shah Rukh/Aamir Khan interventions have provided the Shiv Sena the opportunity to quickly remind everybody that its regional/ethnic passions have in no measure lessened its communal ones, as it declares war on both fronts.

All of which leaves the RSS in some quandary.

Where the regional/ethnic pogrom unleashed by the Sena threatens to divide Indian Hindus and thus invites to be corrected by the premier Hindu outfit (RSS), under ordinary circumstance the Sena's tirade against the Muslim actors should have nicely gelled into this enterprise.

The problem is that Shah Rukh and Aamir are also Hindi-speaking north Indians, something that must make it awkward for the RSS for now to set them apart for opprobrium while other north Indians are sought to be protected from the Sena.

Thus it would seem that so long as Shah Rukh and Aamir can be constructed essentially as being north Indians, they may receive the RSS's protection, since other north Indians would also want that to be so. And, only when the current regional/ethnic contestation subsides, and the two can be unproblematically constructed as Muslims rather than north Indians may the Sena's campaign against them be endorsed.

Quite a pickle that.

Moral of the story: once you have refused to acknowledge that India's identity is a conglomerate one wherein unities must be discovered along axes other than those pertaining to social/communal identities, you may forever be making a hash not just of those identities but principally of your own pretensions to being "nationalists" par-excellence.

Happily, India has much changed since the demolition of the Babri mosque in 1992, and it can be said that in a contest between non-sectarian Indians and sectarian ones, the latter are beginning to lose supremacy. An excellent time then to jettison complacence and to drive home the all-important task of exorcising the ghosts that haunt "resurgent" India.

And in that enterprise, there is no greater ally than India's impoverished millions (some seven out of ten) who couldn't care less about who belongs to what region or bears what name.