BS Yeddyurappa Does An Atal Bihari Vajpayee, Here's What Happened 22 Years Ago

Led by Vajpayee, the BJP had in 1996 formed the government at the Centre and was asked to take a floor test. 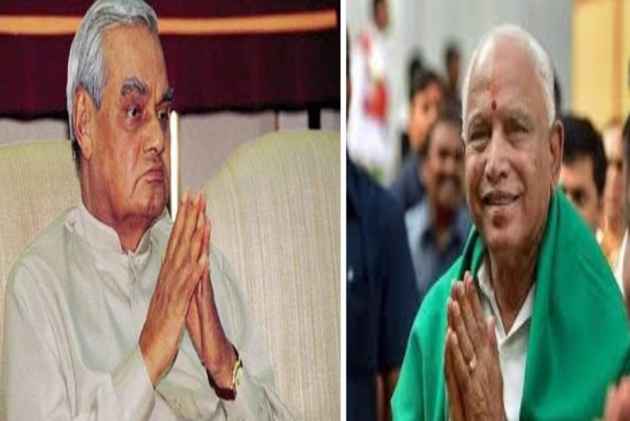 Karnataka chief minister BS Yeddyurappa on Saturday did what Atal Bihari Vajpayee had done over two decades ago --resign without facing a floor test.

Led by Vajpayee, the BJP had in 1996 formed the government at the Centre and was asked to take a floor test.

Vajpayee -- who was sworn in by then President Shankar Dayal Sharma -- too did not have the numbers to back his claim.

Vajpayee had made an emotional speech in the Parliament before announcing his resignation. Lack of requisite numbers did not mean the BJP had served the motherland less, he had said.

The 13-day Vajpayee government was later replaced by the one led by HD Deve Gowda, whose son HD Kumaraswamy is now set to be the next chief minister of Karnataka with the Congress's support.

The three-day-old BJP government in Karnataka collapsed on Saturday, minutes before the scheduled trust vote, with Chief Minister Yeddyurappa resigning in a tame anti-climax to what promised to be an edge of the seat political thriller.

With defeat staring him in the face, Yeddyurappa announced his decision to quit on the floor of the Assembly after a brief emotion-laden speech.

Though exuding confidence about winning the trust vote as the D-day loomed, Yeddyurappa failed to muster the support of 7 additional MLAs required to ensure the longevity of his government.

Yeddyurappa's three-day tenure as the chief minister of Karnataka also turned out to be one of the shortest in Indian history.

The 75-year-old BJP leader was sworn in as the chief minister of Karnataka on May 17. He resigned before facing a Supreme Court-mandated floor test today.

The BJP veteran's initiation to the league of chief ministers with tenures of a few days, however, happened over a decade ago. In 2007, Yeddyurappa had to resign as the chief minister of Karnataka after just eight days.