Are We All Nationalists Today?

The left has been put on the backfoot, and is on the verge of swapping Kanhaiya Kumar with Umar Khalid… 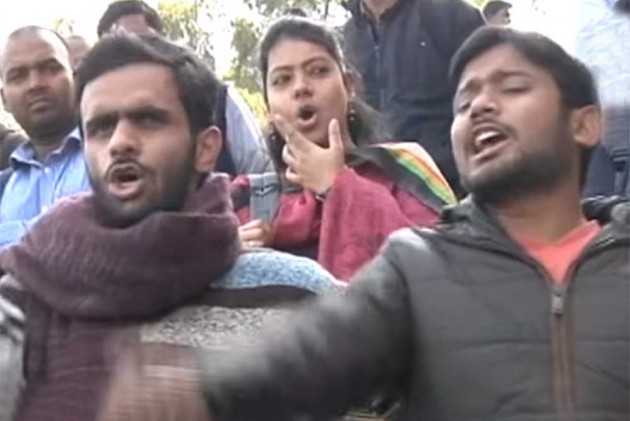 Everybody knows that the slogans given in JNU, for all their rabid 'anti-nationalism', were mere slogans without any real intent of violence. At best they were raised by some imbecile urban radicals who would not act on those slogans and would instead get on with 'campus life' the next moment. It was 'ultra-left' politics at its shallowest best, whose only function was to egg on the security agencies.

Yet, extreme bad faith by the current regime has converted this vanishing affair into an entire plot and conspiracy going back to Hafiz Saed, Jaish-e-Mohammad and what not. The delirious 'India First' media imagines that the 'nation is asking' it to uncover a 'jihadi-Naxal plot' (!) to plant a bomb or discover a terror camp in JNU campus. But surprise, surprise, it is not to be found!

But the hysterical attachment to this bad faith, mobilising such great energies and anger as we see with an O. P. Sharma or Arnab Goswami, as though they genuinely believe in the reality of such a plot, only means that there is a real content to it. What could that be? It is nothing but the dominant majority's subconscious fear of another 'plot', the real one.

Just look at the recent Delhi Police Report to the Home Ministry which states that 'these are the same people' who wanted beef on campus and who want to worship Mahishasur instead of Goddess Durga. These are, one can add, also the same women fighting for their rights, Dalits who want to be empowered, the adivasis who challenge the state as Maoists. And now they are also to be found in Jadavpur University and elsewhere. The plot and conspiracy they are looking for is none other than the challenge to this dominant social order. They were on the back foot in the Rohith Vemula case, and now it is a chance for a come back they don’t want to miss.

Whether Kanhaiya Kumar actually uttered 'those slogans' has become so overloaded with drastic consequences, since if he has, then in one stroke the right-wing is able to delegitimise the struggle on social questions: by calling it treason. Challenging the social order, fighting for justice, is treason!

But let’s face it: our youthful radicals gifted this opportunity to the right. They indulged in avant garde radicalism of elitist one-upmanship. They provoked the all-too-eager security wing of the deep state for no good reason. And it turned out, they were neither guerillas nor mass leaders.

The thing is that today those who swear by the Hindu majoritarian 'politics of hurt' preside over a vast and all-powerful state apparatus. This means that any 'gift' provided by elite radicals which can be presented as 'hurting the nation' will now have drastic consequences. This is one difference between the BJP and Congress governments for all their other similarities.

This however does not mean that the left should give up on these radical positions on Kashmir or on judicial killing and take a compromised position. In fact, today the left (including the radical left) is pushed to a compromise line of argument: that we are actually more nationalist than the BJP, if only you parse the evidence properly, if only you were to listen in to Kanhaiya's 'other speech' where he upholds the Constitution and so on. The left has been put on the backfoot, and is on the verge of swapping Kanhaiya Kumar with Umar Khalid.

It is unable to stop itself being pulled by the drift of the entire political spectrum towards the right. The earlier and very valid point (on the Afzal Guru hanging) that 'satisfying the collective conscience of society' does not comprise a legal argument, or that oppressed peoples (for example, India before 1947 or Kashmir, Balochistan, Scotland, Tibet, Palestine, Tamil Eelam in Sri Lanka, Chechnya, Kurdistan today) have the democratic right to self-determination -- this is something that even the radical left today finds difficult to argue.

But the way to stop this drift towards compromise is not by starting with the maximalist and most extreme slogans even if this 'right' is formally sanctioned by the constitution, as say 'freedom of speech'. We should not imagine that the democratic spaces like JNU are foolproof cover against the depredations of the security agencies. Bluntly put, if you are going beyond Congress secularism/socialism or the official Left's idea of 'fighting communalism', then you should be ready to face the security establishment and the courts and vigilante fanatics out to uphold 'the collective conscience of society'.

The more general point is that sometimes we forget the limits of challenging public morality by pushing constitutional morality. For, beyond a point, constitutional morality takes the backseat and public morality (of the dominant order) asserts itself and reinscribes its writ through the likes of O. P. Sharma or, not to forget, from an earlier time, HKL Bhagat and Babu Bajrangi. The liberals or say the Congress kind of soft challenge to public morality, by say proposing secularism (that also, one which allows a Muzaffarnagar or an anti-Sikh pogrom 'on the side') against communalism, is well covered by constitutional apparatus. You don’t have to fear the security agencies for proposing that.

But beyond this, like many of the left's radical proposals, will see the constitutional morality give way to vigilante 'public morality' taking over, as with the Delhi Police report above. The left misreads and overestimates the robustness and strength of constitutional morality and trusts it into dangerous territory. Kanhaiya in jail and other 'organisers' having to flee is testimony.

So what is the alternative? The alternative is to 'begin from the beginning' - the left must start from being part of the everyday struggles of the people. It must advance its own 'plot' in and through the language and struggle of the oppressed people.

Instead of scoring points on true nationalism, the left should go back to the beginning. When the Maoists started armed struggle, they first did years of 'silent struggle' on basic questions. So while they violated the constitutional order and could earn the epithet 'violent anti-nationals', no OP Sharma or a Rajnath Singh or even Chidambaram could easily eliminate them since they have got the cover of a mass democratic mobilisation in areas where they work. Or consider this: The Maruti workers are pretty nationalist, raising slogans of 'Bharat Mata', and yet they work with the 'anti-national' students, 'the same group', and other left wing organisers.

Even in this case, 'the same group' of students are part of the struggle for fellowship which the UGC sought to withdraw. They fought for the right for basic wages of casual workers at construction sites within JNU. Whenever there is demolition of slums in the city, these are the ones who have rushed to defend the poor. Stranded Rohingya refugees too got help from these students. The extra deprivation points that students from marginalised backgrounds get in JNU admission itself is a part of this wider struggle. And the JNU student election platform provides as much space for right-wing nationalist views as to the left-wing ideas.

Can we shift the debate from nationalist versus anti-nationalist, to nationalist versus internationalist? After all, the left's approach to nationalism is clear. It is none other than what Marx and Engels declared: workers of all countries unite! Both Kanhaiya and Umar Khalid do place themselves in this tradition -- as communists, in the footsteps of Bhagat Singh. Hence we cannot sacrifice Umar Khalid who is now being tainted as a Muslim radical or a jihadi/Islamist.