Home  »  Website  »  International  »  Myanmar: Military Unlikely To Be Cowed Down By Threats Of Sanctions 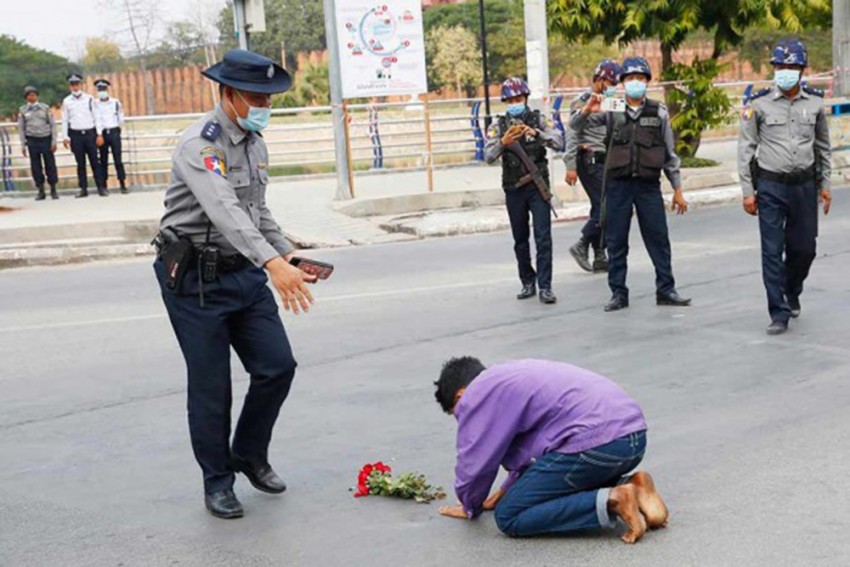 A protest supporter offers flowers and kneels on a road before a police officer in Mandalay, Myanmar.
AP/PTI
Seema Guha 2021-02-09T17:05:18+05:30 Myanmar: Military Unlikely To Be Cowed Down By Threats Of Sanctions 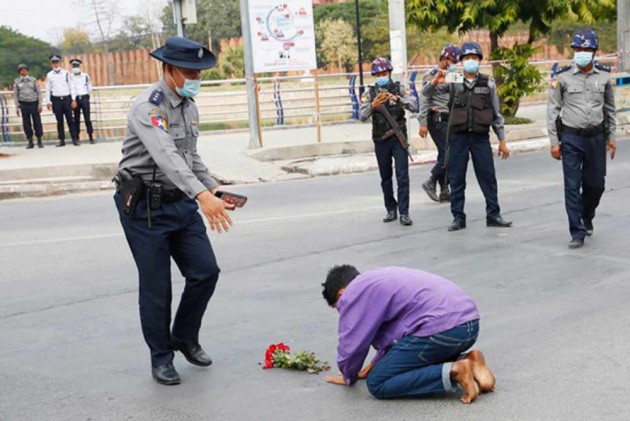 The fear of a brutal military crackdown is rising by the day in Myanmar, as more number of pro-democracy protesters are taking to the streets every passing day, to demand the release of their leaders.

The international community, led by the new Biden administration as well as the UN Secretary-General has condemned the coup in one voice. Washington and its European allies have threatened sanctions, but that is unlikely to deter the military to do a course correction. The men in uniform who have ruled Myanmar with an iron fist for over 50-years are unlikely to be cowed down by international threats. During the short period of civilian rule beginning 2015, the army continued to call the shots and held key defence and security portfolios. The brutal attack on Rohingyas in 2017 happened during the army-civilian rule. Suu Kyi defended the military action and was bitterly criticized for her stand. There were demands that she be stripped of her Nobel Peace Prize, awarded to her in 1991 for her valiant fight against the military. Yet the military never trusted her and her popularity remained a constant threat to the generals.

Condemnations and sanctions will not change the ground reality in Myanmar. The military junta are confident that China, Asia’s most powerful country will come to their rescue. In fact, China has already stood up for Myanmar at the UN Security Council last week. A special session of the UNSC convened to discuss the army coup in Myanmar was unable to pass and release a resolution, because China a Permanent Member of the UNSC blocked the move. India too while urging the country to restore democracy will not stop its engagement with the military junta. ASEAN as a group is unlikely to take action or withdraw Myanmar’s membership. ASEAN had generally avoided taking a position on internal matters of member-states.

The leader of Myanmar's ruling junta, Senior General Min Aung Hlaing on Monday addressed the nation for the first time since last week's coup, saying the body now in power is "different" from the past military governments. He explained that the new State Administrative Council includes civilians and members of ethnic minorities. He asked the public to “focus on facts and not be carried away by emotions,’’ according to reports from Yangon.

He also justified the military coup, saying it could not remain a bystander to large scale allegations of election fraud. The General said the army takeover was “inevitable’’ as the civilian authorities had done nothing about the complaints lodged by the Opposition.

To put it simply, the army was nervous of the NLD and Suu Kyi’s continuing popularity. The party victory in the November 2020 elections was a landslide, as it broke its own 2015 record. The military backed party, the Union Solidarity and Development Party (USDP), filled with retired army generals fared dismally in the elections, leading to allegations by their leader Than Htay, of irregularities. Min Aung Hlaing said that Myanmar will "maintain friendly relations with all nations," and said there will be no change in diplomatic policy.

The general vowed to defend Myanmar's constitution and hand over power "after the state of emergency provisions have been carried out to hold a free and fair multiparty democracy general election."