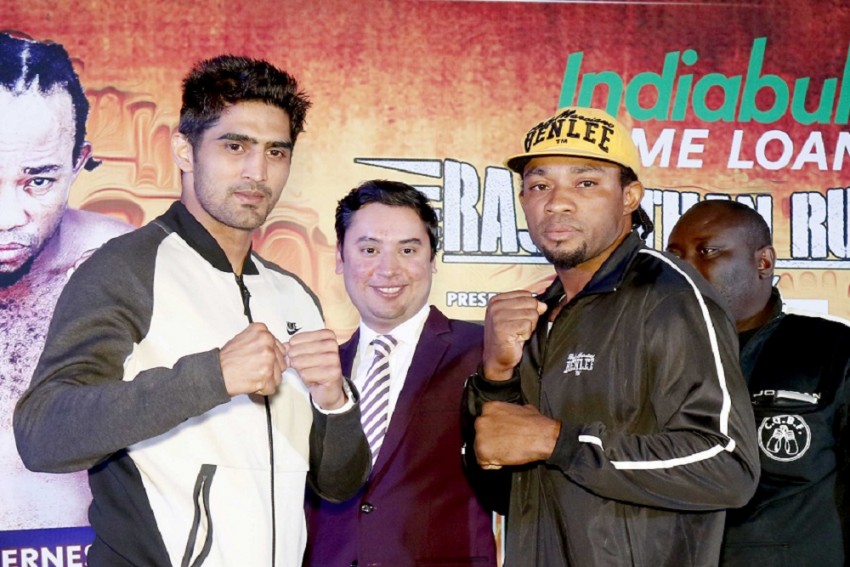 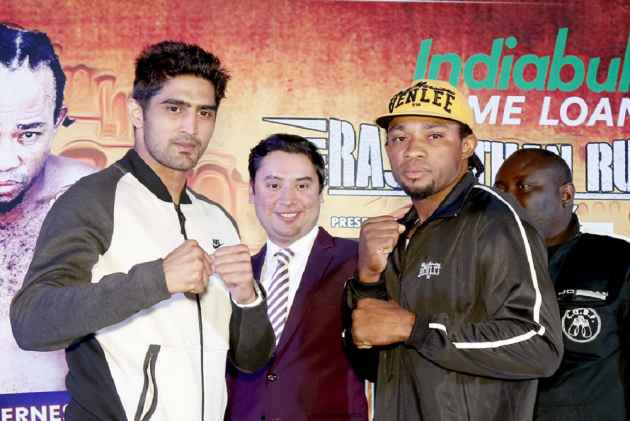 Vijender Singh belatedly went into the offensive to defend his WBO Oriental and Asia Pacific Super middleweight titles with a unanimous verdict over African champion Ernest Amuzu in Jaipur on Saturday, continuing his unbeaten run in the pro circuit.

With this victory, Vijender has now won 10 pro bouts on the trot.

The 32-year-old Olympic bronze medallist has so far enjoyed a great run in the professional career, winning all his nine fights, and tonight was no different at a jam-packed Sawai Mansingh Stadium as he emerged as the king of Rumble Rajasthan.

It was very cautious first round from both, and barring a few jabs here and there, both tried to read each other's styles.

Vijender seemed to have found his bearing only when the sixth round started.

He landed some real hard punches on Amuzus rib- cage to take control of the bout. Amuzu returned the favour with a few of his own, but the West African Boxing Union Middleweight champion could not sustain the tempo against his determined Indian opponent.

A confident Vijender then turned up with renewed vigour to unleash a flurry of punches on Amuzu. Two powerful jabs on Amuzus jawline must have hurt the African, but he retaliated with a hook aiming at Vijender's head.

It was easy picking for Vijender thereafter as the Amuzu committed technical blunders by rushing to the corners.

With Vijender having the upper hand, a tired Amuzu tried to stage a fightback but the Indian was up to the task, even as the duo exchanged a few punches.

Vijender played a percentage game during the final round when he had already suffered a muscle pull and didn't attack a lot.

Prior to this bout, Amuzu had 23 wins under his belt including 21 knockouts out of 25 fights.