...and the fine art of selling dhoklas and theplas 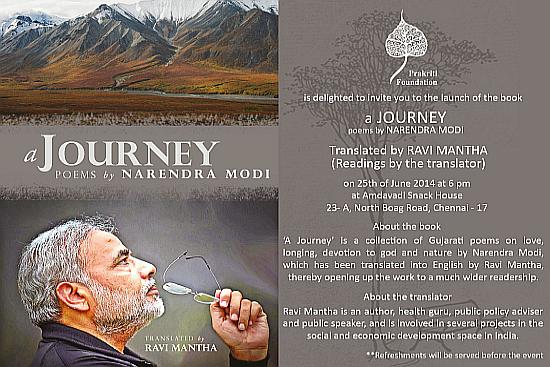 Recently (19 June 2014), when I received the latest email invitation from Prakriti for a book launch, I almost did not register what I was seeing. Then I asked myself “who is this poet Ravi Mantha and why does he look like Modi?” It took me a minute to figure out he was actually the translator of Modi’s so-called poems, published as A Journey by Rupa. I felt shocked, surprised, dazed.

Modi and poetry? And Ranvir Shah/Prakriti launching this? Does Ranvir believe there’s any merit in Modi’s verse—described as “poems on love and longing, devotion to god and nature”—as translated by Ravi Mantha? Since Prakriti has hosted themed documentary festivals (one of which I had curated in 2007) and since Prakriti has curated an annual poetry festival in which scores of young and old poets, men and women, of all castes and religions, of all languages and regions, of all sexual orientations, artists of varying talents and factions, of different races and nations, have read their work, I find your promotion of Modi’s book of poems deeply disturbing. Especially since you said in an interview: “My own inspiration has come from celebrated names in poetry, including Walt Whitman, A.K. Ramanujan and Arvind Krishna Mehrotra, who have moved me immensely.” Do we need to remind you what happened to Ramanujan’s book in Delhi University, and the forces that were behind it?

Since I have known you personally, and since you have supported Navayana’s work earlier, I thought I should keep an open mind and talk to you. Did you really see merit in this book? And that's why I called you. I just wanted to ask you why you were doing this.  I am sure you had thought this through, but I still wanted to hear you out. Your defence shocked me more. You said, this was just a “marketing tactic” and you said you were doing this so that more people come to your Amdavadi Snack House in Chennai, and eat your dhoklas and theplas. “If Modi’s poetry will bring them in, so be it.” I could not believe this. I felt angry and even betrayed.

I kept asking whether you saw any merit in Modi’s poetry. You never answered that question. After my call, you said you understood my concerns and anxieties and said you will write a mail to me. That mail has not come, despite reminders; it may never be written. So I am asking you now, in public, through this open letter to you, especially since I feel I can speak for the many poets whose work I love and respect (some of whom Navayana has published)—Ranjit Hoskote, Meena Kandasamy, Sukirtharani, N.D. Rajkumar, Shaikh Yakoob, Prabodh Parekh,Cheran, the late Dilip Chitre, Kynpham Sing Nongkynrih, Kutti Revathi, Michael Creighton, K. Satchidanandan, Jerry Pinto, Karthika Nair, Tenzin Tsundue, Vivek Narayanan, Nirupama Dutt, Nabina Das, Danish Hussain, etc.—poets who have read their works at your poetry festival, poets who have read the works of dead and living poets that they have taken the pains to bring alive through translations. Poets, artists, academicians, filmmakers and many citizens who have not participated in or attended any Prakriti event will also wonder why.

I told you, “You may get people who think Modi can write poetry to visit your snack house. But you will lose all of us. We may never associate ourselves with you again. Please cancel this event. We will all stick together.” You of course made it clear you will not do that. I am also not sure if I can speak for others who may continue to attend your festivals, learn to move on, etc. Much earlier, Chandrahas Choudhury, the fiction and poetry editor at Caravan magazine, wrote about “the surprising poignancy of Narendra Modi’s poetry”. That was an individual writing in a public blog, and this largely went unnoticed, though I meekly expressed my amusement. The translator, now your guest, even thanked Choudhury for “looking at these poems largely through literary eyes”. I suppose such ground-clearing exercises have led us to this moment of reckoning.

Believe me, I—and many like me—would have been as upset had you organised a launch for Kapil Sibal’s poems. But perhaps, yes, we would have been also a little amused. But with Modi, not so much. One of the things you told me on the phone was: “Anand, I am not political.”But as I said, the very act of hosting a launch for Modi’s book of poems is political; and I reminded you that Navayana and the work I do are indeed intensely political. Neutrality is the most vulgar political position, especially when the most bigoted partisans are calling the shots and you want to play along, and even host them.

You are helping the launch of a book whose author has a missionary friend called Dinanath Batra, who has been targeting one book after another and seems to have a huge list. (Megha Kumar’s ‘withdrawn’ book is about Ahmedabad —will you help her launch it at your Amdavadi if someone finally manages to publish it?) His other friends at the RSS, one of India’s biggest NGOs , have been trying to smuggle in their bigoted version of history into textbooks . And as I write this, yet another Shubha Mudgal concert has been cancelled, in Banaglore this time. She was also bullied recently by a ‘Modi fan’. And academicians are being denied visas to India, NGOs and civil society groups are being targeted.

And now you say you just want to just sell dhokla through what passes for poetry. I hope we can induce you to rethink.