According to reports in Pakistani media, the tentative date for the resumption of PSL 2021 in Abu Dhabi is now June 9 or 10

Confusion reigns in Pakistan Cricket Board (PCB). With gusto, PCB announced that the remainder of the Pakistan Super League (PSL) 2021 will be held in Abu Dhabi. Then players and officials were denied flight clearance to board commercial flights to the United Arab Emirates. And others were even asked to return to their homes in Pakistan after a delay in issuing their visas. Now, no one seems to know what's going on. (More Cricket News)

But bizarrely, the official website still has match 15 of season 6, between Lahore Qalandars vs Islamabad United, scheduled for 8:00 PM start on June 1. Strangely, the venue of the match is mentioned as Karachi.

Here's a screenshot, taken on June 1. 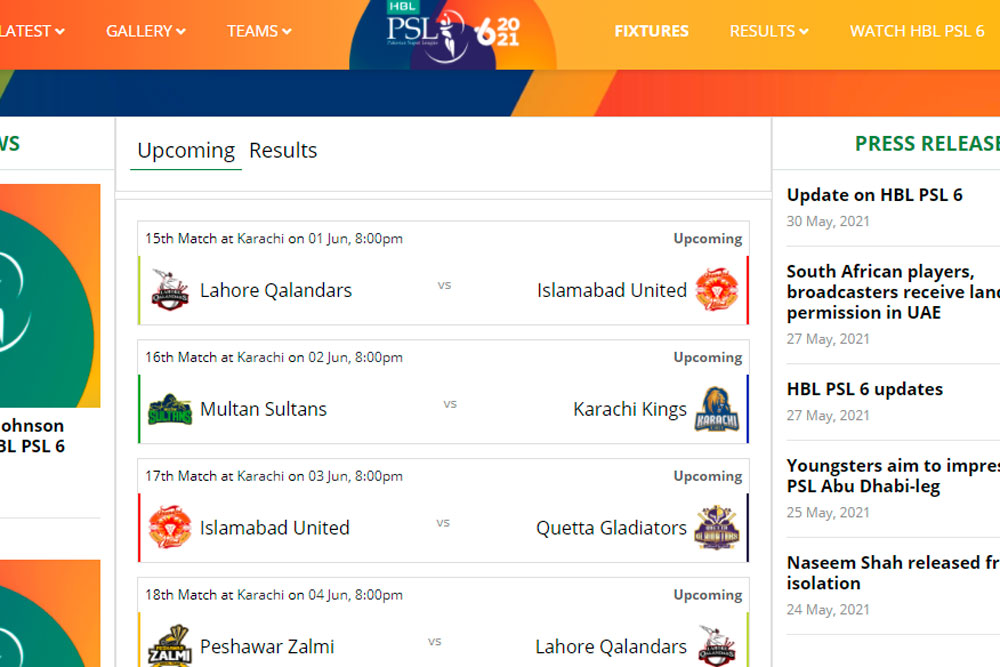 The T20 cricket tournament was postponed on March 4 after a spate of positive Covid-19 tests. Then, only 14 games were completed in the 34-match tournament.

After months of negotiations, the PCB got permission from UAE authorities to conduct the remaining matches at Abu Dhabi's Sheikh Zayed Cricket Stadium.

According to a report in Dawn, the tentative date for the resumption is now June 9 or 10.

But as things stand now, the resumption of PSL 6 is unlikely to happen any time soon with PCB facing logistical issues.

Here's how fans reacted when PCB released a statement on May 30.

The whole thing seems a joke. When are you actually looking to get started?

Pcb has Crossed all the limits of mismanagement this time. They would have been very happy if Zimbabwe had come to Pakistan now no one is taking psl serious. Just pray for psl otherwise i don't think so that next season is going to happen. Shame on pcb

It is now a disgrace how things are being handled by PCB.. pathetic..

EXPLAINER: What Is At Stake As 2022 FIFA World Cup Qualifying Resumes