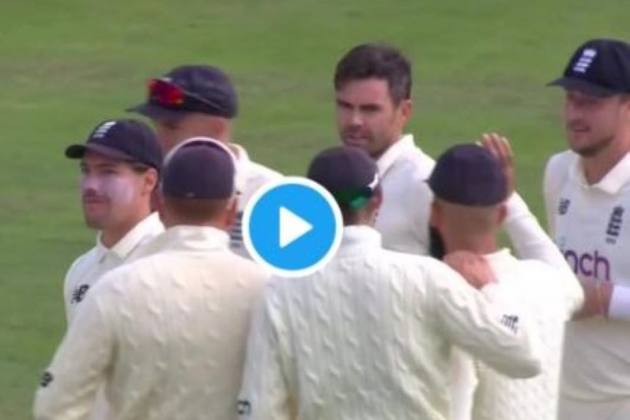 Anderson who was involved in an ugly spat in the second Test with Jasprit Bumrah, was on fire as he accounted for KL Rahul, Cheteshwar Pujara and Virat Kohli.

His wicket of Kohli was a rare moment when the pacer with 600 plus wickets in the longest format let emotions flow.

KL Rahul fell to guiles of Anderson. After bowling a few inswingers, Anderson got one to just hold his line. Rahul went for a drive only to nick the ball to keeper Jos Buttler.

Cheteshwar Pujara was also undone in a similar manner, while Virat Kohli was set up and forced to play a shot outside off.

James Anderson you beauty, what a bowler.pic.twitter.com/Ljkw7FO2e8

Earlier, India captain Virat Kohli won the toss and elected to bat against England in the third cricket Test.

India, as Kohli had said, have gone into the game with an unchanged playing eleven that won the second match at the Lord's.

Kohli said Ravindra Jadeja will bowl a lot more in this game, looking at the dry nature of the surface.

For England, Dawid Malan is back in the Test XI in place of Dom Sibley along with pacer Craig Overton, who replaced an injured Mark Wood.