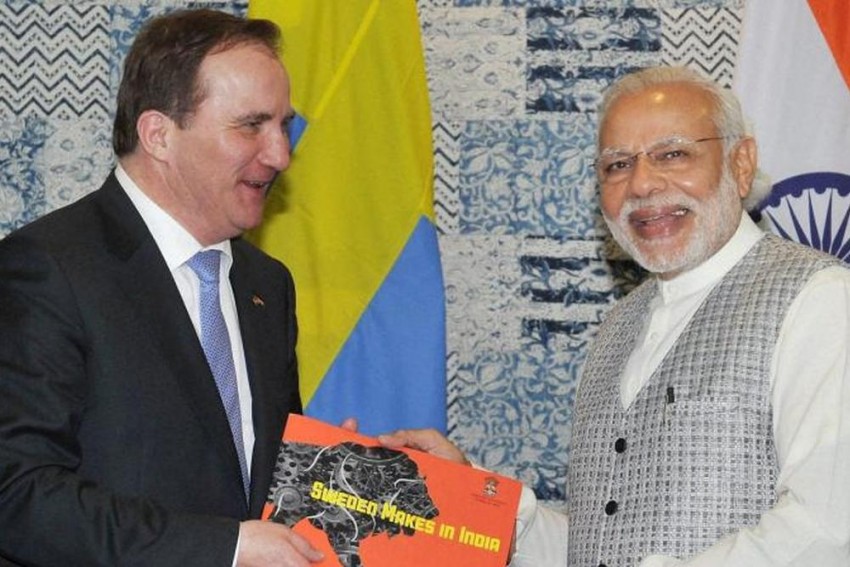 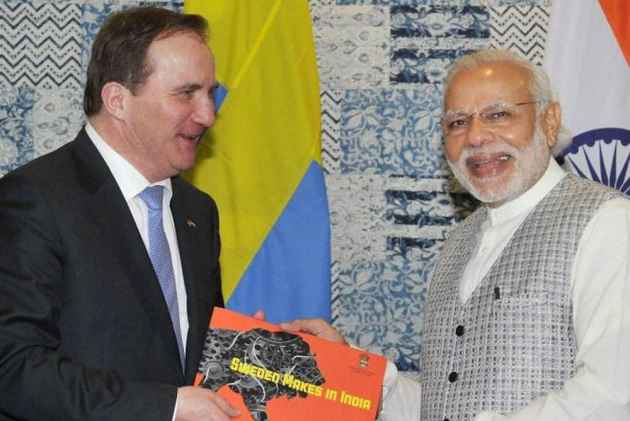 India’s Prime Minister Narendra Modi is visiting Sweden to attend the first India-Nordic summit at Stockholm tomorrow. Besides Sweden, the leaders of Denmark, Finland, and Iceland, as a section of Indian media describes, are lining up to meet Modi. The plans for this summit was not officially confirmed till last moment though Indian media has been speculating about it since Chairman of Saab AB, Marcus Wallenberg’s meeting with Modi in the last week of January 2108. The visit is somewhat sensitive as India has issued a long-awaited request for information on 6 April 2018 to global vendors for purchasing 110 fighter aircrafts, and Sweden’s Saab is seriously interested in  selling to India the Gripen single-engine multi-role fighters. While Sweden is looking at India with a hope to increase its trade, India’s Prime Minister Narendra Modi is eying for attracting investment from Sweden for his ‘Make in India’ campaign. Two years ago, Prime Minister Stefan Löfven had travelled to Mumbai with representatives from 18 Swedish companies to take part in the ‘Make in India’ industrial fair.

Swedish exports to India is quite small, amounts to only $1.4 billion annually and a mere 1 percent of country’s total export. India is Sweden’s 19th most important market for exports of goods. As per the available data, even Swedish export has declined 12 percent in 2015-16 from 2014-15. On investment front, since the beginning of this century, the total size of Swedish investment in India has been only of $1.2 billion and in that time period, Indian investment, particularly by IT companies in Sweden has been of $700-800 million. Sweden is a country with ten million population only, but is quite rich and with annual GDP of $517 billion. Thus, the amount of export and investment is not that significant for the Swedish government to travel extra mile to court Prime Minister Modi. Moreover, there have been a realization by the international community that the Indian economy is not rocking as it was expected to after Modi’s election in 2014. So, the real reason behind Sweden prioritizing India in its diplomatic map in recent years is primarily focused on selling its arms, particularly its fighter aircraft and drones.

A couple of days before Modi’s visit, Swedish Prime Minister Löfven has written an Op-ed for The Times of India, in which while welcoming Modi to Sweden, he is primarily highlighting the bilateral cooperation in business and innovation supporting Modi’s ‘Make-in-India’ and ‘Smart City’ slogans. He fleetingly mentions about commitment of both the countries to sustainable development, human rights and international peace and security, but the focus is primarily economic cooperation. It is quite surprising while for the last four years, her foreign minister Margot Wallström has been famous for coining the concept of ‘feminist foreign policy’ and Sweden formally claiming to work towards protection of human rights and to stand up for minorities and powerless. Wallström in the past has been also critical of Saudi Arabia and Israel for their poor human rights record. Sweden is proud to see itself as a ‘moral superpower’. It was the first country to adopt an ‘open door’ policy for Syrian refugees. One of Stockholm’s suburb hosts more Iraqi refugees than the total number Iraqi refugees the USA has accepted. But, Löfven has conveniently in his Op-ed emphasized business and innovation and tried to avoid to bring up the issues like openness, tolerance, human rights, minority issues, gender equality, which are key to Sweden’s feminist foreign policy but certainly Modi’s soft belly.

Moreover, most surprisingly, Swedish Prime Minister has glossed over the strong foundation of India-Sweden relations, which has been assiduously built, since both the countries established diplomatic relations in 1949. Shared democratic values and adherence of neutrality in Super Power rivalry had brought two countries together. The bilateral relations became extremely close particularly after Alva Myrdal was appointed as her country’s ambassador to India in 1955 and stayed on till 1961. During that period, in 1957, Jawaharlal Nehru visited Sweden and in 1959, Swedish Prime Minister Tage Erlander visited India. Nehru and Myrdal became close friends through their strong commitment to social equality and welfare and also to global peace, and that association brought the two countries together. Alva Myrdal received the Nobel Peace prize in 1982 for her work in nuclear disarmament in the United Nations and she credited Nehru’s ideals of peace and social justice for influencing her to work in this field.

The end of Nehru era did not end that strong foundation of bilateral relations which had been built for years. In 1972, Indira Gandhi had travelled to Stockholm to attend the UN Conference on Human Environment and also to meet Swedish Prime Minister Olof Palme. Both the leaders became strong voices against Vietnam War and also worked against Apartheid in Southern Africa. However, they have also a long partnership at the global level in calling for universal nuclear disarmament. Unlike India, Sweden is a signatory to NPT, but that had not stopped both the countries to lead a global movement against nuclear weapons. In May 1984, Indira Gandhi and Olof Palme joined with Miguel de la Madrid of Mexico, Julius Nyerere of Tanzania, Andreas Papandreou of Greece and Raul Alfonsin of Argentina had launched the “Six-Nation Initiative,” an idea first mooted by “Parliamentarians for World Order.” After Indira Gandhi’s assassination in October 1984, Rajiv Gandhi joined the group; and he also became a member of the Palme Commission, to monitor disarmament issues in the 1980s. In January 1986, Olof Palme had travelled to India to take part in the Six Nation Initiative which was crowned by the New Delhi Declaration on Peace and Disarmament. When Palme fell to assassin’s bullets, Rajeev Gandhi described it as loss of a good friend and had even declared a national day of mourning in the country. There is no doubt that the relations between India and Sweden and India’s Gandhis and Sweden Palme in 1980s were extremely strong and cooperative and driven by a common vision of global peace, security and development.

The relationship between India and Sweden is not of four years old and not driven by the mutual economic interest only. For decades, both the countries have worked together and have sacrificed for their deep commitments to global peace and democratic values. It is unfortunate that Swedish Prime Minister has tried to overlook that rich history and strong foundation of the bilateral relations, instead he has focused only on the cooperation with present regime and emphasizing on business and investment. Any bilateral relations to be sustainable in the long run, it has to respect the history and needs to look beyond short-term economic interest and political convenience.