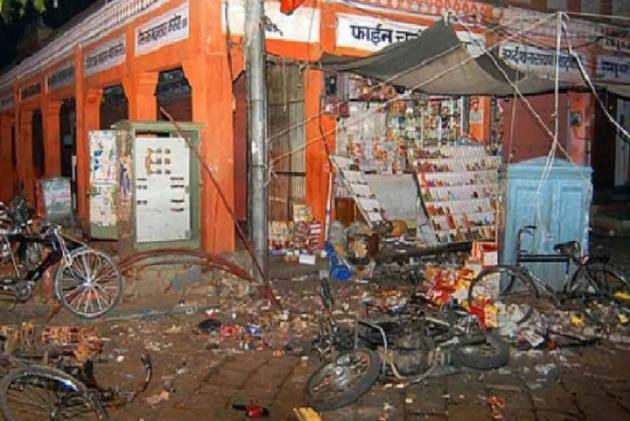 "It is a mixed feeling to see my husband being released after 12 long years of fight. These years were like a nightmare for me and our three children. But now we are hoping for some relief, especially, after seeing the high court's order", says Sadaf, wife of Shahbaz Ahmad, one of the accused in the Jaipur bomb blast who was granted bail on Thursday by Rajasthan high court.

"Our youngest daughter was only two months old at the time when Shahbaz was arrested. She has no memory of her father. Similarly, our eldest son who is now 15 years old was only three years old at the time his father was arrested. He also has faded memories of him. For me these 12 years passed while raising our children, looking after our ailing parents and nevertheless waiting for my husband return. No one can return these 12 years to me and my children. My husband Shahbaz lost his mother while he was in jail. Every time I would go and meet, he would be in tears", added Sadaf (35), who runs a small boutique in Lucknow.

On Thursday the Rajasthan High Court granted bail to Shahbaz (42). While expressing surprise at the fact that Ahmad was not arrested in the case for 12 years even though he was under custody, a single bench of Justice Pankaj Bhandari while granting him bail observed, "It is indeed surprising that when the petitioner was languishing in jail (I am using the term "languishing" because petitioner remained in custody for twelve years and ultimately found not guilty in all these cases) as to why the petitioner was not arrested in this case when he remained in custody for twelve years, is a query to put up in front of Additional advocate general, to which the advocate general is clueless".

A four-page bail order further reads, "Learned Additional Advocate General was not in a position to appraise the Court as to why petitioner has been arrested in the present F.I.R. when he was held not guilty in eight similar FIRs''. Shahbaz has been under custody since 2008 and was arrested again in a case related to Jaipur blasts, even after the court found him innocent in 8 other similar cases.

"It is further contended that all the nine FIRs are of the year 2008, are relating to bomb blast cases. Charge-sheet was filed in only eight cases and in all eight cases, the petitioner has been acquitted. There is no reason for arresting the petitioner after twelve years of lodging of the F.I.R. when the allegations in all the FIRs are the same", reads the judgement.

In connection with Jaipur 2008 serial bomb blast, Shahbaz Ahmed, was charged with sending an e-mail claiming responsibility for the blasts. Ahmed was the first to be arrested three months after the blast.

"Shahbaz could have walked free in December 2019 after being acquitted in the eight cases but he was sent to police custody again about the case which had been kept dormant all that while without filing the charge sheet. However, in June 2020, the police submitted a charge sheet under Article 20(2), Section 300 CrPC and 71 IPC. Following which Ahmad filed an application in the trial court seeking discharge from the case on the ground of double jeopardy' claiming that the allegations were same and identical as the other cases", Mujahid Ahmad, the advocate of Shahbaz told Outlook.

In March 2019 another FIR was lodged against Shahbaz registered alleging that he had assaulted prison officials to obstruct a search by them. Shahbaz also filed a PIL in Supreme Court in which he claimed that it was he who was the victim of prison torture and also highlighted the lack of basic infrastructure in the jail, lack of facilities, torturing of inmates and demands for installation of a complaint box and a mandatory visit of district judge and a senior IAS officer the grievance redressal of the jail inmates.

In January 2021 the Supreme Court while granting him the bail observed that the specific facts and circumstances of the instant case are correct and the petitioner had received 11 injuries.

Moreover, the SC bench comprising Justices NV Ramana, Surya Kant and Aniruddha Bose directed the Rajasthan government to conduct a fact-finding survey spearheaded by a senior IAS officer and take action against the police officials who will be found guilty.

Action should be taken against the cops

Describing the police action as full of vindictiveness, People’s Union for Civil Liberties General Secretary Kavita Srivastava told Outlook, "The Rajasthan police has spoiled twelve years of Shahbaz and his family. Their struggle was immense. We demand action to be taken against the cops who kept him inside despite knowing that he is innocent. Also as directed by the SC Rajasthan government should soon set up a committee to gauge the irregularities happening inside the jail".

As per the order, Shahbaz shall be released on bail providence furnishes a personal bond in the sum of Rs.1,00,000 together with two sureties in the sum of Rs.50,000/- (Rupees Fifty Thousand only) each to the satisfaction of the Trial Court with the stipulation that he shall appear before that Court and any Court to which the matter be transferred, on all subsequent dates of hearing and as and when called upon to do so

The blasts rocked Pink City on May 13, 2008. Nine bombs exploded at eight locations in Jaipur’s crowded old city, amidst the rush hour, killing 71 and injuring 185. The first blast took place at Manak Chowk, followed by Chandpole Hanuman temple, Sanganeri Gate Hanuman temple, Johri Bazar, Badi Chaupar, Choti Chaupar, Tripolia, Sargasuli. Moreover, two of the blasts took place next to the Police station at Manak Chowk and Kotwali police station According to the charge sheet filed by the special investigation team (SIT), the eight bombs were detonated between 7.20 pm and 7.45 pm. While the ninth bomb was made dysfunctional by the police. The bombs were strapped to bicycles, contained ammonium nitrate with ball bearings, and were wired to timing devices, mentions the charge sheet.

The Rajasthan high court had set up a special court for the trial in the blast cases in the mini secretariat Bani Park area, where the case was being heard. The trial was completed in the court with arguments from the defence as well as the prosecution had come to an end recently. During the trial, the prosecution has submitted the statements of around 1300 witnesses.

In December 2019 four convicts - Mohammad Saif, Mohammad Sarwar Aazmi, Mohammad Salman and Saifurrehman – were given a death sentence by a special court under sections 302 and 16 (1A) of the Prevention of Unlawful Activities Act (UAPA) act of IPC.