Gandhi's invite signals a realisation that Congress must take lead in forging Opposition unity at a time when regional satraps like Mamata Banerjee, Sharad Pawar are already gaining momentum. 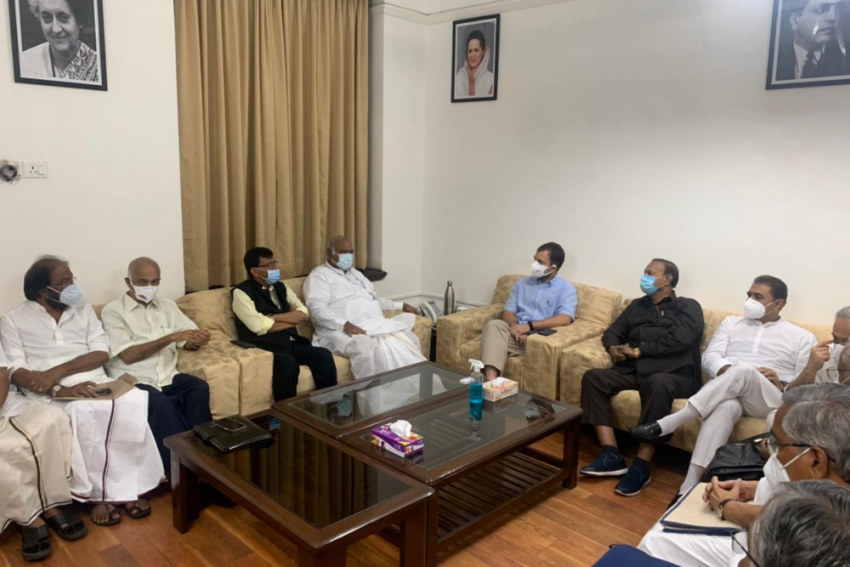 Former Congress president Rahul Gandhi will host leaders of various Opposition parties for breakfast at the Constitution Club, situated near the Parliament complex, on Tuesday. Members of both houses of Parliament from various Opposition parties, including the Trinamool Congress, NCP, DMK, RJD, Shiv Sena and Left parties, have been invited for the interaction, scheduled to begin around 9.30 AM, aimed at further streamlining the Opposition’s strategy to counter the Centre during the ongoing monsoon session.

Given the continuing logjam in Parliamentary proceedings over a united Opposition’s demand for a detailed discussion on the Pegasus snooping row and the Centre’s refusal to it, sources privy to the development tell Outlook that it is also likely that a plan for Opposition MPs to gather at a different venue outside the Parliament for a parallel session may also be discussed. Several Opposition MPs Outlook spoke to say their parties were left with no option but to raise issues of national interest – Pegasus snooping scandal, the ongoing farmers' protests and the Centre’s alleged mismanagement of the Covid pandemic – at a “parallel session of representatives of nearly 60 per cent of India’s voters.”

The central government “is not prepared to have these debates inside Parliament and presiding officers of both Houses have repeatedly turned down notices for adjournment in the Lok Sabha and suspension of proceedings in the Rajya Sabha to allow discussion on these issues... how will the Opposition carry out its duty of holding the government to account if it is not allowed to speak in the only forum available for debates, that is the Parliament,” said a senior Rajya Sabha MP, while confirming that the possibility of convening a ‘parallel session’ will be discussed during Rahul’s breakfast meeting on Tuesday.

'Govt Put Weapon In Our Phones': Rahul Gandhi After Oppn Meet On Pegasus

Congress Will Be The Fulcrum Of Opposition Unity: Ashwani Kumar

While the stated reason for Rahul’s breakfast tête-à-tête with Opposition colleagues is to firm up a joint strategy on the Pegasus issue and other matters that the Opposition wants to corner the Centre on, Congress sources say the Wayanad MP is also eying the emerging political scenarios that go beyond the ongoing Parliament session.

Rahul’s invite also signals a realisation on his part that he and the Congress must take the lead in forging Opposition unity at a time when talks of building a federal front with regional satraps such as Bengal chief minister Mamata Banerjee and NCP’s Sharad Pawar in lead roles has been picking momentum, says a Congress leader. Ever since Parliament convened for its monsoon session on July 19, Rahul has shown a visible interest in reaching out to Opposition leaders; something that the Congress leadership previously would leave to its leaders in both Houses of Parliament and some other veterans. Last week, Rahul had two meetings with Opposition leaders to discuss a common floor strategy for the Parliament session and also led the Opposition MPs at a media interaction during which he underscored that the Opposition was united in its demand for a detailed debate on the Pegasus row.

Congress sources say Rahul’s eagerness to take centre stage in the effort to keep the Opposition bloc united has also been shaped to some degree by his interactions with poll strategist Prashant Kishor, who is likely to join the Grand Old Party in a key role when interim party chief Sonia Gandhi carried out a “drastic revamp of party organisation sometime after the Parliament’s monsoon session ends on August 13.” Kishor, who has been a poll strategist for Opposition parties like the Trinamool, DMK, AAP and the YSR Congress in recent years, has been stressing the need for all Opposition parties to bury their differences and come together if they wish to defeat the BJP in 2024. To this end, Kishor has been discussing a blueprint for Opposition unity with the Gandhis as well as other Opposition satraps like Pawar, Banerjee and others ever since the recent assembly polls in Bengal saw the BJP suffer a humiliating defeat by the Trinamool.

Last week, Banerjee had also called on Sonia Gandhi and discussed the need for Opposition unity. Rahul too was present at this meeting. Sources say the Congress high command and Kishor have also been working to clear the misgiving the party and Trinamool have against each other. Signs of a thaw between the Congress and Trinamool had begun to show ever since the former's Bengal unit chief Adhir Ranjan Chowdhury, a bitter critic of the Trinamool chief, declared that his party would not put up a candidate against Banerjee in the Bhawanipore by-poll. Banerjee's meeting with Sonia and Rahul last week seems to have cleared some other issues between the two parties. A direct corollary of the rapprochement, sources say, was the Trinamool's willingness to honour Rahul's breakfast invite tomorrow after the party's leaders skipped the meeting of Opposition parties that Rahul held last week.